Looking at bat poop can be cool! Veronica extracts DNA from guano to learn what our bats are eating - which is often agricultural pests! 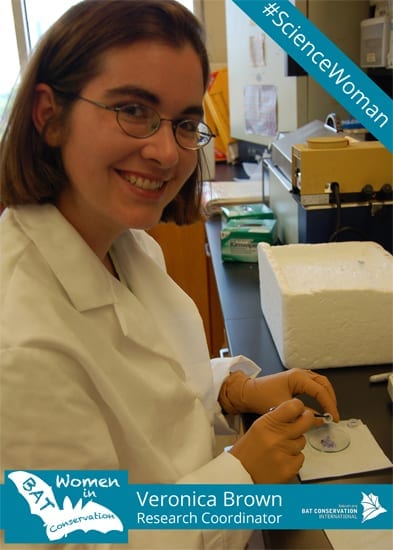 Organization: The University of Tennessee, USA

I have always looked up to Jane Goodall.  Her early work with chimpanzees paved the way for women field scientists.  I was very proud when my eight-year-old daughter selected a book on Jane Goodall and was excited to talk to me about the things Dr. Goodall did.

I am more of a lab person than a field person. I have worked with bats for almost 14 years, and over that time I’ve worked on a variety of genetic projects, including population genetic studies, paternity analysis, and ecosystem services. The main interest of my work is showing the benefit of bats to the agricultural ecosystems in which they live. To do this, I spend a lot of time analyzing guano. Modern molecular techniques allow us to extract DNA from feces relatively easily and this is the most effective way to learn what a bat is eating while flying in the sky at night. A focus in our lab is showing that bats consume major crop pests, therefore providing humans with “ecosystem services.” I am particularly interested in non-invasive sample collection techniques.  This means finding ways to collect samples for DNA analysis without disturbing the bats. My Masters work showed that bats consume several agricultural pests of pecan crops. I did this using guano collected under bat houses in organic pecan orchards. 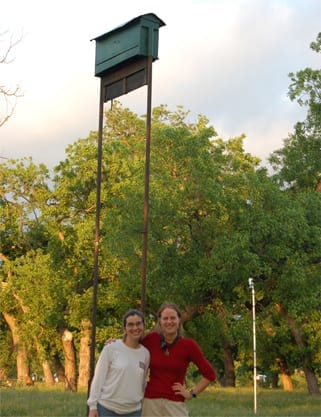 I have been involved with BCI in several ways. When I was in graduate school, I received a student grant to support my research looking at the diet of bats in bat houses on organic pecan orchards.  Since then, I have written articles for BCI on the benefits of bats in agriculture and have represented BCI at talks on the same subject.

What is the most satisfying part of your job with bat conservation?

The most satisfying part of my job is getting to teach kids about how great bats are. I really enjoy talking to school and scout groups about how important bats are to every ecosystem in which they live. I like to start my talks by asking who is afraid of bats and I almost always manage to change the opinion of kids who raise their hands. Bats are so diverse that I can usually find something to interest everyone. I also like to tell kids that after everything they learn, they will be advocates for bats because kids are so much more open-minded than adults. I love seeing kids getting excited about science and conservation! 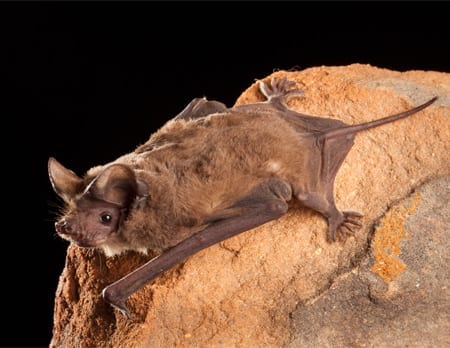 My favorite species of bat is the Mexican free-tailed bat, Tadarida brasiliensis.  This species of bat has been studied by many people in our lab for years and is now moving into the southeastern United States, right in our backyard.  For the last few years, we have been tracking the range expansion of this bat into the Tennessee Valley and get excited when we find new colonies.  These bats are one of the most widespread species in the Americas, spreading across both North and South America and living in diverse habitats in populations that can have millions of individuals.  Not to mention that Mexican free-tailed bats are adorably cute with their hairy toes, dog-like faces, and round ears!

My advice for people wanting to get involved with bat conservation is to look to local universities, zoos, parks, and state research groups that might need volunteers. Don’t try and catch bats on your own. As white-nose syndrome spreads, so does the number of people doing research and therefore the amount of help needed grows. BCI is a great resource as well. Putting up bat houses is another way to get involved in bat conservation.  Just be sure to put bat houses in areas of low human traffic so that both the bats and the people will stay safe.