Meet Tigga, an inspirational #ScienceWoman who is leading the advancement of bat research and conservation efforts in Southeast Asia. 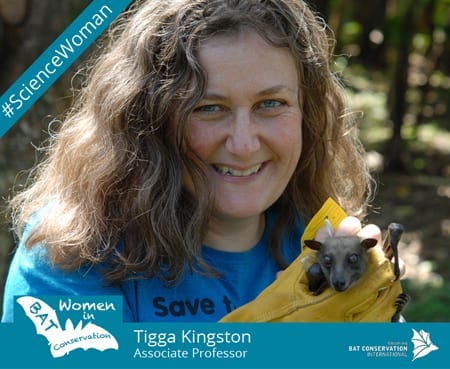 My research focuses on the diversity and conservation of bats in Southeast Asia. Bat diversity in the rainforests of Southeast Asia is extraordinary. Over 70 species can live together in a single forest, with some 60+ species eating insects. The mechanisms that allow so many species to coexist while essentially eating the same thing have always fascinated me. So I’ve worked for the last 20 years with colleagues and students in Malaysia on the bat fauna of a large tract of rainforest (Krau Wildlife Reserve), slowing building up a picture of how bat species partition resources. We’ve worked on the role of bats’ echolocation, morphology, their choices of roosts, and their separation in space, in structuring these species-rich assemblages.  Given the rapid rate of forest loss across the region, this research has inevitably led to consideration of whether and how the amazingly diverse forest bats of Southeast Asia can survive in human-modified landscapes. So work led by colleagues and my students looks at how bats respond to fragmentation, agriculture, and disturbance at their cave roosts.

There are over 340 bat species in Southeast Asia, but a least a fifth are threatened by combinations of extensive habitat loss, cave disturbance and, for many species, hunting as a source of bushmeat or traditional medicine. In 2007, I launched the Southeast Asian Bat Conservation Research Unit (SEABCRU) to provide an organizational framework to accelerate the advancement of bat research, and to coordinate conservation efforts. The SEABCRU is open to anyone interested in bat conservation and research, and the network is organized around four conservation research priorities: taxonomy and systematics, flying fox conservation, cave-bat conservation, and forest-dependent bat conservation. With support from the National Science Foundation we are implementing a regional assessment of the distribution of Southeast Asian bats, and have organized a series of workshops and conferences across the region (events to date in Thailand, Indonesia, Myanmar, Vietnam, Cambodia, Malaysia) to standardize research methods and promote interaction and networking. 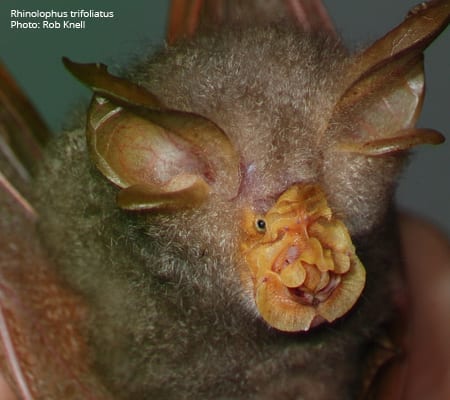 What’s your favorite species and why?

Any of my graduate students (and probably quite a few other people as well) can tell you this – Rhinolophus trifoliatus! R. trifoliatus or the Trefoil Horseshoe Bat is an insectivorous rainforest bat with the core of its range centered on Malaysia, Thailand, Sumatra and Borneo. It is one of the relatively few species of bat that is solitary, and it just roosts suspended under large palmate leaves (like rattan) in the forest understory, quietly dangling around 2m or less above the forest floor. Because it has no protection from the elements, beyond the shelter of the leaves above it, it is fantastically fluffy with long grey fur that can be curly in older individuals. Even cooler is that fact that it has a yellow trim – its ears, noseleaf, elbows and even knees are yellow. As a forest-dependent species it does not respond well to habitat loss, so I worry for its future.

What is the most satisfying part of your involvement with bat research?

Building bat conservation research capacity and facilitating international networking. I take great satisfaction in seeing young researchers, especially those from developing nations, become inspired by bats and motivated by the conservation issues they face to pursue aspects of bat research that directly or ultimately contribute to bat conservation. Capacity building is a major part of the SEABCRU’s activities, and the workshop and conference series has brought together > 300 people from 20 countries, and has really ignited a young generation of bat researchers. It is also great to facilitate interactions and networking among existing bat researchers, some of whom have been working in isolation, or with limited awareness of what everyone else is up to in the region. Because the SEABCRU is structured around themes – the four research priorities — people from different countries come together to share their expertise and train others. New friendships and new collaborations arise as a result, and that is wonderful to see. I was recently appointed as the IUCN SSC BSG co-chair for the Old World, so I am excited to work with colleagues and conservationists throughout Old World to develop, sustain, and ultimately connect up regional networks.

First know that there are many ways to get involved with bat conservation that can be responsive to the time you might have available and your expertise, you don’t need to commit your entire life to the cause! Second, I think the key is to connect up and network with others concerned with bat conservation. There might be a specific local bat conservation issue that needs to be addressed and you can help with, or you might think more broadly about educating the public about bats (perhaps going into schools to give bat talks to kids, leading bat walks at nature reserves or local parks), or join a citizen science initiative monitoring bat populations. If you have a bit more time, you might see if local universities or NGOs have any bat researchers and volunteer in some way – there are a lot of us out there and a lot of work to do!  For students, with bats facing the myriad of threats across the world, there are many avenues for conservation research, especially when you consider that there are around 1300 species of bats, each with their own issues. Small steps big consequences!