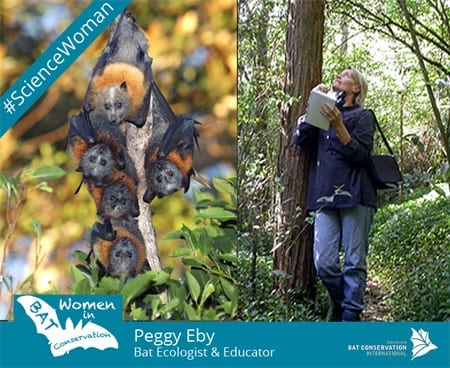 My goal is to improve conservation and management of Australia’s flying foxes. I work with a range of people to conduct research and use the outcomes to advocate on behalf of the animals. Australian flying foxes are ecologically complex and in need of targeted conservation actions. However, conflict with fruit growers and people who live near roosts can block conservation initiatives, so education and conflict resolution are additional focuses for my work. I communicate with wildlife and land managers, stakeholder groups, am committed to public education, and hold formal and informal advisory positions with government agencies. In recent years I’ve become involved in an unusual interdisciplinary collaboration with practicing artists, architects, educators, lawyers and others to develop new ways to engage the wider community in the conservation challenges we face.

What is your most exciting moment in your conservation career?

I have been studying flying foxes for many years and there are several moments that stand out. I’d like to share two: an ‘aha’ moment and a moment of inspiration. 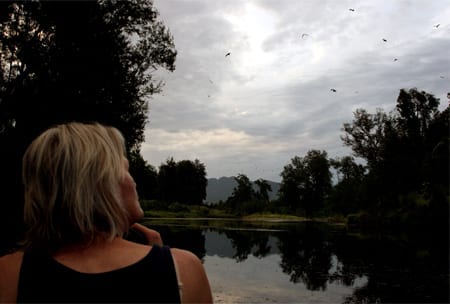 My doctoral research was designed as a study of seed dispersal by flying foxes in the subtropical rainforests of eastern Australia.  In the first season of field work we radio-tagged 20 animals using newly-designed collars and telemetry packages that we expected to last for six months. The aim was to document feeding behaviors. However, within six weeks, we had lost contact with 80% of the study animals and didn’t know whether the collars had failed or the animals had moved. We searched roosts within about 100 km of the study site and couldn’t find them. It was looking grim. Independently of this I visited a friend living about 400 km south who wanted to show me the spectacular fly-out from a large roost. I took the telemetry gear along and to my amazement found a third of the missing animals at that one site! We hadn’t realized how far Australian flying-foxes migrated. I added aerial tracking to my field program and expanded the topic to include a study of migration! The insights and questions generated by that work formed the basis of 25 years of intriguing research. I sometimes consider how different my career may have been had I not visited my friend.

The second experience was very different. Between 1998 and 2004, I coordinated a series of 11 synchronous, range-wide surveys of grey-headed flying foxes. Teams of people estimated the number of animals that exited roosts on dusk (flying foxes fly more slowly than many micro-bats). The surveys were conducted by volunteers and a key group, primarily women, took responsibility for organizing and training teams of people to assess the roosts in their local areas. Without their support, the surveys would not have been possible. Ultimately, over 1,000 people participated in this project and it proved to be the single most successful act of citizen science and public engagement that I have been involved in. I remember standing in my counting position at a roost in the middle of Sydney on the night of one survey, with the lights of the city office buildings as a backdrop. It was a clear, still night and as the first animals emerged from the vegetation and flew overheard I thought of all the people that were gathered at roosts dotted along the coast and hinterland of south east Australia – some standing in remote forests, some in farmland, some, like me, in cities – all full of anticipation, all understanding the importance of the contribution they were making, and all experiencing the measured, silent wonder of an exit flight. 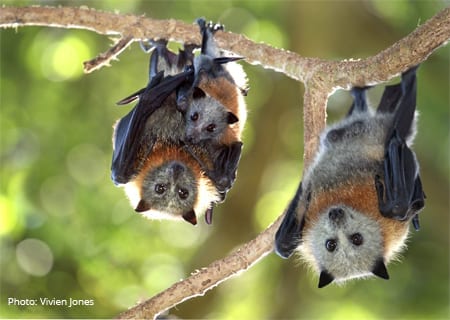 What’s your favorite species and why?

My unashamed favorite species is the grey-headed flying fox, Pteropus poliocephalus. This is the species I have worked on for most of my career. I’ve spent untold hours observing individuals in their roosts and following them both when they feed and when they migrate. I’ve watched them mate, give birth and raise their young and I’ve documented the impacts of extreme heat and food shortages. They are endlessly fascinating, engaging and attractive animals.

Most conservation outcomes occur incrementally, require long-term commitment, and cannot be achieved by a single person or group. My advice is to set clear goals, involve other interested parties, gather information, garner support from the wider community, share resources, learn the ‘rules of engagement’, and be patient and persistent. In my experience, the most effective advocacy occurs when an alliance of people with diverse backgrounds and perspectives work together for an extended period of time – scientists, interest groups, people with local knowledge can all play an important role. Public support (or at least lack of opposition) can be key to success, so programs of public education about bats and engagement with opponents are often important. It can also be critical to understand the legislative and political constraints that influence decision-makers, so that approaches to them can be framed (and timed) accordingly. Remember, it’s more likely to be a marathon than a sprint. Try not to be discouraged by setbacks.