Latest on Bats & COVID-19
Home News Press Releases WHITE-NOSE SYNDROME CONFIRMED IN IOWA; MORE THAN HALF OF ALL US STATES NOW AFFECTED

White-nose syndrome has been confirmed in Iowa. The disease of hibernating bats, having killed more than 5.7 million bats since 2006, continues to march westward. 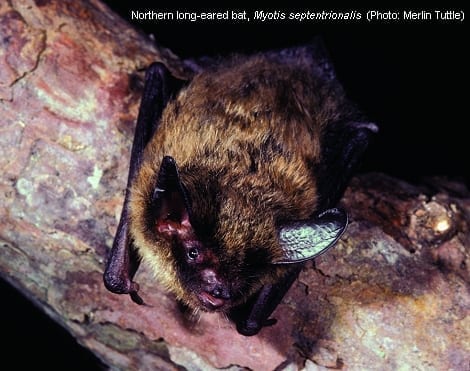 White-nose syndrome has been confirmed in Iowa today by the Iowa Department of Natural Resources, making it the 26th state to confirm the disease that has killed more than 5.7 million bats since 2006.

Three bats collected in Des Moines County were confirmed to have white-nose syndrome (WNS). Two little brown bats and one northern long-eared bat, a species newly listed as nationally threatened, were observed near a cave entrance with visible signs of WNS. The USGS-National Wildlife Health Center in Madison, Wisconsin confirmed that the bats had WNS.

Pseudogymnoascus destructans (P. d.), the fungus that causes white-nose syndrome, had been known to be present in the state since 2011, but until now no bats in the state had been confirmed with the disease.

“Although we are saddened by this news, we are not surprised” says Katie Gillies, Director of the Imperiled Species Program at Bat Conservation International. “White-nose syndrome continues to march westward and is having a devastating impact North American bats. BCI and our many government and scientific partners are working tirelessly in trying to develop tools to try to stop the spread of this disease”.

BCI continues to be the largest non-government funder of WNS research in the United States having invested $386,613 in research grants to understand the disease and develop tools to stop its spread.

Pseudogymnoascus destructansis a cold-loving white fungus typically found on the faces and wings of infected bats. It causes bats to awaken more often during hibernation and use up the stored fat reserves that are needed to get them through the winter. Infected bats often emerge early from hibernation and are often seen flying around in midwinter. These bats usually freeze or starve to death.

WNS is not known to pose a threat to humans, pets, or livestock. It is transmitted primarily from bat to bat, but humans may inadvertently carry fungal spores into caves on clothing and caving gear. Citizens in North America can help bats by following all decontamination requirements if entering caves and continuing to avoid disturbing bats, especially during hibernation. Communities can also help fight WNS with donations towards WNS syndrome research. Please make a contribution.