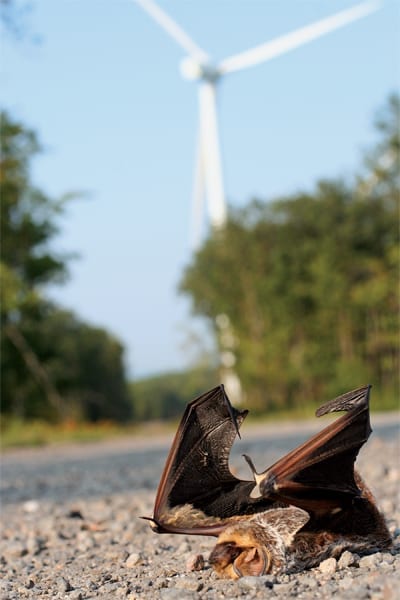 Wind turbines can negatively impact bats at facilities around the world, endangering bat populations and limiting the economic benefits of these species, such as controlling agricultural insect pests. Bat Conservation International’s (BCI) efforts to address the problem of protecting wildlife while enhancing the responsible operation of this source of clean energy was boosted last week with funding from the US Department of Energy (DOE) for our acoustic bat deterrent research program. The DOE announced more than $1.75 million for five projects that will develop and demonstrate technologies to reduce the impacts of wind energy facilities on bats.

Current methods to reduce the impact of wind turbines on bats alter the operations of wind turbines under certain meteorological conditions. Commonly called operational minimization, this strategy involves turning turbines off when bats are most active, creating financial constraints for the wind industry. By reducing bat activity and the ability of bats to capture prey items near turbines, ultrasonic acoustic deterrents (UADs) may allow wind energy facilities to operate normally, providing an economically feasible and ecologically sound approach to reducing bat fatalities.

The hoary bat, Lasiurus cinereus (pictured) and silver-haired bat, Lasionycteris noctivagans, are the two most impacted species by wind turbines in the U.S. and Canada, with the two species accounting for 56 percent of all reported fatalities between 2000 and 2011. Preliminary field tests of the UAD design at an operational wind energy facility indicated as much as a 64 percent decrease in bat fatalities at deterrent-equipped turbines.  A significant reduction in hoary bat and silver-haired bat fatalities were also reported. 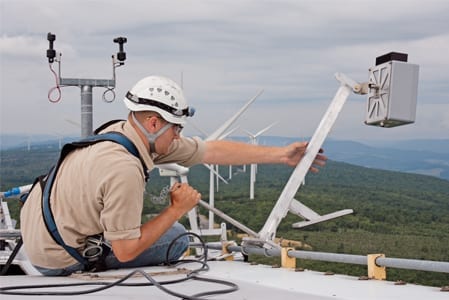 Despite the early success, further research and development is needed to quantify the effectiveness of UADs. The grant from the DOE will allow BCI researchers to conduct reliability tests for the device and carry out a full-scale validation of its effectiveness at a wind energy facility. The project will also compare the acoustic deterrent’s ability to reduce impacts to bats versus operational minimization-or turning turbines off when bats are most active—the primary impact reduction strategy currently in use.