The North American Bat Monitoring Program (NABat) wins an award for BCI, the United States Geological Survey and other partners from around the world 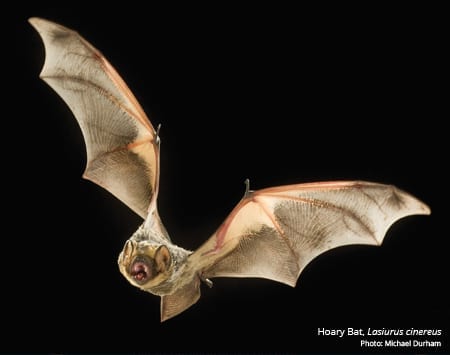 Researchers from Bat Conservation International, the United States Geological Survey and other partners were recognized this week with the U.S. Forest Service Wings Across the Americas Research Award for their contributions to the North American Bat Monitoring Program (NABat).

“Research on bats is important not only because they are vital to the well-being of ecosystems, but also it is in the best interest of the economy due to the importance of bats for pest control and pollination of native and agricultural plants,” said Kinsinger. “USGS has focused considerable research on issues threatening the health and well being of bat populations in North America. Our participation in NABat provides valuable scientific information for bat conservation.”

Wings Across the Americas is an international program of the U.S. Forest Service that works with a wide range of partners here in the United States and overseas to conserve habitats and populations of birds, bats, butterflies and dragonflies. The award recognizes outstanding conservation work by U.S. Forest Service and partner agencies.

The novelty of the NABat program is a vision for collaborative monitoring of an imperiled species group with a sound statistical underpinning allowing for species distribution modeling across broad geographic regions. Participating BCI and USGS researchers provide specific expertise on statistical survey design, statistical analysis of bat acoustic and colony count data and database development informed by experience with many wildlife species such as bats, birds and amphibians.

“The ability to track and monitor trends in our North American bat populations is a huge leap for conservationists and managers. We are losing bats at an alarming rate due to impacts from white-nose syndrome and other stressors” said Bayless. “NABat is a tool that will allow us, for the first time ever, to track bat populations at a continental level. BCI is proud to have contributed to the development of this tool and we will continue to work with our partners on its implementation.”

NABat was developed in conjunction with specialists from other agencies, universities and NGOs in the United States, Canada, the United Kingdom and Mexico in response to growing concerns over threats to bats from continuing and emerging stressors including habitat loss and fragmentation, white-nose syndrome, wind energy development and climate change.  There are currently no national programs to monitor and track bat populations in North America, and NABat seeks to assist in development of such programs that will provide managers and policy makers with the information they need to effectively manage bat populations, detect early warning signs of population declines and estimate extinction risk.

Efforts to date include four workshops and discussions supported by the Landscape Conservation Cooperatives National Council and the National Institute for Mathematical and Biological Synthesis to develop a national monitoring program. These workshops were attended by scientists and researchers from multiple agencies including FWS, USGS, USFS, NPS, University of Calgary and the Canadian Wildlife Service.  In addition, the framework for NABat entitled “A Plan for a North American Bat Monitoring Program (NABat)” will be published in May 2015.