Gomantong Cave is home to over a million bats from a variety of bats species, including the wrinkle-lipped bat, the Philippine horseshoe bat, and the fawn leaf-nosed bat. These bats form a mass exodus from the cave every night at sundown, heading into
the jungle to feed on insects, fruit, and nectar. These bats share the cave with birds called swiflets, whose nests are prized as an ingredient in bird’s nest soup. The cave is also home to billions of cockroaches and beetles, who live in the massive
piles of guano the bats produce. The entire cave is a massive ecosystem that relies on its populations of bats and birds. 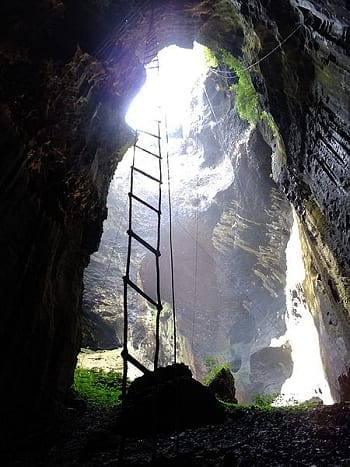 The three species of bats living in the cave, are very similar in how they feed and roost. The wrinkle-lipped free-tailed bat (Chaerephon plicatus) has a wide range all throughout Southeast Asia, and like many other bats likes to live in caves
and abandoned structures. This species is an insectivore, and forages for its food in the jungle surrounding the cave. While forest harvesting and other human activities are impacting its foraging habitat and roosting sites, the wrinkle-lipped free-tailed
bat is not of grave concern for conservationists.

The second of the three bat species found within the cave is the large-eared horseshoe bat (Rhinolophus philippinensis). It is found throughout Southeast Asia and Oceania, and takes another important role in the Gomantong ecosystem.
This bat uses echolocation to find its prey, and forages close to the ground. The large-eared horseshoe bat is very similar to other horseshoe bats, but not much else is currently known about it. Due to its large range, this bat is not considered endangered
or threatened.

Luckily, for the bat, bird, and insect inhabitants of Gomantong, the cave is heavily protected by the local government. Unfortunately, this is not the case in many areas of Southeast Asia. Indonesia, Malaysia, and areas of Laos and Thailand are areas
of especially high concentrations of bat species, and many of their bats are threatened by habitat loss and destruction of roosting sites.