New industry guidelines aim to save thousands of bats each year by idling turbines at low wind speeds during peak bat migration season. 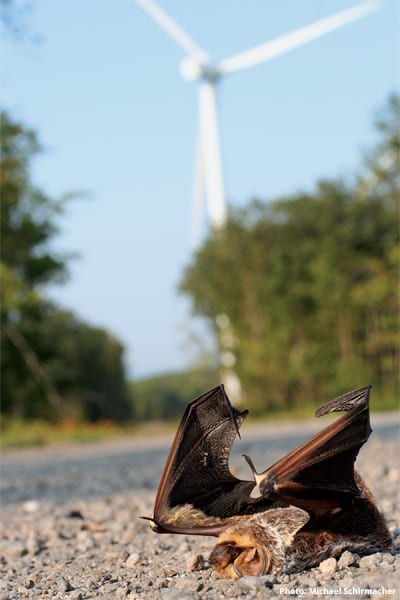 On the eve of National Wildlife Day, the American Wind Energy Association (AWEA) has announced the first industry-wide best management practice for reducing wind turbine-caused bat fatalities. This new operating protocol is voluntary and involves limiting the rotation of turbine blades during low-wind speed conditions, prior to energy production, through the fall bat migration season.

The new protocol stems from more than a decade of collaborative research through the Bats and Wind Energy Cooperative (BWEC), of which both Bat Conservation International (BCI) and AWEA are founding members. This work has shown that altering turbine operations under low wind conditions, when little to no electricity is generated, can reduce the risk of wind turbine caused bat fatality.

“The implementation of this industry-wide practice is an important step and demonstrates how far the wind energy industry has come on the issue of bats.  We believe this could substantially reduce bat fatalities at participating facilities across the country” says BCI Executive Director, Andrew Walker.

“BCI is eager to help the wind industry put these new protocols into practice and begin real, on-the-ground conservation of bats, many of which have no protection under current federal law.”

The announcement from U.S. wind energy industry signals the recognition of the importance of bats across the globe, with the World Bank also recently proposing similar best management practices to help reduce bat mortality at wind energy facilities worldwide.

In the spirit of National Wildlife Day, BCI applauds the U.S. wind energy industry for taking action for bat conservation.

“BCI views these best management practices as significant progress toward bat conservation with the potential of reducing thousands of wind turbine-caused bat fatalities in the United States. Going forward, we look to both conservation and industry leaders to see similar measures implemented around the world” said Walker.