The birds and the bees may rule the daytime, but as soon as the sun sets, it is the bats that get to work pollinating.  Worldwide, over 500 species of flowers in at least 67 plant families rely on bats as their major or exclusive pollinators. Not only are these little mammals important for pollinating so many plant species; they can be pretty darn cute too!

The birds and the bees may rule the daytime, but as soon as the sun sets, it is the bats that get to work pollinating. Worldwide, over 500 species of flowers in at least 67 plant families rely on bats as their major or exclusive pollinators. Not only are these little mammals important for pollinating so many plant species; they can be pretty darn cute too! 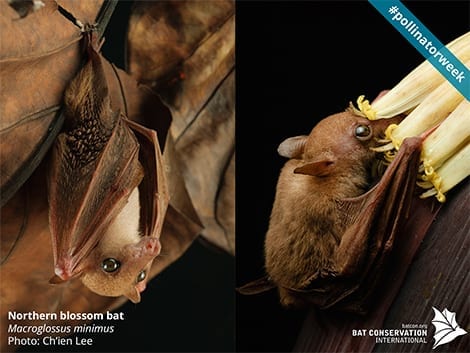 1. Not all bats eat insects!

Eating insects is by far the most common diet found among the 1,450+ species of bats worldwide, which benefits our ecosystems by keeping many insect species in balance. However, many bats also play an important role as plant pollinators.

Bats, like the Northern blossom bat (Macroglossus minimus) from Australia, pollinate the flowers of many plants, including mangrove and banana trees. Scientists believe that many groups of plants have adapted to attract bats, as they are able to carry much larger amounts of pollen in their fur compared to other pollinators. The ability of bats to fly long distances is also another benefit to plants, especially those that occur in low densities or in habitats far apart from each other.

While some of the flowers that attract bats can be quite beautiful, you probably wouldn’t want to receive a bouquet of them. To attract these flying mammals, some flowering plants have evolved a musty or rotten perfume. The smell is created by sulphur-containing compounds, which are uncommon in most floral aromas but have been found in the flowers of many plant species that specialize in bat pollination, specifically in the tropical forests of Central and South America.

As well as their keen sense of smell, bats will also use sight to find nectar-producing flowers. Bat flowers are often white or light-colored in an attempt to stand out against foliage or the night sky, but they also can range from brown and green to pink, fuchsia and yellow. And importantly, many bat-pollinated flowers open only at night.

3. Some bats use echolocation to find flowers

You may have heard of bats using echolocation to hunt insects, but did you know some bats also use it to find flowers? Some plant species have evolved acoustic features in their flowers that make the echo of the bats ultrasonic call more conspicuous to their bat pollinators. These flowers often have a bell-shaped concave form, which effectively reflect the sounds the bats emit enabling the bats to easily find flowers in the dense growth of tropical rainforests. Other plant species have evolved flowers that hang in long stalks away from the plant’s stem, also making it easier for bats to distinguish the flowers via echolocation. 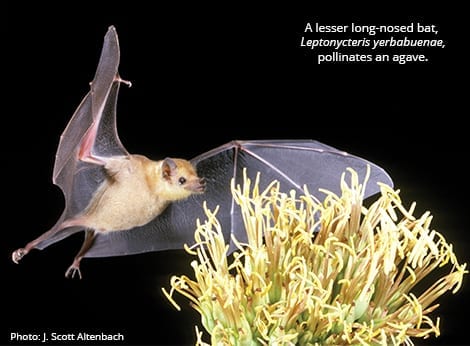 4. Without bats we would have no tequila

Do you enjoy tequila? Then you need to raise your glass to the pollinating bats that helped to bring it to us! Tequila is made from the agave plant, which relies primarily on bats to pollinate its flowers and reproduce. While the bats certainly drink a lot of nectar from the agave plant, you don’t have to worry about them getting drunk! To make tequila, the base or heart of the blue agave plant is steamed and minced before being fermented. This part of the plant is quite removed from the giant flower stalk that the bats come in search of.

5. One species of nectar-feeding bat has the longest mammal tongue in the world

Could you imagine having a tongue that is 9 feet long? That is what it is like for the rare Anoura fistulata, a nectar-feeding bat from South America, which has the longest tongue (proportionally) of all mammals. A. fistulata is only the size of a mouse, but its tongue is around 8.5 centimeters long, making it up to 150% of its body length! With such a long tongue it couldn’t possibly keep all of it in its mouth. Instead, a fistulata’s tongue is anchored in its chest, in a cavity between the heart and sternum (breast bone).

6. Bats pollinate many plants that we use for medicinal, cultural and economic purposes

Did you know that wild bananas are almost exclusively pollinated by bats?  Bats pollinate many ecologically and economically important plants from around the world. The products that we value from these plants are more than just fruits, including fibers and timbers that we use every day. Flying foxes, nectar- and fruit- eating mega bats from Australia, pollinate the dry eucalyptus forests, which provide us with timber and oils that are shipped around the world.

Mexican agave plants, a source of fiber and tequila, are also reliant on the pollination services of several nectar-feeding bats. Many tropical and sub-tropical rainforest ecosystems also rely on bat pollinators to reproduce. Without nectar feeding bats not only would our environment suffer, but our way of living would as well!

Help save Cueva del Diablo, the only known roost for the pollinating species, the Mexican long-nosed bat