Singer James Brown may have once famously sung that it was a mans world, but in conservation, it is anyone's game.

As with all STEM careers, it takes intelligence, passion, creativity, and a fair amount of sweat to advance your chosen field. Bat Conservation International is proud to support the research of three such intrepid scholars with its inaugural Women in Conservation Science Award. This award recognizes female scholars from developing countries who are working on key conservation initiatives.

In the Amazon region of Peru, PhD student Farah Carrasco-Rueda seeks to understand the response of bat species to the expanding agricultural frontier. She and her team will spend several months in the field working to study the local bat species. She plans to use her award to support other women in science, specifically her female field assistants.

As a woman, biologist, and Latin-American, it is a great honor to receive the Women in Conservation Science Award. This recognition incentivizes me to keep working and persevering to advance this beautiful field of study, and increase the efforts to achieve conservation of bats and its appreciation by the people, Farah explains.

Meanwhile, undergraduate student Jazmin Quiroz wants to expand bat conservation in the Andean Tropical Dry forests of her home country of Bolivia. Since corn production is so important to the Bolivian economy, Quiroz hopes her research can highlight the economic benefits of the bats as natural pest control and promote conservation of the native species.

“Most of the studies related to bats as pest control have been conducted in Northern America, and little is known about their impact in South America,” she states in her application.

The Women in Science Recognition Award will be extremely important for me…it will bring attention from media and the scientific community as being a successful Bolivian woman recognized by an important institution such as BCI. Women in science in Bolivia are very few, most of the time they are not [given] the status they deserve. I want to prove them wrong, and show to them that we as women can work in the field, research and others, as hard as any other researcher, and be good at it, she explains.

In Nigeria, awardee Iroro Tanshi echoes this sentiment; when I first started exploring my interest in bat research six years ago, my family members did not fully respect my interest; as far as they were concerned, conservation was not a lucrative career, especially in Africa. Neither is fieldwork for a woman. All that changed after I received grants from BCI for my research and conservation projects.. [This award] will motivate my young female Nigerian mentees that bat conservation is for women.

Now co-chair of the Bat Conservation Africa (BCA) network, Tanshi is studying the habitat association of forest insectivorous bats so that she may establish a conservation plan for the vulnerable short-tailed round leaf bat, Hipposideros curtus. With the Women in Conservation Science Award, Tanshi plans to present her findings to an international community of bat researchers at the 2019 International Bat Research Conference (IBRC) in Thailand.

Supporting the conservation leaders of tomorrow

Since its founding in 1982, Bat Conservation International has awarded hundreds of grants to scholars and conservationist around the world. With its new Women in Conservation Science Award, BCI hopes to empower women to join the next generation of leaders for bat conservation.

This distinction was presented in conjunction with the BCI Student Research Scholarship for Global Bat Conservation Priorities, an award presented to 17 students working in 14 countries on bat conservation initiatives. 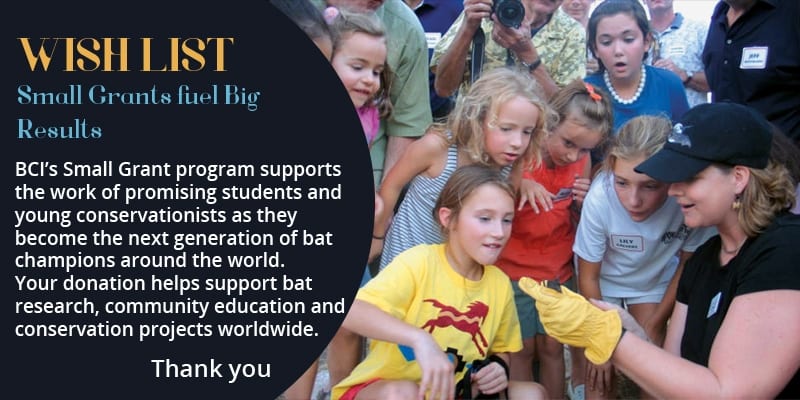