Zuri, a straw–colored flying fox, is one of several bats Merlin Tuttle brought back with him from a 1984 trip to Kenya in East Africa. The others reside in zoos, but Zuri, which means “beautiful” in Swahili, was chosen to be BCI’s first bat ambassador. He has since made countless friends for his cousins in the wild.

Photography has made a big difference in the way people feel about bats, but actually seeing and being able to touch a bat has made even more of an impact on those fortunate enough to have met this gentle animal. Zuri has accompanied Merlin Tuttle across the country and has been a much anticipated treat following lectures. He has also appeared on numerous national television programs and on the front pages of major newspapers and magazines.

Magic happens when Zuri is carefully taken out of his special travel case following a lecture: audiences react with an awed hush and then unbridled delight. Few have ever seen a flying fox before. Everyone, especially children, want to touch his soft silky fur, amazed that he allows hand after hand to pet him.

Zuri’s latest public appearance was with actor Stacy Keach who narrates BCI’s television documentary, “The Secret World of Bats.” Zuri is about to enter a well-earned retirement with friends of his kind, but his contribution to BCI’s early success will not be forgotten by those who met this special animal. A new bat ambassador is currently in training. 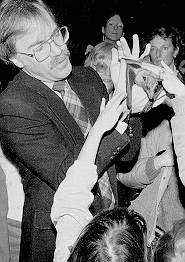 After a lecture and slide program, Merlin Tuttle introduces Zuri the flying fox. Meeting this gentle animal has changed the way many people feel about bats.