Latest on Bats & COVID-19
Home News Bats Magazine Volume 13, Issue 1 Why Do Bats Use This Bridge But Not That One?

BAT RESEARCHERS have long known that bats use bridges for day roosts, night roosts, migratory stopovers, or occasionally as nursery roosts. The question BCI’s Bats and Bridges Project is trying to answer is if bats randomly choose bridges for roosting sites, or if they choose specific bridges based on specific characteristics [BATS, Winter 1994]. We are well on our way toward finding the answer. Some of the overall characteristics we are looking at include bridge location, surrounding land use, availability of water, and bridge temperatures, while details involve the depth, width, and length of roost crevices within each bridge surveyed.

Once all of these data are analyzed, we hope to have a master model that ultimately could enable us to predict where special bat friendly bridges would be most beneficial to both bats and humans. Such a model has the potential to be extremely useful to state and federal agencies that are already interested in providing artificial bat habitats, and the concept is sparking some international interest as well. Agricultural application is an especially exciting possibility. As an example, Austin’s Congress Avenue Bridge is providing a home to an estimated 1.5 million self-perpetuating, insect-eating machines. Imagine the value to the crops of an organic farmer if this bridge were nearby. At no extra cost to taxpayers, such bridges could prove very helpful in solving agricultural pest problems. The study is already attracting wide attention from conservationists and other researchers.

Future efforts will also focus on gathering information on total numbers of bats using bridges within the primary study area in Central Texas and later estimating the numbers of bats using bridges over wider areas. Experimentation has been initiated with the Texas Department of Transportation in retrofitting some existing bridges with a specially designed device called the Texas Bat-Abode, an experimental roost crevice that can be used at reasonable cost to expand or add bat roosts in existing bridges. The first test results should be in by the end of this summer.

BCI greatly appreciates the help of the Texas Department of Transportation, the Winslow Foundation, the Margaret Cullinan Wray Charitable Trust, and the National Fish and Wildlife Foundation in providing the funds to accomplish this multi-year project.

You Can Help Us

WE WELCOME INPUT from our readers on other locations where bats are roosting in bridges. This information is being compiled as general reference by country, state, and county or parish. The following list identifies the kind of information we need— please be as specific as possible. Return the information to Brian Keeley, Bats and Bridges Project Coordinator, BCI, P.O. Box 162603, Austin, Texas 78716, or phone 512-327-9721. 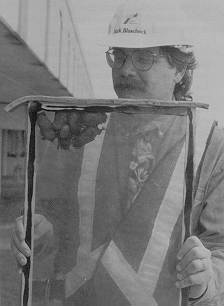 Mark Bloschock, a supervising bridge design engineer with the Texas Department of Transportation, displays an experimental device used in estimating the numbers and density of roosting bats within a bridge crevice. He has just removed the device from a crevice to check for bats. Note the bats clustering in the upper left corner. The Department’s active participation in this multi-year project has been invaluable.