Mexican free-tailed bats (Tadarida brasiliensis) form the world's largest, most dense aggregations of mammals. Roosting at average densities of approximately 1800 adults per square meter, they sometimes cover thousands of square meters of surface within immense caves. Densities of newborn pups, which roost apart from their mothers except when nursing, can be in excess of 5000 per square meter. The Bracken Cave maternity colony in central Texas contains approximately 20 million individuals, making it the world's largest known bat colony. Bats from just this one cave consume an estimated quarter of a million pounds of insects nightly. There are at least a dozen other known colonies of Mexican free-tailed bats in Texas, Oklahoma, Arizona, and New Mexico, each with populations exceeding a million individuals.

Mexican free-tailed bats are migratory, and in the southwestern United States are present from April through September. Bat pups are born in mid-June and nurse for about five weeks. In autumn, both adults and juveniles migrate south and overwinter in caves, buildings, and other roost sites scattered throughout much of Mexico. Maternity colonies in the southwestern U.S. are estimated to contain a combined total of 120-150 million individuals, and a few large colonies also are known to exist in northern Mexico.

While Mexican free-tailed bats clearly are not the world's most common mammal (humans, or perhaps, house mice probably hold that distinction), it is apparent that they are nonetheless very numerous. Despite this, there is cause for concern; throughout their range there are no more than a few dozen caves which are used to raise young, and the destruction of even one large colony (such as Bracken Cave) would have substantial impact on the total species population. Even in the best of circumstances, recovery from a catastrophic event would be very slow due to their low reproductive rate. An average female lives about 12 years, producing one offspring per year.1

Colonies in several of these caves have declined dramatically in recent historic times. Carlsbad Cavern, New Mexico, is reputed to have housed 8.7 million free-tails in the 1930's, but for the past 15 years its population has been more or less stable at about 500,000. Current annual estimates range between 213,000 and 1 million. While the decline at Carlsbad may be the most widely known, the population reduction at Eagle Creek Cave, Arizona, is the most dramatic. In 1963 free-tailed bats were estimated to exceed 25 million individuals, but in a six year period this population crashed to an estimated 30,000 bats, a nearly 99.9% reduction .2

Other less well documented declines also have occurred. The U-Bar Cave in southwestern New Mexico once was the site of a large guano mining operation, and as recently as the late 1970's housed a large maternity colony. I visited this cave early in July 1985, a time when mothers should be nursing their young, and found no bats.

These declines appear to be mirrored by similar population reductions of free-tailed bats in Mexico. With the help of American and Mexican colleagues, Dr. A. Thomas Vawter, Ignacio Cupio Ortiz and I assembled a list of known roosts in Mexico which we visited in January and February 1986. Although all of these sites were known to have contained large resident populations within the last two decades, five of the nine sites we located were no longer occupied.

What causes these declines? Certainly the aggregative roosting habits of free-tailed and other bat species may make them susceptible to epidemic disease. Nevertheless, while disease may be responsible for fluctuations in population size, it is unlikely to lead to species-wide decline. Such decline suggests the introduction of new stresses.

Pesticides and Bats
A new stress commonly implicated in the decline of free-tailed bats is the use of organochlorine pesticides, specifically DDT and dieldrin. Contrary to earlier reports, recent studies have shown bats to be physiologically no more sensitive to these pesticides than are other mammals.3 However, the insectivorous diets of many bats can lead to their acquiring substantial pesticide 'loads". Organochlorine pesticides persist in the environment and remain toxic for decades. Fat-soluble, they accumulate in stored body fat. When this fat is metabolized during times of stress (such as migration), pesticide concentrations can reach lethal levels, particularly in the brain (an especially sensitive tissue, and among the last from which fat is metabolized). In addition, organochlorine pesticides are passed in milk from mother to offspring so that young may have substantial pesticide residue in the fat they must utilize during the physiologically demanding period of weaning. Exacerbating this further, weaning of young free-tailed bats is closely followed by their first migration.

The potential for organochlorine pesticides to decimate bat populations clearly exists, and there is little question that these pesticides have impacted negatively on populations of free-tailed and other bat species as well (including the endangered Myotis grisescens). Working in Carlsbad Cavern, Drs. Ken Geluso, Scott Altenbach and Don Willson have documented that young freetailed bats can have pesticide residues that are potentially lethal when their body fat is metabolized during migration,4 and it seems likely that pesticides have had negative effects on the Carlsbad colony.

Although existing data do not support the supposition, the dramatic decline of the Eagle Creek Cave population also has been attributed directly to organochlorine pesticide poisoning.' Independent studies by Geluso, Altenbach, and Wilson,5 and by Drs. Don Clark, Jr., Chester Martin, and Douglas Swineford 6 have shown that while organochlorine pesticide loads in freetailed bats from Carlsbad were high and potentially lethal, residues of these pesticides in bats from Eagle Creek Cave were much lower, and in fact no higher than those in bats from Bracken Cave, Texas. DDE concentrations (the principal metabolite of DDT) in guano taken from Bracken Cave were, if anything, higher than from Eagle Creek Cave. Although it is possible that the Eagle Creek Cave population decline resulted from poisoning by other toxins,7 there is apparently no evidence that bats from Eagle Creek Cave were more exposed to organochlorine pesticides than were bats from the currently thriving Bracken Cave colony. Ken Geluso and his colleagues suggest that the exceptionally high pesticide loads in bats from Carlsbad may be a result of local contamination obtained in New Mexico.5 Additional information collected by Don Clark, Alexander Krynitsky, and Donald White supports this suggestion.8

Human Disturbance
While the impact of pesticide poisoning on free-tails and other bats should not be underestimated, it seems certain that this is not the only, and probably not the major, stress responsible for the decline of free-tailed bat populations. In a recent review of the effects of environmental contaminants on bat populations, Don Clark states: "it is doubtful that the combined adverse effects of all the various chemical and metal pollutants have been as serious as the total impact of disturbance, vandalism, and habitat destruction.", My experience leads me to concur with this statement.

We do not have evidence for any specific event responsible for the decline of the Eagle Creek Cave bat population, and perhaps there was none. The cave, however, is accessible to anyone with a four-wheel drive vehicle, horse, or the energy to walk four miles. The cave entrance and trail leading to it are conspicuous, as are the numerous gun shell casings in and near its entrance.

The decline of the Carlsbad population is thought due, at least in part, to the boring of a shaft through the ceiling of the main free-tailed bat roosting area to facilitate guano mining, altering the temperature, humidity, and airflow patterns within the roost.

The U-Bar Cave has electric light cord strung throughout, is littered with the debris of human activity, and is the site of archeological digging. Of the five caves in Mexico which no longer housed bats when we visited them, two have been commercialized for tourism, one was burned within the last two years by phosphate miners, and one is no longer in existence, having been dynamited five or six years ago.

The Future
As in so many other cases, it seems evident that much of the decline in free-tailed bat populations is directly due to human disturbance and roost site destruction. There are bright spots, however. The shaft bored in the dome of the Carlsbad Cavern roost chamber recently has been plugged, and free-tails have begun to reoccupy this area (although the number of bats present has not yet increased). While Eagle Creek Cave housed few, if any, mothers and nursing pups in the summer of 1985, Ronnie Sidner, a BCI member from the University of Arizona at Tucson, reports that a substantial maternity colony was present there in the summer of 1986. Eagle Creek Cave needs protection from human intrusions, and Sidner is currently involved in a management study directed toward achieving this.

It also is important to preserve those colonies which still thrive. The apparent good condition of several large roosts is clearly due in no small part to the fact that access to them is restricted by land owners who appreciate the unique resource with which they are entrusted. Current initiatives by Bat Conservation International, The Nature Conservancy, and the Marbach family to ensure continued protection of the site of the largest known roost in Bracken Cave are to be applauded.

(Gary F. McCracken is an Associate Professor in the Department of Zoology and the Graduate Programs in Ecology and Ethology at the University of Tennessee, Knoxville. He received his Ph.D. from Cornell University and postdoctoral training at the University of California, San Diego and University of Rochester. For the past 10 years his research interests have included population genetic structure and social behavior in bats. Since 1981, he has studied nursing behavior and genetic structure in maternity colonies of Mexican free-tailed bats.) 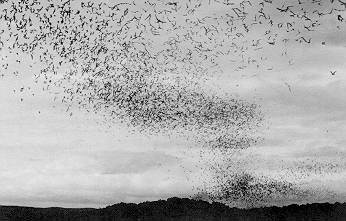 Sights such as this dusk emergence of Mexican free-tailed bats are now rare and disappearing rapidly. Photo by Merlin Tuttle. 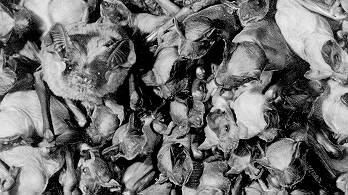 Dr. McCracken recently discovered that mother free-tailed bats remember exactly where they leave their babies and recognize their own by their unique vocalizations and scent.
Photo by Dr. Merlin Tuttle.