All photographs by Merlin D. Tuttle

This is the the final article in our three-part series on places where bats roost. Thus far, we have covered bats that live in foliage and tree cavities, as well as those that take advantage of shelters inadvertently provided by other animals. Though such homes accommodate a majority of bat species worldwide, by far the largest bat colonies live in caves, and many also rely on cliff-face crevices and other rock and erosion cavities.

Despite the spectacularly large colonies that occupy a few well-known caves, the vast majority of caves are not suitable for bat use, nor are most crevices and cavities in cliffs, rocks, and eroded banks. Sometimes only one in hundreds or thousands of seemingly available roosts actually meets minimum requirements (i.e., is located near enough to food or water, provides required temperatures, and is safe from predators). Furthermore, even ideal roosts often can be used only for one season each year. 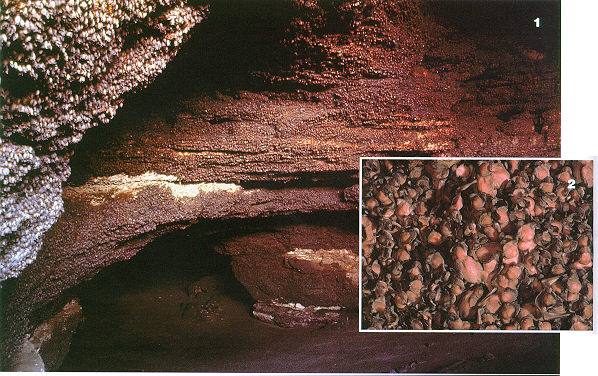 Bracken Cave in Central Texas, for example, shelters the world’s largest bat colony, some 20 million Mexican free-tailed bats (Tadarida brasiliensis), and it is critically important as a nursery site for the species (1-2). Nevertheless, even these bats must migrate up to 1,000 miles or more south into Mexico to find warm caves and food in winter, and most males do not use Bracken Cave at all except during migration. 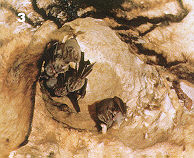 The combined body mass of bats in Bracken Cave amounts to an astonishing 270 tons. By sharing their body heat, the bats are able to raise the cave’s temperature by over 20 degrees. In any nursery roost, warmth is essential to growth and survival of young, but only species that congregate in very large numbers can so dramatically heat an entire cave. Most bats live in smaller colonies, and these must find nursery roosts that are already exceptionally warm, mostly between 80 and 90°F. This precludes most temperate-zone species from rearing young in caves. However, in especially warm climates, even a few bats often can rear young by selecting small heat-trapping cavities in ceilings. In this Caribbean cave (3), small colonies of Jamaican fruit bats (Artibeus jamaicensis) rear young in cavities that are carefully guarded as valued commodities by harem males. Since few roosts are ideally warm, clustering and trapping of body heat is important for many bats, in part explaining their tendency to form large colonies. 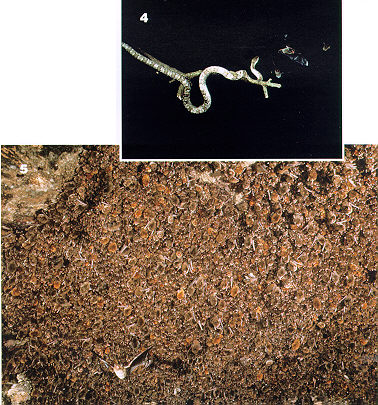 In lowland tropical and subtropical areas, where most caves are relatively warm, and food and water are often nearby, bats can use nearly any cave that is safe from predators. But even here, cave entrances must be large enough for bats to enter and exit quickly to avoid snakes, carnivorous mammals, and birds of prey. In Florida, up to 17 rat snakes at a time have been seen waiting for bats to emerge from a single cave entrance (4). This is an unnatural situation created because many southeastern myotis (Myotis austroriparious) roosting caves have been destroyed by careless human development and disturbance, forcing ever larger numbers to congregate in fewer and more vulnerable caves. In one incident, a quarter of a million of these bats (5) took refuge in a single wet cave where they later drowned in a flood. Such unnatural crowding increasingly threatens bats worldwide. 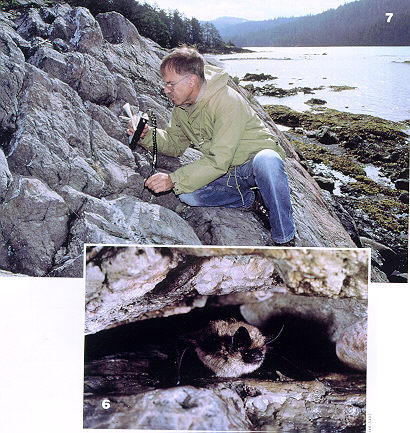 In temperate zones of the United States and Europe, especially at higher latitudes and elevations, only a few species can use caves, or even rock or erosion crevices, for rearing young. These sites are simply too cold. However, extremely rare exceptions can be found, even in northwestern Canada. Here, on a remote island, Keen’s myotis (Myotis keenii) (6) are able to rear young in rock crevices that are geothermally heated by hot spring water (7). They remain safe despite being at ground level because there are no predators. 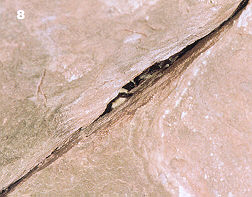 Especially in desert areas, bats often must find rock or erosion crevices that receive just the right amount of heat from the sun. By being very clever in their selection, tiny western pipistrelles (Pipistrellus hesperus) can use cliff-face crevices year-round (8). They look for warm (but not extremely hot) crevices to rear young in summer, and cool (but not sub-freezing) ones for winter hibernation. These tiny bats wedge into spaces only a half-inch or less wide, enabling them to press tightly to the rock surface for temperature control and move deeper to avoid extremes. Also, in such tight spaces, they can prevent attacks from hungry snakes by simply opening their mouths to fill the space so completely that the snake has no room to manuever.

Species that form larger colonies in more spacious cliff cavities attract the most attention, so they must be especially careful to avoid roosts that are accessible to climbing predators. For this reason, sometimes only one in tens of thousands of seemingly available spaces can be occupied. 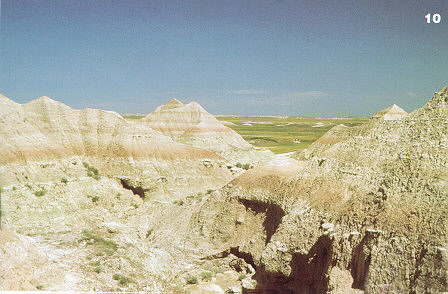 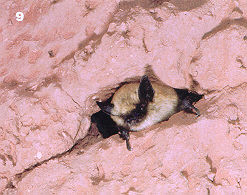 The western small-footed myotis (Myotis ciliolabrum) relies on an opposite strategy (9). Individual mothers often rear their young alone, in ground-level cavities that are easily accessible to predators; however, because they occupy only one in many thousands of openings in extremely rocky or eroded landscapes (10), it is not worth a predator’s effort to hunt them.

Most temperate-zone bats are forced to migrate or hibernate to avoid winter weather extremes. Some, such as the western pipistrelle, survive winter by moving deep into cliff-face rock crevices where temperatures are low, but above freezing. However, prior to the advent of modern humans, caves were by far the safest havens for consistently finding such conditions, and many bats are now so well adapted to hibernating in specific temperature zones of caves that they cannot change.

Bats living in temperate climates typically spend the summer in tree cavities, man-made structures, or rock crevices that are sufficiently solar-heated to permit rearing of young. However, in fall they must travel varying distances to reach the relatively rare caves that are capable of providing cool, stable temperatures (between 32 and 52°F) for hibernation. Since long migrations can consume as much energy as is required for an entire winter of hibernation, bats can afford lengthy travel only where hibernation caves are ideal.

Bats have developed a variety of winter survival strategies in response to the temperature gradients found in hibernation caves. The cave diagram on page 10 provides a simplified illustration of how three bat species, through differring physiological and behavioral adaptations, have divided roosting habitat in a manner that minimizes competition. 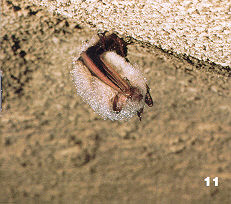 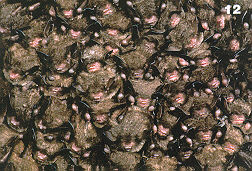 Eastern pipistrelles (Pipistrellus subflavus) (11) cannot survive below-freezing temperatures. Thus they must enter hibernation early and leave late, often remaining torpid except for brief arousals, from mid-September to early May. Indiana myotis (Myotis sodalis) (12, on page 11) have an intermediate tolerance. They hibernate from late October through March, while big brown bats (Epetesicus fuscus), which are extremely hardy and even arrive during severe snowstorms, typically hibernate only from December through February.

In order to survive until spring, hibernating bats must store large amounts of fat and lower their body temperatures as much as possible to reduce metabolic rates and consequent weight loss.

Since bats spend close to 80 percent of their winter fat supply on necessary arousals to compensate for dehydration and changing temperature, it is important that exposure to the coldest, dryest air be minimized. Because big brown bats roost near cave entrances, where incoming air is exceptionally cold and dry, they often reduce their exposure by wedging into tight crevices. Even so, rapid changes in temperature and humidity force them to arouse and move more often than other species, and this is especially costly. By spending less time in hibernation, they are able to occupy costly roosts and use a wider variety of hibernation sites, enabling them to avoid the expense of long migration.

Indiana myotis limit surface exposure, and thus energy-wasting arousals, by packing into dense clusters. This also saves energy by allowing them to share body heat when waking up. In contrast, eastern pipistrelles roost singly in relatively stable, inner areas where temperature fluctuations actually cause moisture to condense on their fur. Because they roost in the most stable, moist areas, pipistrelles undergo fewer forced arousals and apparently save sufficient energy to more than compensate for their higher daily metabolic costs. By tolerating warmer hibernation roosts, the opposite of what big brown bats do, they too are able to roost in a wider variety of caves and avoid long migrations.

Prior to the arrival of European settlers in America, the Indiana bat’s intermediate hibernation strategy had become extremely successful. By forming large, tightly packed clusters in just a few ideally structured caves, where it occupied a relatively narrow middle range of temperature, this species apparently had minimized hibernation costs sufficiently to permit long migrations. It could build enormous colonies–an estimated 10 million or more in Mammoth Cave, Kentucky, alone–but could not survive in the much wider variety of caves tolerated by big brown bats and eastern pipistrelles.

Unfortunately, the very strategy that enabled this species to dominate eastern North America for thousands of years has today played an important role in its dramatic decline to endangered status. The kinds of exceptionally large, complex, and multi-entranced caves that Indiana bats require are also those most sought after for human recreation. Though many such caves are now commercialized, hope does exist. Increasingly, cave explorers, mining corporations, and some commercial cave owners are cooperating with BCI and with government agencies, private industry, and other wildlife organizations to identify and protect suitable hibernation sites where bat populations still can be restored. 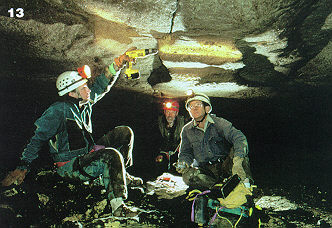 Last spring, the U.S. Forest Service and BCI spearheaded a partnership effort to protect Rocky Hollow Cave in Virginia, an ideal hibernation roost that, prior to intense vandalism, sheltered at least a million or more Indiana bats [BATS, Fall 1999]. Such projects are already beginning to pay off. The enormous Unamin Graphite Mine in southern Illinois was set aside as a bat sanctuary in 1996, thanks to Unamin’s timely collaboration with BCI and the U.S. Forest Service. Today it provides ideal habitat for a rapidly growing population of more than 9,000 Indiana myotis and thousands of other bats. BCI is also leading a collaborative study to better document hibernation requirements (13), and this, too, is helping. Already the investigation has led to airflow restoration projects at several critically important caves where Indiana myotis were declining. Much remains to be done, however. Knowledge of the specific roosting needs is lacking for most bats worldwide, though it is essential to their conservation.

Merlin D. Tuttle is Founder and Executive Director of BCI. 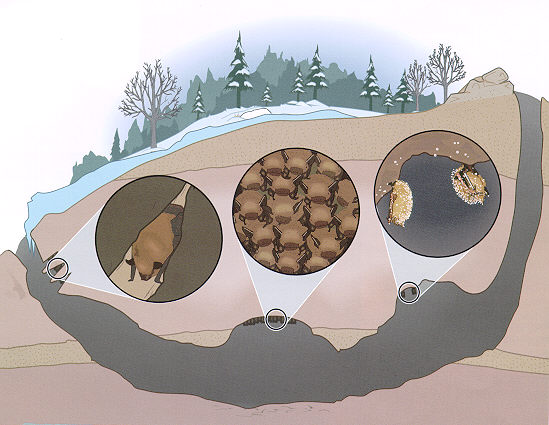 Caves such as this one, that provide large volume areas below their lowest entrances, are able to trap cold air. Because subterranean rock temperatures approximate average above-ground temperatures, if summer highs were to reach 80°F and winter lows fell to 30°, the limestone rock would appoximate 55°, the midpoint between these extremes. Thus a cave that occured in that limestone would approximate this temperature, provided it had no airflow from outside. If it had two entrances located at different levels, however, there would be a “chimney effect” airflow through the cave. Relatively warmer, lighter air would rise from the upper entrance while cold air flowed into the lower entrance. In a large enough cave, this would create a gradient of temperature ranging from below freezing, where outside air enters, to 55°, where it exits. By selecting different temperature zones along the gradient, multiple species can more easily share a cave.

Cold-air-trapping caves, such as the one pictured, provide temperatures that can be 10° below the annual average at the surface. This variance means that bats arriving as early as September can enter hibernation at an ideal 45°, though outside temperatures may still be close to 75°. By entering hibernation at this time, bats can avoid the danger of sudden fall storms. If this cave’s contours were reversed, it would trap warm summer air, providing potential nursery roost sites, though it would be unsuitable for hibernation.