Latest on Bats & COVID-19
Home News Bats Magazine Volume 16, Issue 4 What if You Went to School with Bats?

Some enterprising students and teachers take on an unusual class project to save the animals that share their school . . .

Teaching math, writing, or history to a classroom of easily distracted kids is hard enough without flying animals suddenly dropping from the ceiling and causing chaos. Yet that was the situation teachers at Canadian Middle School in Canadian, Texas, used to face for much of the school year. For decades an estimated 30,000 Mexican free tailed bats (Tadarida brasiliensis) spent spring, summer, and early fall in the school’s attic, and though they usually kept to the safety of their roost, they had been known to choose some inopportune times to venture into the hallways and classrooms.

In 1997, school administrators declared they’d had enough. It was time for the bats to go–but where? Many students had become quite fond of their flying classmates and didn’t want them evicted without a replacement home. So last year students and teachers came up with a creative solution: build a better home elsewhere, and perhaps the bats would move.

The students began by visiting BCI’s web site to research the needs of bats. With the guidance of science teacher Kathie Jackson, the school applied for and received a $750 Environmental Challenge Grant from the Texas General Land Office and the H-E-B Grocery Company to build and install bat houses as alternative roosts for their attic dwellers.

After consulting BCI biologist Brian Keeley and the Texas Department of Transportation (TxDOT), the group chose a nearby bridge over the Canadian River as the site for the houses. Keeley suggested they use a type of large-capacity bat house specifically designed for placement under a bridge–the "Texas Bat-Abode"[BATS, Fall 1997]. Situated over the water and under the bridge, the bats’ new home would be sheltered from both weather and vandals.

Once plans were made to construct three bat-abodes–each of which could house up to 20,000 bats–everyone got involved. Wood shop classes built the houses using wood from old highway signs; science classes painted them and assisted TxDOT with installation. Even English classes joined in by participating in an essay contest about the benefits of having bats in one’s neighborhood. Finally, after the bats had migrated to Mexico for the winter, Tim Hanks, a longtime BCI member and owner of Commercial Bat Control in San Antonio, visited the school and sealed the animals’ entry points into the buildings.

When spring came, students and teachers alike were eagerly awaiting the return migration of the bats, anxious to see if they would take up residence in their new homes. Kathie Jackson was pleased to report that the former schoolhouse bats accepted their new "abodes"and were seen flying out over the river at dusk.

She and other faculty and students will be waiting in spring 1999 to observe the free-tails’ return. Although the bats are no longer interrupting classes, they’re still very much a part of the education at Canadian Middle School.

Mexican free-tailed bats sometimes survive the loss of natural roosts by moving into crevices under bridges. Bat-abodes, developed by BCI, can greatly expand such habitat. Thus, when 30,000 free-tails were evicted from the Canadian Middle School in northern Texas, students got a grant and worked with the Texas Department of Transportation to build and install enough bat-abodes to shelter them. 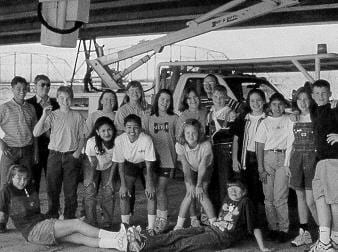