Bat populations in the Federal Republic of Germany have declined rapidly over the last three decades. In many places up to 90% appear to have been lost in only 15 years. All 22 species are now officially listed as endangered, and five are nearly extinct. The Greater Horseshoe Bat (Rhinolophus ferrumequinum) and the Lesser Horseshoe Bat (Rhinolophus hipposideros), for example, are practically extinct in southern Germany where they were among the most common species for the first half of this century.

There are several important causes of bat decline. Laws governing bat protection were enacted in 1936, but were inadequately enforced. The nocturnal activity of bats has led to misunderstanding and a generally bad public image. Only a few days ago I found 15 bats dead in a church where the sacristan had trapped them to starve instead of excluding them. He didn't like their droppings in the attic.

Bats' hibernating caves are disturbed by tourists, while alternate hibernating sites, such as old mines, are closed for safety reasons. Those that breed or hibernate in tree cavities have rapidly lost their roosts due to intensive forestry. Those living in attics are excluded during renovations or are poisoned through inadvertent contact with wood preservatives.

Another problem involves changing land use. Fields are expanding while trees and ponds disappear. Pesticides are especially dangerous, both depriving bats of food and poisoning
them. In bats examined for chlorinated hydrocarbons, the concentration of DDE and PCB was found to be more than 10 times higher than in mice or shrews.

The importance of bats in biological pest control is rarely appreciated. just one colony of 800 Large Mouse-eared Bats (Myotis myotis) eats approximately 55,000 insects nightly. Nearly 200 years ago bat scientists noted the usefulness of bats, but protection of bats is only now becoming popular.

In the Federal Republic of Germany leaflets and posters are being printed to inform the public about the urgency of bat conservation. In several districts local governments are supporting bat surveys. As colonies are found in attics, home owners are being educated regarding roof preservatives that do not harm bats. Cellars and caves where bats hibernate are being protected with iron bars. Several designs of bat boxes are helping bat species that live in tree hollows.
All this conservation work protects bats only in their roosts. We must now protect the habitats where bats feed. Natural landscapes as well as roosts must be preserved, and pesticides must be reduced. This and public education are our most important tasks of the future.

(Frieder Mayer leads a bat protection group in Franken, a district of southern Germany. He is a student majoring in biology and chemistry at Hamburg University.) 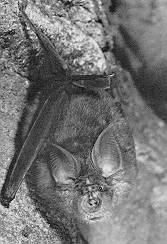