More and more national forests are managing their resources to provide protected habitat for bats. . .

From the scenic vista high atop windswept Rich Mountain in the Ouachita National Forest of western Arkansas, forest visitors pause to survey the diverse landscape before them. Miles away, nature’s mural of fields, forests, rivers, and mountains meet the horizon. Perhaps having glimpsed a fleeting white-tailed deer or lumbering black bear, visitors often speculate on the incredible variety of creatures inhabiting these beautiful and rugged lands.

The National Forest System is composed of 156 national forests, 19 national grasslands, and 71 experimental forests. They are among the most important public lands in the United States. From subarctic Alaska to tropical Puerto Rico, they total some 297,000 square miles, more than twice the area of all our national parks combined, and 10% more than the area of Texas.

National forests offer tremendous diversity of habitats for bats, not only from forest to forest, but within individual forests as well. From the montane spruce-fir community in the Sawtooth National Forest in Idaho, to the Sonoran Desert of Arizona’s Tonto National Forest; from the pine and hardwood uplands of the Ouachita and Ozark National Forests of Arkansas, to the subtropical hardwood-palm communities of Florida’s Ocala National Forest; these lands all provide vital habitat for bats.

Some of the United States’ most important bat caves occur on national forest lands. The Monongahela National Forest in West Virginia includes five caves that contain the endangered Indiana bat (Myotis sodalis) and Virginia big-eared bat (Plecotus townsendii virginianus) and the rare small-footed bat (Myotis leibii). Four of these caves have been determined to be essential to the bats’ recovery and have been designated as critical habitat. Gates to protect the caves from undue human disturbance have been installed.

In cooperation with endangered species biologists from the West Virginia Department of Natural Resources, Forest Service biologists use night-vision scopes to survey and monitor three maternity caves where Virginia big-eared bats rear their young each summer. Every second winter, they visit hibernation sites for Indiana and Virginia big-eared bats to conduct winter censuses. In addition, these two agencies have established a project using light tagging and radio telemetry to learn more about the foraging behavior and habitat needs of the Virginia big-eared bat.

In the Ozark National Forest in northern Arkansas, 13 caves are home to endangered bats during some time of the year. Each cave has an interpretive sign explaining the cave’s significance and information about the bats that use it. Perhaps most important is Bonanza Cave, which houses the largest known hibernating colony of gray bats (Myotis grisescens) west of the Mississippi River. Numbering 250,000 individuals, or about 15% of the total known gray bat population, it is one of only eight remaining hibernacula for the species. Since a gate designed to limit human visits to the cave was installed, the overwintering population has remained stable. Because of the cave’s sensitivity and importance, adjacent private lands have been purchased, and additional acquisitions are planned to protect this important site from disturbance and development. In addition to monitoring endangered bat populations, forest surveys conducted in cooperation with biologists of the Arkansas Game and Fish Commission continue the effort to locate additional caves of importance to bats.

In areas where local geology precludes cave formation, artificial structures can provide roosting habitat for cave-dwelling bats. Abandoned mines, railroad tunnels, and quarries are increasingly recognized as important in providing roosting sites for bats. In the Ouachita National Forest, gold and silver mines, excavated and abandoned over a century ago, were a bonanza in providing winter hibernation sites. Protective gates have been installed at the entrances to seven of these, and the results have been encouraging. Before gating, one mine near a popular recreation site contained only two eastern pipistrelles (Pipistrellus subflavus) during several winter visits. Repeated disturbances by curious people were undoubtedly the reason for so few bats. Two years after gating, 72 bats representing three species were observed during winter surveys. Included among these was the southeastern bat (Myotis austroriparius), which is considered sensitive by the U.S. Fish and Wildlife Service.

During the last decade Bat Conservation International has generated greater interest in bats, their habitat needs, and their roles in the health of forest and other ecosystems. As a result, cooperative studies designed to answer basic natural history questions about bats have rapidly increased along with protective actions. Because the Forest Service has management responsibility for habitats extremely important to bats, Forest Service managers and scientists hold the key to recovery for some bat species. Forest service success depends upon collaboration with federal and state agencies, particularly natural resource and wildlife agencies, as well as private organizations and individuals, all of whom are stakeholders and partners in these efforts.

In Illinois, Natural History Survey bat biologists, working with the Shawnee National Forest and other state and federal agencies, have conducted an extensive investigation of summer roost selection and roosting behavior of the Indiana bat, one of the United States’ most endangered species. Using radiotelemetry, biologists tracked bats to preferred habitat sites. There they collected data on roosts and microclimate, evaluated habitat, and conducted population censuses. These data provide resource managers with important information needed to make management decisions in areas where Indiana bats occur.
Near Tucson, Arizona, the Coronado National Forest has been investigating how federally endangered lesser long-nosed bats (Leptonycteris curasoae) react to a gate at an important stopover cave in need of protection. The gating project was completed by the U.S. Fish and Wildlife Service in cooperation with the Escabrosa Grotto, a local chapter of the National Speleological Society. Over 700 hours of volunteer time donated by grotto members and other cavers went into this project and into protecting other Arizona national forest caves.

The volunteers also cleared the entrance to another cave where guano deposits indicated significant past use. It is now hoped that bats may again use it. Recognizing the importance and fragility of cave ecosystems and their inhabitants, the Coronado National Forest recently hired a full-time cave specialist to lead education efforts and to gain public involvement in habitat protection.

Information gleaned from these kinds of efforts, and information provided from professional and lay persons interested in the welfare of bats, has resulted in habitat considerations beneficial to bats. Bat habitat needs now have been incorporated into many Forest Land and Resource Management Plans–the guiding document for all natural resource management activities within each forest.

For example, in the Ouachita National Forest these habitat considerations include retaining existing snags (standing dead trees) and creating large diameter snags by girdling some living trees where suitable snags are in short supply. Den trees (hollow living trees), typically more scarce and unevenly distributed, are protected and retained. These snags and den trees provide key structural components of the forest profile and enhance forest habitat diversity. Ponds are excavated at densities of four or more per square mile to provide permanent sources of water. And riparian areas, which support high diversity of wildlife and are essential as buffer strips for stream systems, are designated and managed as key wildlife areas.

Efforts to educate the public about bats and their habitat needs are equally important, and educational materials produced by BCI have been a key element in developing interpretive programs. As part of a “Watchable Wildlife” program, southern California’s San Bernardino National Forest is developing an interpretive campground display to call attention to the importance of snags and artificial roost boxes to bats. Bat detectors will be used during nighttime nature walks to “tune in” and give forest visitors insight into the bats’ busy schedule above their tents and campers.

Also in California, the Eldorado National Forest incorporates opportunities for bat education into their “Animal Inn” program, pointing out the importance of snags to bats. One of the Forest Service’s outstanding interpretive facilities is Blanchard Springs Caverns in the Ozark National Forest. Here visitors learn firsthand about the relation of bats to caves and cave ecology.

The opportunity for public education concerning bats abounds in all national forests. National forests host twice as many visitors as the National Park system, and virtually all residents of the lower 48 states live within 300 miles of one or more national forests or grasslands. Interpretive exhibits offer forest managers excellent opportunities to showcase bat conservation efforts on national forest lands while informing the public of the beneficial aspects of the bats themselves.

While these examples of cooperative research, conservation, and education are encouraging, a much greater emphasis needs to be placed on understanding the roles bats play in forest ecosystems. To date, most bat research has targeted the immediate needs of threatened or endangered bats or has involved habitat conservation and protection work in areas of karst topography, or limestone regions, where cave systems are home to some of our most sensitive species. However, a great majority of national forest lands are not located in karst regions. These forested lands support an assortment of species typically referred to as “tree bats.” What do we really know about them and are we ensuring their survival with current management guidelines and practices? Are we retaining components of habitat vital to them, yet currently unknown to us?

Unfortunately, even basic survey information regarding occurrence and distribution of bats is, in many areas, lacking. These and many other questions regarding bats and their biology need rigorous investigation. Considering the ecological importance of bats’ consumption of insects, and the devastating effects some insect pests can have on timber resources, bats should be placed high on the list of wildlife species deserving our immediate attention.

One hundred years ago President Benjamin Harrison marked the beginning of the National Forest System by setting aside lands that are the physical embodiment of an important idea: conservation. As we celebrate the centennial of this historic event this year, the words of Aldo Leopold ring truer today than ever before: “The last word in ignorance is the man who says of an animal or plant: ‘what good is it?’ If the land mechanism as a whole is good, then every part is good, whether we understand it or not. If the biota, in the course of eons, has built something we like but do not understand, then who but a fool would discard seemingly useless parts? To keep every cog and wheel is the first precaution of intelligent tinkering.”

Through the combined efforts of the Forest Service, conservation organizations, and private citizens, we hope that national forests will always be a haven for these remarkable mammals.

[bio]
BCI member David A. Saugey has been a wildlife biologist with the U.S. Forest Service, Ouachita National Forest, for 13 years. He received the 1990 Arkansas Wildlife Federation’s Conservation Educator of the Year Award for his work with schools and other groups, particularly in the areas of bat and salamander conservation. 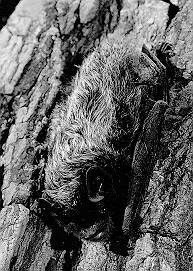 Silver-haired bats often roost during the day camouflaged behind a piece of loose bark or in a dark crevice. Snags, or dead trees, also provide roosts and are important elements in maintaining healthy forest habitats. 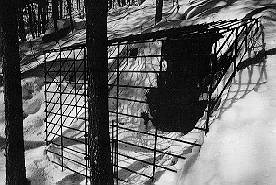 National forests provide diverse habitat for both cave- and tree-roosting bats. With their numerous caves and mines, many forests contain significant bat habitat. Two years after gating this mine near a popular recreation site in the Ouachita National Forest, the bat population increased from two bats to nearly 100. The population likely will continue to grow. 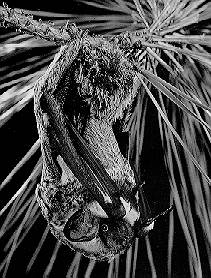 Forests are essential habitat to hoary bats who rely on them for roosts. Summer days are spent well-concealed in the leafy foliage of trees.