Increased ecotourism at Madagascar’s Ankarana Reserve is a mixed blessing for bat conservation . . .

With only a slightly bumpy few-hours drive out of Antsiranana on the northwestern end of Madagascar, you will find the Reserve Speciale d’Ankarana.* Ankarana is among the most famous and accessible of this country’s nature reserves, and it shelters one of the Great Red Island’s many natural treasures: a craggy limestone massif of fantastically eroded spires, known as “tsingy” in the local dialect. While Ankarana has been widely appreciated by tourists for these amazing geological formations and for the ubiquitous Madagascar lemurs, it is also beginning to receive due recognition for its role as home to a variety of unusual bats.

As the number of visitors at the reserve increases, so does concern on the part of Ankarana’s administrators about the effect of tourism on bat caves. Ankarana contains a large number of caves, which provide important roosting habitat and hibernation sites for a number of bat species. At the request of the park’s administration, I undertook a sur-vey to acquire baseline population numbers and assess the impact of ecotourism on the bats.

To begin the population survey, I chose several caves within the reserve. Some were known to be heavily used by tourists; others were not. At each of these caves, my research assistants and I searched the interior to determine if bats were likely to be roosting in areas susceptible to harassment or disturbance, such as low-ceiling areas or heavily used paths, and we counted the individuals and clusters of bats found. In addition, we performed exit counts at the caves and used mist nets to capture bats for identification.

Our results were intriguing. More than half of the 24 bat species of Madagascar were roosting and foraging within the boundaries of the Ankarana Reserve. With 13 species (which could be an underestimate given that our study concentrated on cave-roosting species only), Ankarana is without a doubt the flagship for bat biodiversity on Madagascar and should be considered of great importance on that aspect alone. Also noteworthy, however, were some of the species observed. There was no prior record of Martienssen’s free-tailed bats (Otomops martiensseni) at Ankarana, but we found them roosting in large numbers in at least one cave. We also saw Madagascar flying foxes (Pteropus rufus) foraging within the reserve. Although the roosting trees normally used by this latter species don’t occur at Ankarana, several plants vital to their diet do.

Another observation during our study was the distressing downside of ecotourism. On several occasions we found batons that tour guides had used to disturb bats for visitors on cave tours. Fortunately, all guides must have permits, so we asked the organization that grants the permits to inform current and potential guides of the negative impact their activities can have on bats. We also suggested that brochures be made available to tourists on the importance of bats and their need to be left alone.

In addition, park employee training was, and continues to be, an integral part of our work at the reserve. The initial training for “L’equipe de Chauve-Souris” (the Bat Team) included general information about bat biology, the importance of bats in ecosystems, and bats’ beneficial roles in insect control. We then taught the team simple census methods for further monitoring of the populations. They will continue these counts on a monthly basis and record the results in a database.

With proper care, it seems likely that increased ecotourism will have a positive impact on local economies and could be beneficial for bats, too. There has been much publicity about Madagascar recently, and now almost anyone with an interest in conservation is aware of the problems the island faces–most notably, an ever-increasing population coupled with inefficient and destructive agricultural practices. Although 70 to 80 percent of the forest cover is gone, the government is now taking steps to preserve its remaining biological heritage. With continued study and education, we are hopeful that the bats of Ankarana will thrive and will be appreciated by many visitors yet to come.

James Hutcheon is a graduate student at the University of Wisconisn in the Department of Zoology. BCI helped to sponsor earlier work that he and his wife, Michelle Zjhra, conducted on Madagascar’s Masoala Peninsula. They wrote about this work for the Summer 1994 issue of BATS.

The author would like to thank WCS Madagascar, WWF-Montagne d’Ambre, the University of Wisconsin Zoological Museum, and the Missouri Botanical Garden for financial and logistical support.

For further reading about Madagascar, the author recommends:

Lemurs of the Lost World by Jane Wilson, Impact Books, UK; andMuddling Through in Madagascar by Dervla Murphy, Murray, London 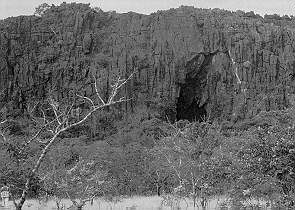 One of the famous cliffs of the Ankarana Reserve. 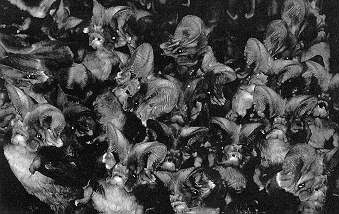 The author was surprised to find a large number of Martienssen’s free-tailed bats roosting in a cave in the Ankarana Reserve. This species had never before been recorded at the reserve.