After the first 11 week season of the Sonoran Desert Bat-Cactus Project, the volunteers who made the study possible accumulated many memories of what it was like to participate in a research project.

Mary Lou Alley-Crosby, a BCI member from Washington, took time from her job as a court reporter to join the team in early May. "After 12 days and nights, I now realize that research results are based on repetitive tasks, patient attention to detail, strength, energy, and sweat."

Up at three in the morning, climbing cacti in the dark, hauling heavy extension ladders around from place to place, racing the clock to take the night experiments down and put day treatments up before dawn–that was how a typical day began for many of us. Peg Horner, the project's chief research assistant, remembers the ladder, "Always the ladder. We were either on it or Mary Lou was carrying it."

"But there were also desert sunrises heralded by coyote anthems and a mourning dove chorus," Mary Lou remembers, "and between daytime plant treatments, rest on the shell-littered floor of an ancient sea, shaded by a giant cardon cactus, alone except for a cooling breeze and watchful lizards.

"Finally, there was good company which lightened the work, barefoot beach walks in the edge of the surf, and a class in making flour tortillas taught by Lupita, our cook, who watched with amusement as thick rectangular, triangular, anything but round, tortillas escaped from our unskilled hands and flew through the air."

Pat Morton, BCI's Director of Education, assisted with the initial set- up of the project and helped recruit most of the BCI members who participated as volunteers. "Growing up in the Midwest and never having traveled to a desert, I assumed it to be an odd landscape and inhospitable place–too hot, too dry, with too many thorns and spines to make a visit at all pleasant. Nature seemed to be saying. 'Stay away.' Now having had the opportunity to spend two weeks working in the Sonoran Desert, I found it to be anything but uninviting."

Pat discovered that the desert abounds with life. "In all stages of life and decay, cacti provide homes and food for many kinds of insects, reptiles, birds, and small mammals. The open character of the desert provides the watchful eye with frequent opportunities to discover the flora and fauna that call the desert home."

Peg Horner and Mari Murphy, BCI's Publications Coordinator, discovered evidence of some of that life one morning after their vehicle broke down ten miles out in the field, signs they might never have seen had they been busy kicking up dust in a truck. Still early in the morning, they started to walk back, confident they would meet rescuers who would come after them when it was discovered they were late. Sidewinder tracks skittered across the dusty road, and along the edge they discovered fresh mountain lion tracks, following them until the footprints went off into the desert. Later, the huge tracks were also seen at "Saguaro Junction," a mile back, where we did our work with saguaro.

The volunteers all worked hard, often under trying circumstances. Without their assistance, the first season of the project would not have been possible. BCI thanks this year's participants, Mary Lou Alley-Crosby, Janet Debelek, Kim Duffek, Bert Grantges, Peg Horner, Ted May, Pat Morton, Mari Murphy, Mary Schanz, and Tracy Truppman. Special thanks to David Yetman for obtaining permission to study on private land and to Bill Risner for use of his house for the research team.

Pending funding requests, the project will continue in early spring of 1990 through the end of June. Volunteer opportunities are limited, but will be considered. Volunteers must be able to commit to a minimum stay of two to three weeks, as well as pay for and make their own travel arrangements to Bahia Kino, a seaside village in Sonora, Mexico, accessible only by bus or car. Requirements? An ability to get along with people in close quarters, work long hours on little sleep, endure (sometimes) intense heat, be strong enough to carry ladders, and to not be afraid of heights, hard work, or the dark. Rewards? Many. 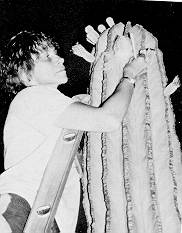 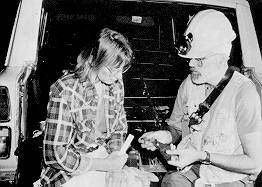 Pat Morton and Ted Fleming (center) collect data on a long-nosed bat before releasing it into the night. 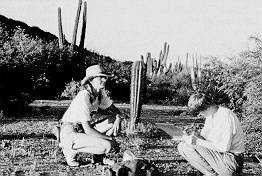 (Bottom) as the sun comes up, Kim Duffek (left) takes a break while Peg Horner (right) finishes her notes from the morning's work. PHOTOS BY MERLIN D. TUTTLE