Researchers find a species of bat never before found in Texas . . .


One of the greatest thrills for a field biologist is discovering something unexpected. I felt that excitement last fall as part of a team that caught the first western yellow bat ever found in Texas.

Our research group, from Texas Wesleyan University and the University of Texas at Arlington, was in Big Bend National Park to document the status of several rare bat species. The bats we were catching ranged in size from the tiny western pipistrelle (Pipistrellus hesperus), which is comparable to a rather large moth, up to the western mastiff bat (Eumops perotis), the size of a small falcon. Over the course of the summer, we caught more than 700 bats of 16 species and identified several roosts.

After hundreds of hours of work, we had become pretty familiar with the bats of the area. But on Saturday night, October 12, we were all caught off guard. Early in the evening, Jana Higginbotham, the graduate student coordinating our fieldwork, saw an unusual-looking bat hit one of our nets. Before she could get to the netting, the bat flew free. We were all disappointed and speculated about what species the light-colored bat could have been. Later in the evening, Jana shouted out that we had caught another one. She carefully removed it from the mist net and brought it back to our camp. Everyone gathered around, babbling excitedly. Under the dim light of headlamps and with only a single reference book, we weren’t sure what we had caught. We eventually decided that it was a southern yellow bat (Lasiurus ega). This was big news because in Texas they are only known to live along the southern gulf coast, over 350 miles away.

As we researched the life history of yellow bats, we realized that there was another possibility. The western yellow bat (Lasiurus xanthinus) lives further west and to the south in Mexico. The only truly reliable way to distinguish these two yellow bats is by genetic testing. In March we conducted DNA tests, and sure enough, we had captured the first western yellow bat in Texas. This revelation occurred months after we had first held the bat, but that didn’t lessen the joy of knowing that we had found something never before seen in that area.

We will be back in Big Bend this summer continuing our research on rare bats. This time the western yellow bat will be one of our priorities; we will keep visiting the same area to see if there are more, and we plan to start looking for roosts. Palms, which the other species of yellow bats like so much, are not native to the Chihuahuan desert, but we know of some that were planted as ornamentals near the Rio Grande. You can bet we’ll be checking them. Just as the southern yellow bat is spreading in South Texas because of decorative palms, we may also have found that the western yellow bat has moved into West Texas with a similar incentive.

Mike Dixon is a biology professor at Texas Wesleyan University in Fort Worth, Texas. 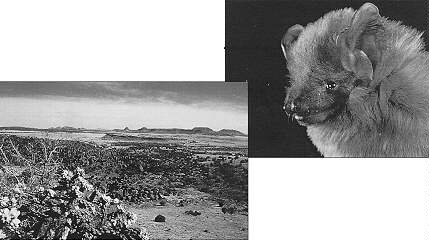