MOST ANIMALS GIVE BIRTH alone, and bats have been thought to be no exception. But a chance observation of a young captive-bred Rodrigues fruit bat (Pteropus rodricensis) struggling to give birth proved the exception to the rule. Rodrigues fruit bats, from the Indian Ocean island of Mauritius, are highly endangered with only 350 believed to remain in the wild. There are, however, several protected colonies in captivity.

It was at the site of one of these, the Lubee Foundation in Gainesville, Florida, where biologist Thomas Kunz was conducting research. He was deep in his work when a keeper alerted him to a drama in another cage. A female bat was obviously having great difficulty giving birth. For one thing, she was in the wrong position. Bats, who normally perch head down, usually give birth in a head-up, feet-down position, the same position used when they defecate or urinate. But this expectant mother was in the regular roosting position. Then another female came over and did an astonishing thing. Perching directly in front of the laboring mother, she herself assumed the correct birthing position and began to emulate straining and contractions-as if to say “here’s how you do it.” The midwife bat also began licking the mother’s vagina to stimulate birth, periodically wrapping her in outstretched wings.

Flying foxes normally give birth in about 40 minutes. But this behavior continued for some three hours, during which time the mother moved into the birthing position only after the helper “tutored” the mother again and again. Except for one instance, the mother assumed the correct feet-down birth position only after the midwife demonstrated. During this time several other females appeared interested, but did not approach the pair. As the actual birth began, two males repositioned themselves between the mother and the researchers, spreading their wings when the researchers tried to move closer.

Finally, a wing and foot of the pup emerged-a breech birth. The midwife alternately licked the pup vigorously and fanned the mother when she was in the correct birthing posture. With the midwife’s wings almost completely embracing the mother, the pup was at last born and cried almost immediately. While the midwife groomed the mother, another female bat arrived to fan the three of them. It was soon obvious that the exhausted newborn was having difficulty reaching its mother’s breast. Despite attempts from both the mother and her helper to assist the pup, it fell six feet to the ground. In the wild, the fall would have been 100 feet or more to the forest floor,
and the pup would not have survived. No attempt was made to retrieve the pup by either the mother or midwife. But in a captive colony, a rescue seemed justified. Kunz stepped in, returning the baby to its mother, and she readily accepted it.

Very few examples of this type of allomaternal (care-giving) behavior have been observed in animals. Among them is a single similar observation in bottle-nosed dolphins (Tursiops truncatus). In fact, this care-giving behavior appears to be common only in the spiny mouse (Acomys cahirinus). But just because scientists have rarely observed it in other animals doesn’t necessarily mean it is unusual. Because most animals about to give birth are wary and take special precautions to be alone during this time, they are difficult to observe. Kunz speculates that the very fact that it does occur, and in such highly diverse animal groups, suggests that it may be more common than previously thought.

What does the midwife get out of it? No one knows for sure, but since the bats were unrelated, the helper might possibly benefit from improved social status or better integration into social units. Both the mother and the helper were the same age, about three years old. Kunz points out that this theory is consistent with the pioneering research of Gerry Wilkinson on vampire bats: that roosting association may be as important as relatedness in explaining apparently altruistic
acts in bats. We might therefore expect that the helper may have the favor returned some day. Kunz goes on to say that reciprocity need not involve the same act. The favor may also be returned by sharing access to food or providing some other assistance at a later time.

The unusual response to the mother’s distress by the midwife also poses the question (at least to nonbiologists) of whether she understood that her roostmate was in trouble, but the idea that bats or other animals might actually “think” is something most scientists do not readily acknowledge.

(Sidebar)
“DISCOVERIES” invites the submission of bat-related research findings that researchers would like to share with the readers of BATS. Just provide a copy of your paper or any other information about your findings, and state availability of photos or illustrations. If we use your material, you will have an opportunity to review what we write. Send your contributions to The Editor, BCI, P.O. Box 162603, Austin, TX 78716. 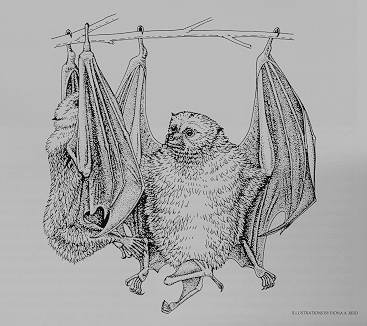 When a pregnant mother Rodrigues fruit bat had difficulty giving birth, another female came to assist her. Only after the helper repeatedly ‘tutored’ her did she assume the correct feet-down birthing position. Note the baby’s foot and wing just beginning to emerge from the mother on the right. 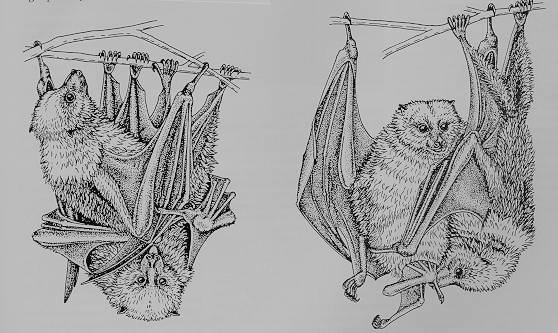 When the mother went back into the cradle posture (left), the helper supported her from below and behind, occasionally fanning the pregnant female with her wings, and showing her again and again how to move into a birthing position. When she at last did, the helper groomed her and the emerging pup (right).