Throughout North America, bats that were once abundant are in trouble, primarily due to disturbance at their roosts…

by Jeffery A. Gore and Julie A. Hovis

AS SOON AS WE SAW the half-inch screen covering the entrance gate, we knew there would be no bats in Sweetgum Cave. A short time later, at the end of a long passage in the cave, our expectations were confirmed. Not a single bat was present, even though broad stains on the ceiling and deep piles of guano told us tens of thousands of bats had roosted here in past years.

For more than 90 years this cave in central Florida had been known as a maternity roost for southeastern bats (Myotis austroriparius). This species typically raises young in large colonies in caves. Because suitable maternity caves are few and often easily disturbed, each loss of a roost like Sweetgum Cave makes the southeastern bat more vulnerable to extinction. The southeastern bat is one of 18 candidates for federal listing as threatened or endangered; the information needed to make an informed decision on its status is only slowly becoming available.

As biologists for the Florida Game and Fresh Water Fish Commission, we were concerned that southeastern bats might be suffering a decline in their critical cave habitat in Florida. Similar losses elsewhere have threatened other cave-roosting species, notably the federally endangered gray bat (Myotis grisescens). Our Florida survey is of special interest because of the unusual distribution of southeastern bat maternity colonies.

Southeastern bats occur in a broad band from Indiana and Illinois south along the Mississippi River and around the southeastern coastal plain to North Carolina. Despite this rather wide distribution, few maternity colonies have been discovered outside of Florida. Our preliminary review of published reports and conversations with bat biologists produced records of only three such maternity caves, each housing several thousand adults. Florida, on the other hand, has at least 18 current or former maternity caves which, in past years, potentially contained 400,000 adult females.

The disparity between the number and size of maternity colonies in Florida and the rest of the southeastern bat’s range emphasizes how little we really know about the biology of this species. For example, are caves actually the most productive maternity roosts or just the most obvious? Several small maternity colonies have been found in buildings, cisterns, and culverts, leading us to conclude that southeastern bats are not as dependent on caves as some related species.

In southern Illinois, Gene Gardner, a biologist with the Illinois Natural History Survey, recently radio-tracked several southeastern bats and found a small maternity colony in a hollow tree within a hardwood swamp. If this is a typical roosting site, it might explain why so few roosts have been found, and it could mean that roosts are not a limiting resource to the population. If we are to learn the status of the southeastern bat throughout its range, more work needs to be done to determine the relative importance of cave and non-cave roosts.

But a more urgent question faced us: how many of the known maternity caves in Florida were still active? To obtain some measure of the status of maternity caves in 1991, we surveyed all known summer roosts in the state to determine whether female southeastern bats were present, and if so, how many. We were fortunate to have an assessment of the former status of most of the cave roosts thanks to the observations of other biologists, particularly Dale Rice, who studied these bats in the 1950s. In addition, in tracking down leads on reported colonies, we had visited many of these and other caves over the past few years.

Based on these sources, we compiled a list of potential maternity caves and surveyed each in the spring just before young were expected to be born. For each occupied cave, we also conducted a follow-up survey later in summer to see if the colony successfully produced a new cohort of young bats. Unfortunately, what we found was not encouraging. Of the 15 caves known to have regularly supported a southeastern bat maternity colony in the past, only five still contained bats in 1991. (Three additional caves, with no previous record of bats, were also brought to our attention by other biologists or cavers and found to contain bats.)

Finding only eight maternity caves occupied, including just five of the traditional caves, was alarming. Estimates of colony size are very crude, but in 1991 we found less than half the 400,000 adult females compiled from earlier observations. We were obviously dealing with fewer bats, but were they simply using fewer roosts? Had some moved to other caves? Other than the three new colonies already mentioned, and a small colony in southern Georgia, we knew of no new summer colonies. Even assuming the bats did move to some unknown site, why did they do so? Did a new, more productive cave appear, or did traditional roosts suddenly become unsuitable?

To anyone familiar with the sensitivity of bat maternity colonies in caves, the probable answer is that the bats were driven from their roosts. Our observations suggested why they left. Ten formerly occupied caves were vacant and at three the cause was sadly obvious: the entrance had been improperly gated or filled in. At four other vacant caves there were signs of frequent or intense disturbance by humans. Graffiti, litter, spent ammunition, and remains of fires were evident. In contrast, we found such disturbance at only one of the eight occupied roosts, and that proved to be the only occupied roost where we failed to capture young bats in our follow-up visit. Three vacant caves had not been frequently disturbed, but one of these was flooded and another had been isolated by clearcutting of the surrounding forest.

OUR FINDINGS DO NOT PROVE human activity caused the southeastern bats to abandon their former cave roosts or caused the number of bats to decline. However, no other factor distinguishes the occupied and unoccupied caves. Couple this with the well-documented sensitivity of maternity colonies of other cave bats and the fact that only eight southeastern bat maternity colonies remain in the state, and it becomes clear that Florida’s maternity caves urgently need protection.

Florida’s Cave Protection Act affords caves some protection, though enforcement is often impractical, especially at secluded caves. Nevertheless, some caves are well-protected. Ten years ago one of Florida’s most important maternity bat roosts for southeastern bats and gray bats was nearly bulldozed shut. It was largely through the efforts of Bat Conservation International that the plight of Florida’s bats became known to state and local conservationists. With help from BCI and The Nature Conservancy, Judge’s Cave was purchased by the state and is now one of the most secure.

The largest maternity roost in Florida is in a privately owned cave, and the conservation-owner has fenced around the entrance to protect the bats. Two other caves on private land are designated as Critical Wildlife Areas by the state and entry is prohibited. These caves, however, are not fenced or gated, and their status could change if the land is sold. The owners of all the other vacant or occupied maternity caves have been informed of the importance of their property, but the protection given these caves ranges from only signs and low fences to virtually none.

We are continuing to work with landowners, cavers, and conservation organizations to identify active maternity roosts and to limit disturbances in the caves. Conservation options range from outright purchase of caves, to obtaining easements that allow fences or gates, to simply gaining landowner cooperation in posting caves against trespass during the maternity season. Cave enthusiasts in the state have volunteered to help restrict access to the maternity caves and to continue educating novice cavers about bats.

With the continued efforts of many people, we hope that the next few years will see more maternity caves protected and an increase in the number of bat colonies. Then we can direct our efforts to learning more about winter roosts, non-cave maternity roosts, and the affects of pesticides and land-use changes. Maybe we can even get the bats back to Sweetgum Cave.

[bio]Jeff Gore and Julie Hovis are wildlife biologists with the Florida Game and Fresh Water Fish Commission. They study many species of nongame wildlife, but Florida’s bats include some of the most vulnerable and least understood species.

Maternity colonies of southeastern bats form dense mats in Florida caves. Few such colonies are known outside the state. 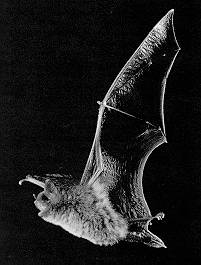 Populations of southeastern bats are steadily declining, and the bat is being considered for federal threatened or endangered status. 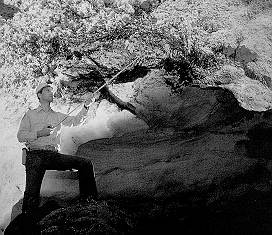 Jeff Gore checks the ceiling of a Florida cave for evidence of use by southeastern bats. Roosting bats leave a characteristic stain, giving scientists clues about past use.