When two bat rehabilitators witnessed the same unusual activities in their colonies, they realized they had discovered behaviors never before documented . . .

Last December (1994), as I began my daily bat care routine, I heard a faint, birdlike singing coming from my captive colony of Mexican free-tailed bats (Tadarida brasiliensis). The song was unlike any I’d heard before, and I was intimately familiar with each of the 23 individuals in the colony–a group of nonreleasable, injured or orphaned bats accumulated in the course of my wildlife rehabilitation work. I recognized the sound of Hannah’s buzz when she squabbled over a prime roosting position and Wheatley’s pitiful squeal when one of the more aggressive souls chased him away from the mealworm tray. I knew Amy’s little chirp when the sun set and she was expecting to be hand-fed. But the singing I heard in December was something I’d never heard before.

Each time I poked my head into the cage to investigate, the singing ceased. It was, in fact, another couple of weeks before I was able to catch anyone in the act. It was Hank, an adult male, who appeared to be directing his song to a small group of females who were sharing his roosting pocket (one of several handmade fabric pouches placed throughout the bats’ cage). In the weeks that followed, the males in the colony became uncharacteristically aggressive, relentlessly chasing one another away from the areas each guarded. I found this behavior odd, as free-tails are normally quite social, preferring to roost together in one big cluster. When I attempted to “rearrange” everyone into their previous roosting patterns, they immediately scampered back to the new territories they had claimed in a flurry of flapping wings and irate buzzes of protest.

I was confused and a bit concerned by the sudden change in behavior in my familiar little colony. They’d been quite content with one another’s company for the past year. Oh, they had squabbled among themselves–pushing, shoving, and swatting at each other with folded wings now and then. But previous conflicts had always been quickly resolved without any physical injury, the offenders cramming their little behinds up against one another quite amiably mere seconds after disputes began.

These days their arguments appeared more earnest. I realized it was no longer a matter of all bark and no bite as I watched in surprise while Hank darted out of his pocket, buzzing loudly, and chased Joshua, who had ventured too close to the wrong territory. Before I could intervene, Hank, who was now irate, caught up with the intruder and latched onto his ear. I had no more than rescued Joshua, when much to my disgust, he bounded out of my hand and back over to Hank’s territory, ready to resume the fight.

I wondered about the renewed vigor of these disputes and decided to contact Amanda Lollar, a BCI member and licensed wildlife rehabilitator known for her expertise in the captive care of Mexican free-tailed bats.

Singing males? She’d heard it before. I was more than a little surprised when she informed me that Hank was most likely “singing to his women” and that pups would probably be born the following summer. Very little is known about the mating behavior of the Mexican free-tailed bat, and I hardly expected such behavior to be going on in my captive colony. These were, after all, nonreleasable bats with various disabilities–certainly not the sturdy lot one would expect to be participating in such activities. But I listened with interest as Amanda described similar occurrences observed in her captive colony the previous year.

She informed me that I could expect the singing and male aggression to continue at least through February or March, and that I should be prepared with extra mealworms for Hank’s “women,” who would subsequently develop a dramatic increase in appetite. I took another look at my somewhat scruffy little group and decided it was not likely.

I was reconsidering by February, however, as I treated yet another bite wound on Joshua’s ear. The males buzzed and chased one another relentlessly from one roosting pocket to another. And Hank had become almost intolerable, even running after my hand whenever I reached into his roosting pocket to remove a female at feeding time. He carried on in a most annoying manner the entire time I hand-fed the others, and when the sun rose again, he could be heard singing his quiet little song.

A month or two later, Mindy, LuAnn, and Amy began consuming nearly double their normal daily intake of blended mealworms. All three continued to self-feed as well, gulping down more whole worms in an evening than I ever imagined the stomach of an 11- to 15-gram animal could hold. And all three had been roosting with Hank!

I contacted Amanda again, questioning her in depth about the curiosities of her colony. She said she had begun having suspicions the day she took Fu, an adult male, to the vet. She had observed him pressing his pelvic area against the cage wall and noticed that his urine appeared cloudy. Concerned that he might have a urinary-tract infection, she called her veterinarian. When Dr. Jarrett told Amanda that microscopic examination revealed bat sperm, she began viewing the bats’ behavior in an entirely new light!

She then described the territorial behavior exhibited by the male bats during the months they were singing. They marked off areas in the cage and roosting pockets, rubbing their chests and scented throat glands against the surfaces. They also ferociously guarded these areas, both vocally and physically, chasing off any intruding males. Meanwhile, the females “checked out” different males’ pockets.

During this conversation I realized the importance of the information Amanda had obtained in the 10,000-plus hours she’d devoted to the study and care of these animals. Soon thereafter, we decided to work together to document the behavior associated with the mating that appeared to be taking place in our captive colonies.

When the singing stopped, the females in both colonies moved to alternate roosting areas, each with an adult male other than the one who had originally sung to them. Although Hank subsequently became his usual passive self, the second male (Wheatley, in my colony) went on to guard the pregnant females as ferociously as Hank had during the time he had courted them.

In late June, as I removed the last bat from one of the roosting pockets for feeding, I spotted a pink male pup no bigger than a walnut. With his umbilical cord still attached, he was already following his mother around inside the pocket. Twelve days later, I had the pleasure of witnessing the birth of Christopher Robin, the second baby born in my colony. Mother and pup exchanged a series of high-pitched peeps or “directional calls” that they continued to use to locate one another throughout the weeks the pup nursed. Christopher Robin was born with eyes open and was licking and cleaning his tiny wings within minutes of birth.

Although the females in my colony gave birth and subsequently cared for their pups in a variety of roosting pockets throughout the cage, the females in Amanda’s colony gave birth in the same pocket where they had been guarded during pregnancy. The male guard, Orbit, appeared to continue protecting the young after birth, allowing only their mothers to enter the nursery.

Prudence, one of the females in Amanda’s colony, provided a final note of interest. After giving birth to a stillborn pup, she entered the nursery and began nursing Pugsley, the female infant of another mother. Although Pugsley’s mother continued to nurse her as well, Prudence went on to act as a surrogate mother, also nursing the little pup for the next three weeks. Pugsley thrived under the care of the two females and became quite chubby within a few short weeks!

Although the captive behavior of any mammal will, by necessity, differ to some degree from that in the wild, we knew that the mating song we’d heard in our colonies was an important aspect of the behavior of Mexican free-tailed bats never before documented. Amanda and I recorded each element of the behavior we observed, and the resulting report, “Notes on the Mating Behavior in a Captive Colony of Tadarida brasiliensis,” has since been published in the Spring 1995 issue of Bat Research News.

Barbara French is BCI’s Conservation Information Coordinator. Amanda Lollar is the author of The Bat in My Pocket: A Memorable Friendship (available through the BCI catalogue) and director of the nonprofit BAT WORLD Sanctuary and Living Museum in Mineral Wells, Texas. 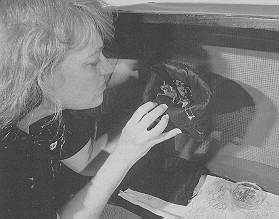 The author checks on a pocket of roosting bats, including Hannah, LuAnn, and Hank. With a minimum of three hours per day devoted to the care of this colony, she can easily identify any individual as soon as it peeks its face into the open. 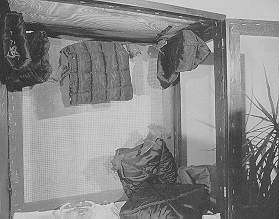 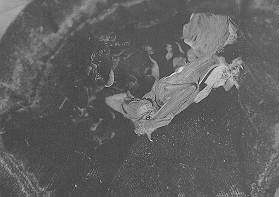 Top: During the mating season, there is increased activity in the colony as male bats aggressively defend their roosting territories. Bottom: Hank guards the opening of his pocket, protecting his females inside and chasing off any intruding males. 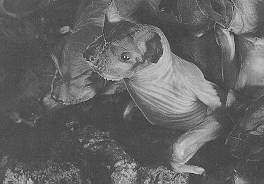 Newborn Mexican free-tailed bats have no fur and must cluster together for warmth. Pups are born eyes-open and feet-first. The author has observed them apparently beginning to groom themselves with their feet even before they have fully emerged from the birth canal.