To most people in India, especially those in rural areas, bats are not attractive. The exception is the large Indian flying fox (Pteropus giganteus); for many, this bat is considered sacred.

Indian flying foxes are found throughout India. Like others of their species, they are gregarious and tend to form large social groups. With a wingspan of four to five feet, Indian flying foxes are very conspicuous in their open roosts in large trees such as banyan and tamarind where they spend their hours of rest. During the daytime they fan themselves with membranous wings, crawl over the branches, seek mates, defend favored roost location against other bats, and if a stranger approaches, they squawk and chatter loudly. Since they share their habitat with common birds of India such as the blue jay, crow and myna, the greeting chorus can be deafening. Just after sunset the bats begin leaving their tree roost for feeding. They return about two hours before sunrise after feeding on a wide variety of fruits, including figs, mangoes, guava and neem (Azadirachta indica), a tree native to India, whose seeds are dispersed by bats.

One colony of around 500 Indian flying foxes roosts in a huge banyan tree in the small village of Puliangulam, about 40 miles east of Madurai in southern India. The colony is considered sacred and treated with special care. When a team of researchers from Madurai Kamaraj University visited Puliangulam to talk to the local people about their beliefs concerning the flying foxes, an 80-year-old woman reported that the colony had occupied the tree even before her birth.

According to the villagers, the bats seek protection from a God named Muni who dwells around the tree. They never disturb the bats and do not permit others to do so even when only a glimpse is wanted. Those who do not heed the protests of the protective villagers may find themselves in an adamant quarrel; if a villager fails to protect the bats, even in circumstances beyond their control, they believe Muni will punish them. Punishment can be rendered in the form of a business loss, an accident, or can be as severe as a death in the family. Those who are punished approach the God and seek forgiveness by offering prayer and "pooja," a customary ceremony (after "pooja," sweet rice, coconut and banana is distributed to those in attendance). The villagers say that about eight such cases have happened. But while the live flying foxes must be protected at all costs, freshly dead bats found on the ground are taken for food, but only after prayers are offered to Muni.

Indian flying foxes are considered sacred in a few other villages in southern India,* and several in northern India as well. Even though some populations of these flying foxes are protected because of their sacred status, bats in unprotected colonies are killed as a source of protein and also because they are thought to possess medical powers.

There is no official protection for Indian flying foxes or the other two species of flying foxes in India, and in fact, The Wildlife Protection Act of 1972 of the Government of India consigned them all to Schedule V–vermin. Misconceptions about them persist. Dr. M.K. Chandrashekaran, a member of BCI's Scientific Advisory Board at Madurai Kamaraj University, and a group of colleagues, are working to change attitudes through education. Their highly successful biology exhibit in 1986 drew the interest of thousands of students, and even gained the praise of India's Prime Minister, Rajiv Gandhi, and his wife. Requests to have the flying foxes of India removed from the list that officially recognizes them in the same category as poisonous snakes and rats are still under consideration.

(Bio)
Dr. G. Marimuthu, a BCI member, is a lecturer in Animal Behavior at Madurai Kamaraj University, India. He has been studying the behavior of insectivorous bats for over 10 years and is an Associate of the Indian Academy of Sciences. 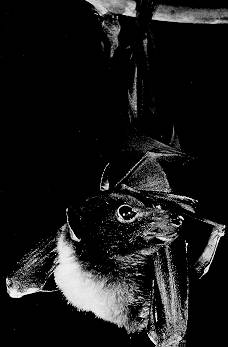 Above: The Indian flying fox is viewed as sacred in some parts of India.
PHOTO BY MERLIN D. TUTTLE

Below: The villagers of Puliangulam believe that the Indian flying fox colony that roosts in this banyan tree seek protection from the God Muni, whose shrine is beneath the tree.
PHOTO BY G. MARIMUTHU