In 1978 I began a search in western Oregon and southwestern Washington for a maternity colony of Townsend's Big-eared Bats (Plecotus townsendii) to study their foraging, reproduction and growth. I reviewed the literature and museum specimens finding twenty locations, from which I hoped to find a suitable colony. All sites were visited and no active colonies or even solitary bats were found.

I then began correspondence with Dr. Clyde Senger, who had reported declines in populations of this species in southwestern Washington. The only maternity colony known to him in my proposed study area had been extirpated prior to my arrival, and a check of neighboring farms and abandoned buildings resulted in no evidence of any colony or individual bats.

With this data in hand, I contracted with the Oregon Department of Fish and Wildlife to conduct a survey of all bats in Oregon, to ascertain the status of Townsend's Big-eared Bats and other species previously recorded from this area. The State was divided into five areas, one to be surveyed each year, beginning in 1982.

Survey results were worse than I had anticipated. The first year's survey covered fourteen northwestern counties. Only one roost of 10 Townsend's Big-eared Bats was found. Second and third year results indicate Townsend's Big-eared Bats have been extirpated from three of the five physiographic provinces in western Oregon, and from known historical sites in northeastern Oregon. Two northeastern sites with about 30 bats total, are the only sites known from this area.

Western Oregon populations now number less than 1,000 individuals at eleven sites, including 400 at one coastal site. Known populations in western Washington are less than those of western Oregon, with most of the bats concentrated in the cave areas nears Mr. St. Helens and Mt. Adams.

The Oregon Department of Fish and Wildlife and the Washington Department of Game are now considering addition of the Townsend's Big-eared Bat to their lists of endangered species, and the U.S. Forest Service and the Bureau of Land Management have granted sensitive status. They also are preparing guidelines to protect and monitor present populations and associated habitats.

To aid guideline formulations, I assessed past activities which had disturbed roost sites of Townsend's Big-eared Bats. At least two roost sites in eastern Oregon were destroyed due to the belief that bats were rabies vectors. A subsequent rabies study, finding no rabid bats, needlessly killed many more. Cave exploring is another activity which has resulted in extirpation of bats. Bat populations have plummeted or disappeared in the following locations due to improperly timed recreational activities: Bat, Ice, and Noel's Caves (Oregon) and Ape, Boulder and Powerline Caves (Washington). Banding studies have resulted in population drops as large as 80% at Bat (Washington), Boyd, and Skeleton Caves, and at various unnamed caves in central Oregon.

Vandalism has been reported at two sites. In 1930, Vernon Bailey reported that vandals lit fires under a roost of Townsend's Big-eared Bats near Portland. No bats have been found at that site since. A roost in an old grist mill in southwestern Washington was extirpated due to vandalism, and several checks in recent years indicate the colony no longer exists.

Completed protective guidelines by governing bodies include: 1) minimize site disturbance by limiting public access during critical use periods; 2) minimize surface alterations that would jeopardize bat populations; 3) monitor (annually) populations to detect adverse changes; and 4) restrict scientific studies to those which minimize colony disturbance and will derive the greatest benefit for protection and recovery of the species.

Priority has been placed on preservation and recovery of Townsend's Big-eared Bats by Oregon and Washington. Hopefully these agencies will continue to fund research and cooperate in assuring survival of this as well as other bat species. If so, perhaps the recently alarming declines can be reversed. 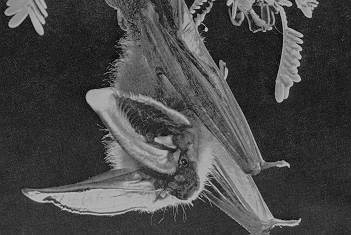 A Townsend's Big-eared Bat (Plecotus townsendii). These bats range primarily from southern Mexico through the western United States to Canada. Two eastern subspecies (P.t. ingens and virginianus) already are federally listed as endangered. These bats are highly susceptible to human disturbance and may be declining rapidly over a much wider range than has yet been recognized. Photo courtesy Merlin D. Tuttle