An increasing number of bat populations are declining due to the activities of humans, but a few species appear to take advantage of new circumstances in a changing world. The northern bat (Eptesicus nilssoni) of Sweden seems to be such a species. Found from the agricultural lowlands in the southernmost part of the country, the northern bat ranges as far north as the sub-arctic taiga near the Arctic Circle, one of the northernmost ranges of any bat known. It is also found throughout northern Europe and Asia.

Because of the Gulf Stream and prevailing southwestern winds, the climate of Scandinavia is much warmer than its latitude suggests, and the bat fauna is richer than might be expected. Sixteen species of bats, all insectivorous, have been found in Sweden. All but three species are restricted to the southern half of the country, but the northern bat is the only one found above 65 degrees north (about 70 miles below the Arctic Circle).

Nine species are common or have wide distributions, and seven are rare and occur only locally. Two of these are incidental and may not occur regularly, and five appear on the IUCN Red List of threatened species. The barbastelle (Barbastella barbastellus) is regarded as “vulnerable” and Bechstein’s bat (M. bechsteni) as “endangered.” Considered very rare, they recently have shown serious population declines. Unfortunately, little is known about their needs, and conservation efforts have mainly been restricted to protection of known hibernation sites.

In contrast, northern bats are very common in Sweden and probably are increasing in many habitats. I chose to study the ecology of these bats because I was curious about the reasons behind their extreme distribution and also their apparent success in recent years.

Today, northern bats are most often found in human dwellings. Almost every known maternity colony resides in houses, apparently taking advantage of the predictable warmth. Summer colonies are normally small, composed of 10 to 50 females. Any type of house seems to fit their needs, as long as it provides heat and is situated near good feeding grounds. This implies that there probably are abundant potential roosts throughout the Swedish countryside. In winter, northern bats use other man -made structures for their roosts. The Swedes traditionally store potatoes and vegetables in small local cellars that provide excellent hibernation sites for these bats. Even in the coldest winters, most of them apparently hibernate in storage cellars.

The bats usually return to the same house and cellar year after year. Although they are typical “house bats,” they seldom cause serious problems for homeowners. With their habits of living in small, rather quiet groups that hide in inaccessible cracks and spaces, their presence is usually accepted, and northern bats are unlikely, therefore, to suffer seriously from harassment.

An overwhelming problem for many bats is obtaining the large quantities of food needed to reproduce. I wanted to know what, where, and when northern bats eat. Since I expected considerable variation with latitude (because the habitats, and presumably the insects, are different), I made field studies in both parts of the country at 65 degrees N and 57 degrees N in the southern part of Sweden.

Analysis of droppings collected at different places in different seasons, together with observations of the bats at their feeding grounds, revealed several interesting patterns. In summer, northern bats rely heavily on mosquitoes and other dipteran insects, particularly in the north where summer nights remain light, and most feeding takes place in forested areas. In the south, they feed over lakes and farmland, and their diet varies accordingly, including dung -beetles, moths, and caddis flies as well.

Around midsummer in northern localities, the sun is below the horizon for only one and a half hours each night. Hence, bats have to fly in twilight conditions, and even in sunshine, to cover their energetic needs. They also have to face the risk of being taken by a sparrow hawk (Accipiter nisus), since these and other birds are active throughout the 24 -hour period at this latitude in summer. I have observed sparrow hawks attacking northern bats on a few occasions, and in one case, the bat was actually caught and eaten. But like most bats elsewhere, northern bats always forage during the “night,” perhaps because mosquitoes are most plentiful at this time.
Mosquitoes are certainly abundant enough in the northern taiga to support many bat colonies in summer, and with such abundance, bats are able to consume vast quantities very quickly. With a bat detector and a stop watch, I have recorded as many as 20 catches per minute, which means that one bat may eat more than 1,000 mosquitoes in an hour!

Summer nights are often cool at high latitudes, and northern bats avoid flying at low temperatures. In fact, they do not emerge to feed at all unless the evening temperature is above 45 degrees F because most insects are inactive at lower temperatures. Those that still fly are not numerous enough for bats to harvest efficiently. Regardless of how hungry a bat is, flying at low temperatures uses more energy than is gained from captures, so staying in the roost is probably the best option.

Summer cold spells are common in Sweden and sometimes prolonged as well, particularly in the north. Unfortunately, small mammals like bats cannot stay warm and active for more than a few days on stored fat. Females face the additional problem of reproducing and caring for young even when the food supply may suddenly disappear during a cold snap. Bats that live at high latitudes have an elegant solution to this problem: they become torpid periodically, a state in which they lower their metabolic rate and become inactive, thereby saving energy.

By becoming torpid, mother and fetus may survive periods of cold weather without risk of starvation, but there is also another important advantage: the fetus does not grow when its mother is torpid. Because lactation is the most energy -draining period, it is important that babies are not born until insect density has reached its peak. Births normally occur around midsummer, but during cold summers, may be delayed by as much as a month. Once born, northern bat babies grow very rapidly and start to fly when only two weeks old— much earlier than any other bat I know of.
Mothers must start feeding early in spring to give birth in time for the short summer season, and young bats are active into late autumn, learning the task of hunting and storing fat for their first winter. Nights are dark during these seasons, and few mosquitoes are available then, but another food source becomes available: insects attracted to street lights. A survey taken along roads by pointing a bat detector through a car window, revealed that nearly all northern bats changed their feeding habitat as the nights become dark in August. By moving a mile or two from the countryside toward lighted areas in towns and villages, northern bats could take advantage of a human -created environment to continue feeding during these lean months.

Observations suggest that northern bats’ key to survival in northern climates is extremely efficient harvesting, combined with using available energy to its best advantage. They also likely gain extra benefits by roosting near artificial heat sources in houses. I believe, but of course cannot prove, that northern bats became common animals only rather recently, when they moved into the warm houses of humans who later inadvertently extended the food supply for these bats during critical seasons by putting up street lights.

The future may be dark for the barbastelle and Bechstein’s bat in Sweden, but fortunately the situation does not seem bad for Swedish bats in general. Large concentrations of bats in caves and mines, which are very vulnerable to disturbance, are rare. Instead, most bats seem to live in relative peace in small groups in houses and cellars.

Hard work by a few bat scientists, popular articles, bat walks, and radio and television programs, have all increased public interest and knowledge about bats, and bats have benefited considerably during the last ten years. Inquiries about eviction of house bats have become rather infrequent, and I believe harassment from people no longer is a serious threat to most Swedish bat populations. All bats in Sweden were legally protected in 1986.

Ultimately, the greatest threat to all bats may come about through new agricultural and forestry practices which reduce the insect food base on a large scale. Certainly no bat will be able to survive and reproduce without adequate food. Another potential threat, at least if current forestry policy continues, is a decreasing number of roosts for bats that depend on hollow trees. This problem is not limited to Sweden, but is common throughout Europe and the United States.

In the meantime, the northern bat, with its remarkable ability to adapt, may find its own solutions for the future.

Jens Rydell is currently finishing a Ph.D. project about the ecology of the northern bat at the University of Lund in Sweden. 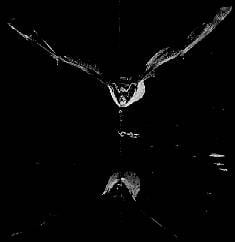 In the land of the midnight sun, northern bats must hunt for their dinner in twilight conditions because “night” never comes. But even under these conditions, mosquitoes are plentiful; the author has recorded as many as 1,000 catches in an hour. 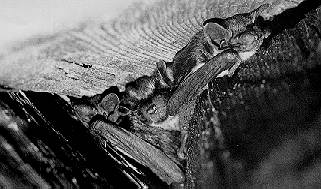 Hidden in inaccessible cracks and spaces, northern bats most often live in human dwellings, using them both for hibernation and raising their young. The bats return to the same house or cellar year after year, but seldom cause problems for homeowners. 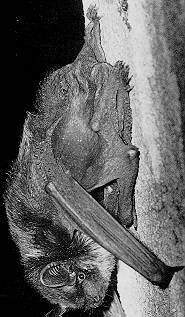 A mother northern bat nurses her young. Because of Sweden’s short summers, these babies must grow very rapidly. They fly and learn to hunt in only two weeks, much sooner than most bats.