A bat house in Germany becomes a welcome home for an injured mother bat, her pups, grand-pups, and more . . .

By Irmgard Devrient and Reinhard Wohlgemuth with Alfred Jasper

Translation from German by Katja Wagner

On the flat roof of our German apartment building in the city of Holzwickende, Nordrhein-Westfalen, stands a small, elevated house obviously not intended for humans. When twilight comes in the summer months, curious neighbors watch as shadows flutter quietly out of the house, across the rooftop, and into the sky.

The shadowy residents of our rooftop house are noctule bats (Nyctalus noctula), many of which have roosted here for five years. The colony started with a single female noctule, found injured in the downtown streets of nearby Bochum in April 1992. Her joints were damaged and her thumbnails severely worn. She could no longer fly and was brought to us for care.

Because we have been caring for injured bats for about 10 years, we already knew a bit about noctules. They are far-wandering insect eaters that roost primarily in trees, but sometimes in caves or buildings. From their summer roosts in eastern and northern Europe, some of them fly through our town in autumn to hibernate in southwestern Europe. They stop in our forests, using hollow trees to rest and mate. In the spring they return to their food-rich summer roosts to raise their young.

It didn’t take us long to figure out that our noctule was pregnant. About two months later, on June 7, she gave birth to twins, not uncommon for this species–one female and one male. The mother bat was very attentive with her pups, and the young bats quickly grew stronger.

We knew we would soon have to find a way to release the pups. Fortunately, Jurgen Gebhard from Basel, Switzerland, had a few tips to share with us. He had raised young noctule bats in Hofmatt, outside Basel, on a platform he referred to as a "station," and he had successfully released them. Friends from our local nature protection group helped us build a bat house station of our own design and attach it to our flat roof. The entrance is about 11.5 feet (3.5 meters) above the garden, and the house is almost six feet long and just over three feet wide (1.8 m x 1 m).

We placed the mother and her young in the house and nervously awaited our young bats’ first attempts at flight. Typically, a pup will make its first flight by its 28th day; our pups were 40 days old. Would they be able to find their

way back to the station without guidance from their mother? Could they survive their hazardous training ground? In the wild, bat pups get a second chance when flight-training; they can climb trees back to safety if they happen to land on the ground. But here in the city, there were only walls of brick and stone and hazardous traps such as chimneys and open sewer lines.

After a few failed attempts–flying against a window, into the garden pond, and into an open garage–the young female became oriented and flew into and out of the station. The young male, however, had a particularly difficult time. He made a good start, but couldn’t find the entrance to the station. After several hours of abortive attempts, we finally decided to try to help the young bat by positioning one of us on the garage roof. (At this point, it was four o’clock in the morning.) Reinhard volunteered to stand on the roof as a marker for the little bat. Our idea worked, but a little too successfully. In his confusion, the bat pup oriented himself on Reinhard’s familiar form, and without slowing, came in for a landing directly on his face.

Eventually both pups were flying, landing, and foraging for food very well. Autumn was just around the corner, though, and we were anxious about whether our two young residents would leave us, as they should, to go to a different roost for hibernation. When they finally did leave, our anxieties took another form: after six or seven months of hibernation would they come back to us and to their mother at the station? According to the literature, bats are very loyal to a roost and will almost always return to their birthplace. With assistance from the Alexander Koenig Museum in Bonn, we banded the bats so we could tell for sure.

As soon as spring drew near, Reinhard began checking the station every day. On the 26th of April, 1993, our female bat returned, and the male followed two days later. True to the literature, they have both returned every year since. The female now raises her own young here in our rooftop house every summer, and the male mates here.

Our little colony remained a family affair for several years. In the spring of 1995, a large group of injured noctules were brought to us. Six of the females had babies, which we later released from the house, just as we had our first two pups born there. Also, at least seven "strangers" have now learned about the house. They use it as a rest stop in their migrations, and some even stayed on in the fall and winter of 1996-97. As of spring 1997, nine bats have returned to the house. Six of these are females, which produced another 11 bat pups this past June. What was once a starter home for a small family has now become a popular bat hotel. We certainly hope the bats continue to spread the word about our accommodations; the large house still has quite a few vacancies!

Irmgard Devrient is a retired draftsperson and a bat rehabilitator. She also gives educational presentations about bats to biology classes at local schools. Since 1995, she has taught about 500 children in 20 schools.

Reinhard Wohlgemuth is a roofer and a bat rehabilitator.

Alfred Jasper is a retired consulting sales engineer and a BCI member. Jasper asked his friends Devrient and Wohlgemuth to write their story, then managed all German-English correspondence between BCI and the authors. 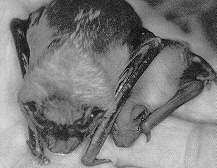 The authors’ injured noctule bat with one of her eight-day-old twin pups. 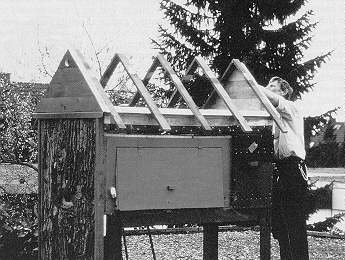 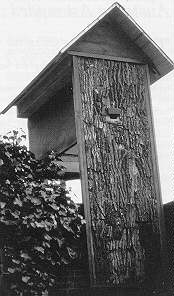 The completed bat house station, mounted on top of the authors’ apartment house.