Latest on Bats & COVID-19
Home News Bats Magazine Volume 10, Issue 1 The Next 10 Years: A Look to the Future

Training a new generation of conservationists will be an important focus for BCI in the decade ahead. . .

The impact of Bat Conservation International on the future of bats has been tremendous. In the 10 years since BCI was founded, awareness of the ecological and economic importance of bats and of their conservation needs has increased greatly. Today, many individuals, agencies, and organizations want to know how to help, but following decades of scientific neglect, we still lack critical knowledge vital to the future of many bats.

Almost nothing is known about the importance or status of most of the world’s bat species, though we are beginning to understand some of their more obvious values. Increasingly recognized by biologists as “keystone” species, some bats are so essential in the web of life that, without them, many other plant and animal species might die out, threatening entire systems of life. Certainly, the diversity of some ecosystems would be vastly different without bats.

To fill their important ecological roles, bats are needed in large numbers. Bat species are becoming extinct before we are even aware they are in trouble. Some have declined to the point where they may be biologically irrelevant, existing in numbers too few to make a difference. In many cases, we simply do not understand how to help them. The future of the ecosystems that depend on them are, therefore, also in jeopardy.

The fact that we know so little is one of our greatest impediments to saving bats. Few scientists study bat ecology and behavior; fewer still focus on research to understand conservation needs or to solve age–old bat-human problems. Conflicts, such as bats entering human dwellings, fruit bats damaging commercial orchards during droughts, and vampires harming livestock, must be resolved if bats are to be conserved. Massive anti-bat campaigns, such as those against vampires and fruit bats, can seriously damage national and local economies in developing countries, particularly in the world’s tropics where many commercial products are derived from bat-dependent plants.

In Latin America, where a large proportion of the world’s rain forests exist, millions of bats essential to forest propagation are destroyed each year in misdirected vampire-control programs [BATS, Spring 1991], a problem directly affecting people and economies, as well as rain forest conservation.

More than any other group of animals, bats are inextricably linked to rain forest conservation, one of today’s most urgent environmental issues. For years, however, bats have been ignored as a component in planning for rain forest management or preservation efforts. To maintain healthy tropical forests and to preserve diversity, bats must be considered. But to accomplish that, we need to know a great deal more about bat-plant interactions, and we need to solve bat-human conflicts, such as the vampire-control problem.
In the years ahead, BCI will focus on specific problem solving and in reaching key groups, from public health and pest control personnel to cave explorers, tropical fruit growers, and Latin American cattle ranchers. Such groups have a major affect on bat survival, and new and innovative training programs and educational materials must be developed to help find solutions to the particular problems they face.

Over the past decade, BCI has had dramatic impact in highlighting the importance of bats and their conservation needs through the media, and increasingly through our own educational programs and materials. Inspiring future generations to action and conservation awareness, and training new conservationists from grade school to graduate school is a growing priority. To achieve these goals, we must obtain much more information, and this will require greatly increased support of graduate training and research.

Only a few graduate and undergraduate programs provide opportunities for the study of bats, and none specifically address conservation, problem-solving, or education. A primary focus for BCI in the coming decade will be to fill this critical need.

Bat Conservation International and Texas A&M University will be collaborating in a unique partnership to establish the International Bat Research and Education Center. Texas A&M University in College Station is one of the top 10 research institutions in the United States, with a reputation for taking a practical, problem-solving approach to the many fields of study it offers.

The partnership will be the first of its kind, combining the scientific and educational strengths of both organizations. It will also create the first program ever to focus bat research efforts directly on practical management, conservation, and education needs.

Not many conservation organizations have all the resources needed to undertake long-term, multi-disciplinary projects, and most universities do not have the networking abilities of a conservation group. The partnership offers an exceptional opportunity for both BCI and A&M to accomplish what neither could alone. Working together, BCI, university scientists, and students will be able to design applied research projects to solve some of the more serious bat conservation and human conflict problems.

“There is a critical need for well-trained conservation biologists who appreciate the complexity of economic factors and human dimensions involved with wise resource use,” says Dr. David Schmidly, professor and head of A&M’s Department of Wildlife and Fisheries Sciences. “We are suffering today from a shortage of leadership in conservation-relevant fields and understanding of the nuances of addressing issues at the local level. The partnership represents an optimistic new approach toward establishing a model education, research, and intern program to train biologists for careers in conservation, offering the kind of practical training that just can’t be duplicated in a classroom alone. This project is the highest priority for the Department of Wildlife and Fisheries Sciences.”

A capital gifts campaign is currently underway to fully endow The International Bat Research and Education Center. The project also calls for construction of a research facility for specialized studies in bat biology and conservation. Graduate scholarships and fellowships will attract future scientists to study at the center, and undergraduate internships will give young students a start on their careers in bat research and conservation. Endowed research and education funds will also be available for postdoctoral and visiting scholars, including conservationists and wildlife managers from developing countries where bats are often in need of immediate attention.

Students will be given a strong foundation in traditional biology and science, but they will also learn how to apply the knowledge to solve global conservation and environmental problems as they relate to bats. An early priority of the Center will be to address vampire bat control.

The BCI/Texas A&M partnership will mark a new era in conservation and research: cooperation between a private conservation organization and a major university to accomplish mutual goals. The International Bat Research and Education Center will provide an unprecedented opportunity for future biologists to apply their knowledge. With the urgency and complexity of today’s conservation issues, such partnerships may be the only practical means of solving many of the problems we face. 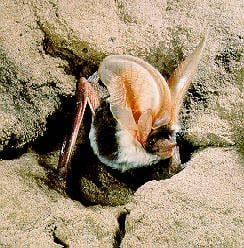 So little is known about the life history of North America’s spectacular spotted bat that we can only speculate on its preferred habitat and status. 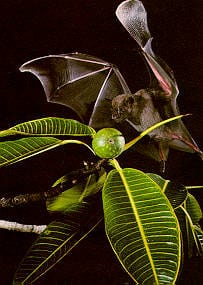