An avalanche of correspondence and memberships were the result of author and BCI member Diane Ackerman’s provocative article about Merlin Tuttle and Bat Conservation International in the February 29, 1988 issue of The New Yorker. Supported by the generous assistance of Bacardi Imports, Inc., a series of advertisements about BCI ran in subsequent issues of the magazine, remarkably doubling BCI’s membership in just three months.

Many of the new members admitted to having an irrational fear about bats until they read Ackerman’s article. Still others proclaimed they had loved bats all of their lives and were thrilled to learn of an organization dedicated to their preservation.

Bat Conservation International extends its sincere thanks to Diane Ackerman for her insightful article and to Bacardi Imports for their financial assistance and guidance in the development and placement of advertising. We also thank Bacardi’s recently retired President and Chief Executive Officer, Bill Walker, who continues to serve as a BCI trustee, and Diane Galarza, the Senior Vice President and Accounts Supervisor for McCaffrey and McCall, Inc. The highly successful New Yorker ad was their personal design.

The New Yorker
Back Issues
25 West 43rd Street
New York, NY 10036
(Be sure to specify magazine date when ordering) 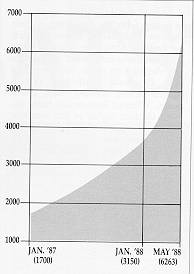 BCI Membership has more than tripled since the beginning of last year.