Bat-dependent plants are of special interest to New York Botanical Garden scientists, Dr. Scott Mori and BCI Board member, John Mitchell. Mori and Mitchell have been conducting a long-term study in the rain forests surrounding Saul, a remote settlement of French Guiana in northeastern South America. They often observed bats visiting flowers and feeding on fruits, and in order to learn more about the interactions of bats with their study plants, they invited BCI Science Directors, Drs. Merlin Tuttle and Paul Robertson, to join them this past August for three weeks of cooperative studies at Saul.

Field work focused on investigating the impact of bat seed dispersal on rain forest regeneration. Two Yale graduate students, Nina Marshall and John Rombold, also joined the group, conducting a pilot study of an abundant second growth bush, Solanum rugosom, a member of the tomato family. Preliminary results indicate that bats are its primary seed dispersers. Their observations, those of Drs. Tuttle and Robertson, and the previous botanical work of their collaborators, suggest that this and other bat-dependent plants are crucial to rain forest regeneration in the area’s abandoned clearings.

In addition to a forthcoming scientific paper on bat seed dispersal, the project resulted in 3,000 new photographs of some 35 bat species, many showing for the first time, details of bat seed dispersal and the impact of bat-dependent plants as “pioneer species”. Several of the bats were extremely rare, and many had never before been photographically documented. The collaboration between botanists and bat biologists was highly successful, and we hope to obtain funds to support additional efforts, in which BCI and The New York Botanical Garden can jointly sponsor in-depth graduate research on bat/plant interactions, essential to an understanding of rain forest preservation. 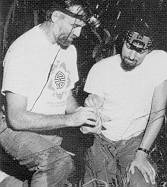