Learn the facts behind the stories, how they harm bats, and how you can help.

For years, we have read articles like the one featured in the December 5, 1998, issue of New Scientist, titled “Bats Out of Hell.” The four-page story states that bats “carry diseases that are proven killers,” highlighting a supposed link to the Ebola virus. To the general public, it all sounds very scary, and typically, these hypotheses become fact in the public mind long before scientists can test them. In this case, in its October 23, 1999, issue the New Scientist ran a four paragraph update admitting that “researchers hunting for the source of the Ebola virus have been looking in the wrong place.” They concluded that ground-dwelling mammals, not bats, are now the prime suspects.

Such examples of hypotheses being blown into scary headlines that drive public fears, and ultimately policy, have become so common that in its July 11, 1996, issue, the prestigious journal, Nature, warned that “The intrinsic conflict between the mandated need to inform the public of potential health hazards and the need of the media for sensational headlines is threatening to compromise the scientific process.” The warning was a response to exaggerated stories about bats and rabies. The recommended solution was “concerted efforts to inform the public about relative risks,” exactly what BCI is so diligently attempting to accomplish.

Unfortunately, despite these warnings, and BCI’s efforts to set the record straight [BATS, Summer 1999] such stories have only worsened. In recent months, leading newspapers, medical publications, and even a children’s magazine have published greatly exaggerated warnings that bats are the primary source of human rabies in America, that bites can easily occur without being noticed, and that medical advice should be sought immediately if one has been near a bat. The September 29, 2000, issue of The New York Times, in addition to repeating these scary warnings, noted that individual New York families are now paying up to $5,000 or more to rid their premises of bats.

Here are the facts about rabies. Worldwide, approximately 99 percent of human cases come from dogs. However, following highly successful control of dog rabies in America, bats now account for some 75 percent of remaining human rabies cases, which are extremely rare. In fact, rabies is now the rarest reported human disease in America. In the U.S. and Canada (since 1980), the odds of contracting rabies from a bat are less than one in 240 million, with just 1.2 human cases reported per year. This does not mean that ongoing pet vaccination programs, public education regarding the potential risk of animal bites or research on rabies and related viruses is not justified. However, it is unfortunate that fears of budget cuts appear to have triggered a relentless media campaign that far exceeds actual public health needs.

Are claims that bats are aggressive, and that undetected bat bites are an important source of human rabies, justified? Some 250 bat researchers from the United States, Canada and Mexico say no. On October 30, 1999, at the 29th Annual North American Symposium on Bat Research, participants voted unanimously in support of a resolution stating that they find no credible support for the hypothesis that undetected bites by bats are a significant factor in transmitting rabies to humans… In our collective experience, bats seldom are aggressive, even when sick, and humans typically feel and recognize any bites they receive…The undetected bite hypothesis is not supported by evidence, and it should not drive public policy nor public health responses. We recognize the need for reasonable precautions against rabies, including vaccination of all who handle bats professionally, and public education that: 1) cautions never to handle bats or other animals; 2) warns to seek immediate medical evaluation of any actual or suspected animal bite; and 3) places risks in perspective with values. (Full resolution available at www.batcon.org. Also, see “Bat Researchers Dispute Rabies Policy” in Science, 287:2392.)

Greatly abbreviated accounts in the Centers for Disease Control and Prevention’s (CDC) Morbidity and Mortality Weekly Reports form the basis for the scariest allegations against bats. A substantial amount of evidence on rabies exposure histories is often condensed to the point of becoming highly misleading. For example, the January 16, 1998, issue carries an editorial note stating that, “Of the 21 cases of human rabies reported since 1980 that were caused by bat-associated rabies virus variants, only one had a definite history of a bat bite.”

The word “definite” is used only when a coherent patient reports a bite directly to a medical professional. Because a large proportion of cases are not diagnosed until the patient is either dead or too sick to be interviewed, they are listed as having “no definite bite history,” despite the fact that families and friends often report bites or probable bites that simply were not treated. For example, a child listed as having “no definite bite” told her parents that she was bitten, but they did not believe her. Vaccination would have protected her. Additional confusion comes from the fact that there is no standardized approach to interviewing families and friends. Thus, reports often are vague or even conflicting.

Very few rabies cases have truly unsuspected exposure histories. However, by reporting only “definite” versus “no definite” bite histories, readers are left to assume that bats are transmitting rabies, either without contact, or through bites that people are unable to recognize. Not surprisingly, this leads to scary media headlines about undetected bites in the middle of the night, not to mention claims of transmission by merely breathing the air near a bat.

The CDC policy (that over the past 40 years, proved highly effective in reducing rabies to the rarest reported disease in America), was changed in 1996, dictated by the unsubstantiated hypothesis that undetected bat bites are an important source of human rabies. The previous policy simply advised pre-exposure vaccination of all dogs and cats and post-exposure vaccination of any humans bitten, suspected of having been bitten, or having had an open wound or mucous membrane contaminated with nervous tissue or saliva from a rabid or potentially rabid animal. The new policy additionally states that post-exposure vaccinations should be considered whenever a sleeping, intoxicated, or otherwise incapacitated person is found with a bat nearby if a bite cannot be ruled out.

Problems arise, because medical professionals are not trained to understand unusual bat behavior or bites, and they are bombarded with warnings implying that bats often bite without detection—even those that appear to be just flying by. Millions of Americans have bats fly near them each summer night without incident, and bat-watching is becoming an increasingly popular family activity. If such bats were rabid, and were biting people without detection, rabies could not remain rare. Nevertheless, as a result of current confusion, in many instances, medical practitioners are left with no alternative but to treat anyone who reports having been near a bat.

Dr. Stewart Updike, a professor of medicine at the University of Wisconsin Medical School, and the physician in attendance when 52 boys were vaccinated against rabies because bats flew through their cabins in 1998 [BATS, Summer 1999], provided very specific suggestions to the Advisory Committee on Immunization Practices that would have clarified the CDC policy for physicians. Unfortunately, his suggestions remain unimplemented, though they could have prevented many unnecessary vaccinations which have diverted millions of public health dollars away from much more urgent health care needs.

Dr. Brendan Brady, Chairman of the Board for Finger Lakes Community Care in New York, investigated costs of the new policy in Ontario County, where he had access to the data. He found a staggering 398 percent jump in rabies vaccinations due to bats, from 46 in 1996 to 183 in 1998, despite no increase in the incidence of rabies. Of people treated in 1998, 125 were vaccinated due to bat “fly by” incidents at an average cost of $2,000 per person! Extrapolation statewide from this average-sized county suggests a total cost of over $19 million, just for this one state.

Dr. Brady noted that his county has a multitude of health-related problems that are far more deserving of such funds.

“Our rate of breast cancer is above average. There is a shortage of primary care physicians. Insurance rates continue to rise. Yet, in the face of these important issues, State Department of Health policies are causing a whopping $1 million to be spent locally every three years on a disease that has never struck a resident of Ontario County: rabies contracted from bats. As a physician who is asked daily to make difficult decisions on the expenditure of limited health care resources, I am outraged that the Health Department policy is wasting millions to prevent the rarest disease in New York.”

Even if we had unlimited dollars, it is doubtful that spending millions on a disease that kills one person statewide per generation could improve the public health. But we don’t have unlimited resources. There are countless true epidemics such as breast cancer that demand these resources.

During the most recent Annual North American Symposium on Bat Research, concerned bat researchers met with representatives from the Rabies Section at the CDC, requesting that future rabies case footnotes in Morbidity and Mortality Weekly Reports be drafted to fully reflect available evidence, or at least be clarified to avoid misinterpretation.

Further meetings between CDC Rabies Section staff and concerned bat researchers are anticipated in coming months, the goal being to jointly identify means whereby misinterpretations of either data or policies can be minimized. We agree with CDC staff that a substantial proportion of the few rabies cases that occur in America could be prevented if people better understood the need to regard any animal bite as a potential rabies exposure, worthy of medical evaluation, including immediate testing of the offending animal.

Prompt resolution of these issues is essential, not only to helping people learn to live with the minimal risk of sharing their neighborhoods with bats, but also to redirecting limited public health resources now wasted on thousands of unwarranted but costly vaccinations.

Dr. Merlin D. Tuttle has studied bats for more than 40 years and is founder and executive director of BCI.

Mexican free-tailed bats (Tadarida brasiliensis) feed exclusively on insects, many of which are costly pests. The renowned Bracken Cave colony of Mexican free-tails consumes over 200 tons of insects nightly. 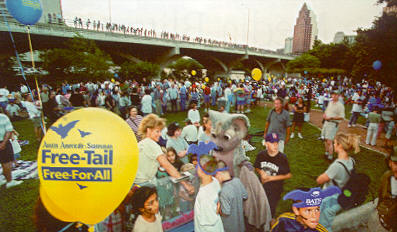 In June 2000, BCI, the Austin American-Statesman and the Austin Children’s Museum hosted the third annual “Free-tail Free-for-All” at the Congress Avenue bridge. Nearly 3,000 children and adults, tourists and local residents, celebrated the bat colony, secure in the knowledge that bats are not sneaking around biting humans, as has been implied so often in recent public health warnings. 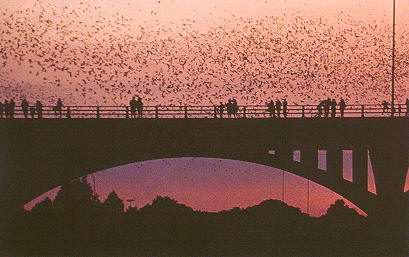 In Austin, Texas, approximately 1.5 million Mexican free-tailed bats live downtown under the Congress Avenue bridge. Their evening emergences have been closely viewed by hundreds of thousands of tourists from all over the world for more than 15 years, yet no one has been harmed. 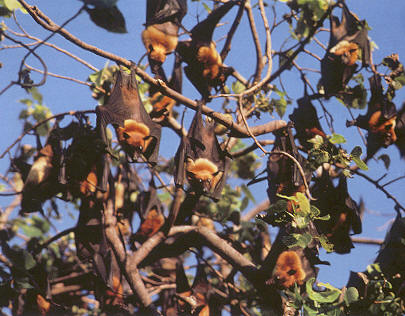 Throughout large areas of Asia and Australia, already threatened and rapidly declining flying foxes are now at even greater risk from human intolerance and eradication due to recent headline stories implying that they carry deadly viruses. Most recently, they are the speculated source of Nipa virus. (See The New York Times story, “Killer Virus Is Linked to Asian Flying Foxes,” in the August 15, 2000, issue.) The fact that rare individual flying foxes have antibodies to this virus, or even may succumb to it, cannot be extrapolated as strong evidence that these bats are an important source of the virus for pigs. As in the already retracted hypothesis that bats were the source of the related Ebola virus, a wide variety of other animals, such as rodents, are far more likely to come into contact with pigs.