Latest on Bats & COVID-19
Home News Bats Magazine Volume 14, Issue 2 The Masters of the Night Exhibit: A Winner for Bats

It’s possible that the rest of the world is beginning to realize what we bat lovers have known for years–that bats are important animals worth learning about. The traveling exhibit, "Masters of the Night: The True Story of Bats," is attracting record-breaking crowds and widespread media attention in every city it visits throughout the United States, Canada, and Mexico. For the first time ever, literally millions of people are receiving, and appreciating, a positive message about bats.

It may be a while yet before we see bat lunchboxes and T-shirts at every store, but already BCI believes that the shift in public attitude has been tremendous. Founder Merlin Tuttle may have summed it up best when he gave a presentation two years ago at the Texas premiere of "Masters":

"When I look back, about ten years ago, the idea of an exhibit like this would have been inconceivable. There’s not a museum in the country that would have wanted it. Nobody would have funded it. Few people would have attended–dead idea. I’m certain that, at that time, we could have raised more money to kill bats than to save them."

The idea is far from dead now, and the people who have already visited the exhibit are living proof. Since its opening in 1993, "Masters" has been outselling other blockbuster exhibits, such as the high-tech dinosaur show, "Dinomation," at museums across North America. With the exhibit being featured by such venerable American institutions as Chicago’s Field Museum and Philadelphia’s Franklin Institute, it’s clear that bats have arrived. A quarter of a million people visited the exhibit during its stay at the Field Museum, leading staff to call it the best, most popular traveling show they had hosted in years.

"Masters of the Night" is a large, impressive exhibit. It takes five, 40-foot-long tractor trailers to transport the components and requires at least five days to install at each new venue. Covering more than 5,000 square feet, it includes a variety of special effects, a shortened version of BCI’s Secret World of Bats movie, and interactive and multisensory displays, as well as live bats.

The show’s creator, Stacy Bishkin of BBH Exhibits in San Antonio, Texas, approached Merlin Tuttle with the idea in 1992. An exhibit devoted exclusively to bats, of the size and scope that she envisioned, had never been attempted. Tuttle readily agreed to serve as scientific consultant, providing basic ideas, information, photographs, and BCI staff assistance.

BBH knew how challenging it would be to persuade a highly skeptical and fearful public that bats are interesting and valuable animals. But their success is apparent anytime you walk through the exhibit. Visitors exclaim, "Is that a real bat!?" over and over again as they encounter replicas "roosting" in trees and caves, under the eaves of a house, and in the crevices of a bridge. Children and adults alike enthusiastically experiment with the concept of echolocation by shouting into two cave chambers; the time it takes for the echoes to return tells them which cave is larger. Several visitors at once crowd into the trunk of a hollow tree replica and beam flashlights onto clusters of roosting bats. There are even "hanging bars" installed in one area for those who want to get a bat’s-eye view of things. And if anyone wants to hear like a bat, they can just try on the pair of oversized, electronic, bat-shaped ears.

One section of the exhibit is set up like a mock museum curator’s office, complete with a desk, file cabinet, bronze "bat busts" of several bat species, and a comparison of human and bat skeletons. Nearly every visitor expresses amazement at the similarities between the enlarged bat skeleton and that of a life-sized human. And hands of every size eagerly touch the bat busts, marveling at the unique and varied features of bat’s heads. Another popular addition to this section is a large, robotic flying fox mother with her pup. The robot bat moves its head and wings in such a lifelike manner that passers-by must take long looks to convince themselves it’s not real.

At most venues, guests do get the pleasure of seeing real bats. The live fruit bat enclosure is especially surprising when the show is at a museum, where no one expects to see live animals. After learning interesting facts in other areas of the exhibit, people often return to study the bats as they eat, groom, and fly. At the Witte Museum in San Antonio, a number of lucky visitors even got to witness the birth of a bat pup.

"Masters" is every bit as informative as it is fun. Staff at the Field Museum point to it as an ideal example of the blending of education and entertainment. When the Fort Worth Zoo hosted the exhibit this past spring, they added a "Jeopardy" style game show and invited visitors to participate. Host "Alex Fruitbat" quizzed the audience on bat facts and was overwhelmed with answers from surprisingly well-informed participants. Visitors clearly had learned quite a lot about bats. At most venues, museum guests are invited to learn more at scheduled lectures, classes, and workshops. The Fort Worth Zoo even hosted a "batty slumber party," in which children spent the night at the zoo observing animals’ nocturnal habits.

"Masters" is already booked well into 1999. The Spanish-language version, "Amos de la Noche," is on its third stop in Mexico, and a European version of the exhibit is also being produced. In addition, this fall a more compact model will begin touring to smaller facilities and towns that can’t accommodate the original, larger exhibit.

In every city it has visited, "Masters" has been featured by the major media; in addition, stories have appeared in national publications such as the Christian Science Monitor, Wall Street Journal, USA TODAY, and National Geographic World. The exhibit also has been the subject of news features carried on the Prodigy computer information network and on CNN’s "Headline News." The extremely positive nature of the media coverage is especially encouraging since, in the past, news accounts about bats have typically been negative and heavily sensationalized.

Interest in bats is definitely at an all-time high, and so we have reason to hope that ignorance about bats will soon be at an all-time low. Will "Masters of the Night" permanently change bats’ negative image, elevating them to the hallowed ground of glamorous animals like dinosaurs, pandas, and whales? We’ll tell you when we see the first bat lunchbox. 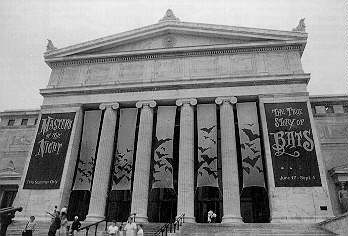 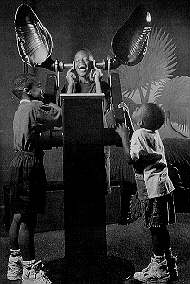 Many of the "Masters" displays focus on specific bat attributes. These electronic ears let visitors experience a bat’s sensitive hearing. 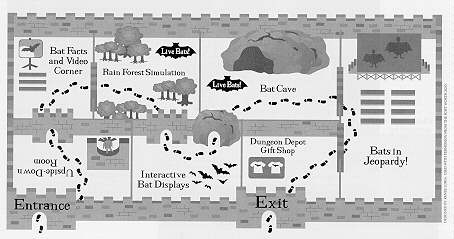 This map shows the exhibit as it appeared at the Fort Worth Zoo, including their unique "Bats in Jeopardy" quiz show. 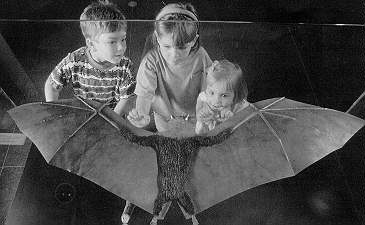 Children are intrigued by detailed bat models in the exhibit’s mock curator’s office. The models help illustrate the diversity of features among different bat species.