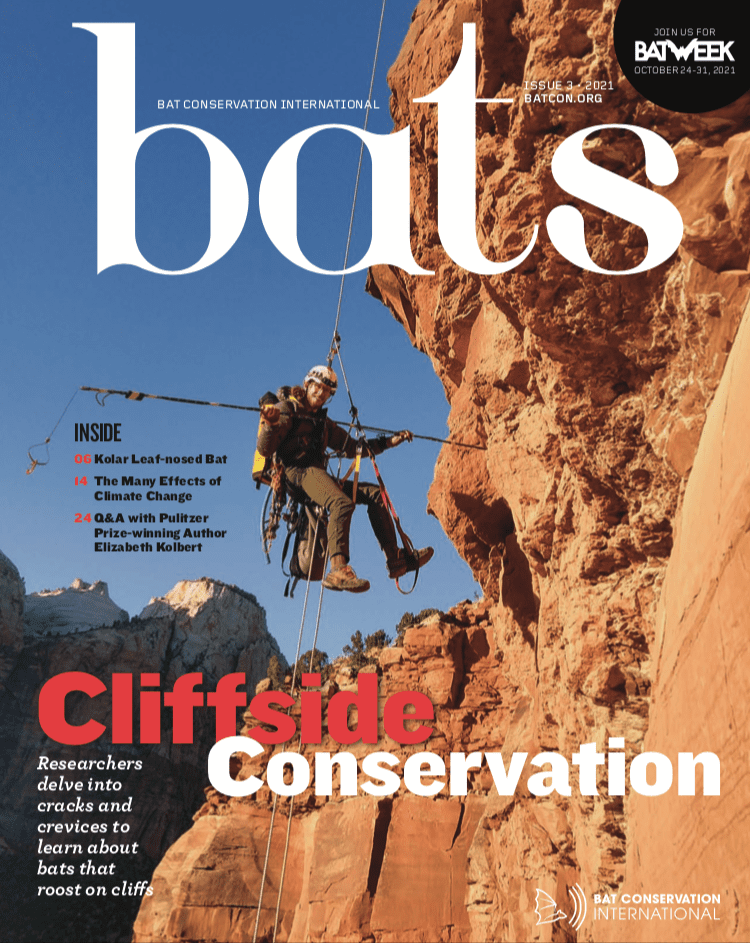 To save bats in a warming world, conservationists look to sustainable water and food sources

Just a few years ago, conserving bat roosts in caves and abandoned mines was considered a fairly straightforward task. Conservationists would put up a bat gate that allowed bats to continue flying in and out but prevented people and other intruders from disturbing the roosts.

But in order to protect bats, conservationists are now considering the world the bats encounter once they leave their homes—a landscape increasingly reshaped by climate change.

In many cases, the biggest issues facing bats are food and water—either too much water due to floods, or too little during droughts. Particularly in the American West, after decades of water shortages and land degradation, climate change can affect the day-to-day lives—and, ultimately, the survival—of bats.

“We’ve really almost fundamentally changed how we approach bat conservation,” says Kevin Pierson, Bat Conservation International Chief of Conservation and Global Strategy. “We still look at protecting the cave itself, but we have to look out five miles, 10 miles, 25 miles to make sure there’s adequate water and forage, and we have to look at the potential effects of climate change.”

In the past few years, more evidence has emerged that climate change is affecting bats’ lives; not in the future, but now. In arid environments, for instance, “we’re seeing whole areas completely devoid of water,” Pierson says. “Some of our remedies are more immediate now because there’s no water, and so it doesn’t matter what’s going to happen in five, 10, 15 years—this colony is going to perish next year without action.”

In response, Bat Conservation International is widening its scope to restore bats’ habitats, particularly streams, ponds, and waterways that serve as water sources. Scientists are also looking at the ways migration patterns and roosting behaviors may be affected as the globe warms.

“Each year, we’re seeing that things are getting hotter and they’re getting drier,” says Jason Corbett, Director of Bat Conservation International’s Habitat Protection and Restoration Program. “Storms, when they do show up, are becoming more intense,” he says, noting droughts persist, wildfires rage, and waterways dry up.

A lack of water isn’t only dangerous for individual bats, which can lose up to 30% of their body weight due to evaporative water loss within a 24-hour period. It also makes it very difficult for them to reproduce since reproductive-age female bats need up to 13 times more water than males.

“Insectivorous bats, due to their physiology, have an extremely high demand for water,” Corbett says. “In arid and semi-arid environments like the western and southwestern U.S., they need to essentially drink every night. Being able to find that food and water on the landscape can be a challenge.”

During restoration work, Bat Conservation International first identifies at-risk roosts with limited water sources nearby, and then locates potential projects, like ponds, springs, and streams, within five miles of the roost sites. The closer the better, so bats don’t waste valuable energy searching for water.

Once environmental clearance to restore the area has been granted, invasive species are removed. A digger will overturn the earth, long trampled and compacted into dry blocks, to make it more absorbent. Native plants are reintroduced and monitored carefully, creating homes for insects, frogs, and other animals.

Soon, a small oasis awaits bats, with not only water but also insects and plants for forage.

These restoration programs help entire ecosystems persist, in addition to helping bats stay hydrated and fed. “Many of these spring sites in the western and southwestern U.S. are home to rare endangered plants because those ecosystems can be very small, very specialized, and also very fragile,” Corbett says. “There are a lot of benefits from that kind of work.”

Agencies like the U.S. Bureau of Land Management have been key partners in this work, along with local ranchers. “Working with ranchers is a key and critical component to this,” Corbett says.

Livestock tanks, which provide water for cattle or horses, can be another important source of water for bats. Over the past few years, and especially now, many human-made water sources have run dry. Bat Conservation International works with ranchers to restore ponds and livestock tanks, making sure water is diverted into the pond efficiently, renewing compacted soil, and removing invasive plants. It’s often easier to rehabilitate a human-made pond, since it’s less ecologically sensitive.

“It’s a win-win,” Corbett says. “We’re actually rehabbing and getting, in a lot of cases, better flow of water back for livestock use, while at the same time rehabbing the site to encourage and allow greater use by wildlife.”

The threat of fire

Water isn’t the only factor affecting bats’ survival. In a changing climate, wildfires are becoming more common and intense. When they sweep the landscape, they burn some of the ecosystems bats depend on—including agaves.

“These agaves are the sole nectar source during the flowering season of agaves for these two different species of bats,” she says.

“In these grassland systems where agaves are really abundant—especially Palmer’s Agave—we see that the agave populations are doing fine after low-severity surface fires,” Poulos says. “So, that’s actually a bit of good news.”

Agave restoration, like the work Bat Conservation International leads, also helps make agave populations more resilient in a changing world, she says. Restoration means “there are plenty of plants out there that are growing that can support these species,” even in the face of growing environmental stressors, she says.

Bat Conservation International scientists are also looking at the big picture, tracking research on the potentially dramatic shifts in bats’ ranges. “We have to think about where we actually do conservation,” Pierson says. In Mexico, for instance, Pierson and colleagues are focusing on protecting roosts along the sides of mountain ranges.

“The bats and their migratory ranges are going to shift,” Pierson says, noting restoration efforts make the greatest impact when they are focused on areas that bats will continue using as habitat over the long term.

Addressing climate change will continue to be a key part of conservation work—and staying flexible and inventive will be important for success. “It is no longer good enough to simply protect roosts,” Corbett says. “There’s no time to waste.”

Ranchers and other people living alongside bats play a big part in large and small restoration projects. For instance, farmers can make modifications to water troughs that help bats. This can be as simple as adding an escape route for bats that swoop over the trough for a sip of water and get stuck in the narrow enclosure. “Have a little ramp that the bat can get out of,” suggests Kevin Pierson, Bat Conservation International’s Chief of Conservation and Global Strategy. When it comes to bat conservation, even the smallest action can help. Often, Pierson says, it’s “just a realization that you can do something.”

What White-nose Syndrome Taught Us About Vulnerability

One of the greatest threats bats face in a changing climate are increasingly unpredictable weather patterns. For eons, bats have counted on certain patterns in their environment that are now rapidly changing. “It’s going to be a challenge for a lot of our bats,” says Kevin Pierson, Bat Conservation International’s Chief of Conservation and Global Strategy.

Hibernating bats in particular need very precise conditions in order to maintain enough energy resources. That’s why White-nose Syndrome has been so devastating—because it causes bats to waste valuable energy reserves during hibernation. “It’s a lethal situation, so climate is just a larger version of that. And then the world that they emerge into, which has been the same for hundreds and hundreds of years, is potentially different. That’s a stressor,” Pierson says.

Creating and restoring bat habitats—helping bats drink and eat enough to survive hibernation—could be a major way to make them stronger in the face of vulnerability.