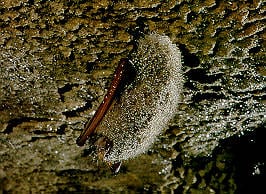 The color and texture of a cave ceiling provides the perfect camouflage for a hibernating eastern pipistrelle (Pipistrellus subflavus), glistening with condensed moisture. Found throughout much of the eastern United States, these bats prefer to hibernate individually, unlike many other North American species who tend to form dense clusters. A hibernating pipistrelle may remain in a single position for weeks. As the temperature fluctuates, it may move to another location within the cave. Year after year, the same individual often returns to the same favored spots. Repeated disturbance of hibernating bats causes the death of many each year as they expend their fat reserves by awakening and moving unnecessarily.