Strong, tough, and beautiful, the hoary bat stands out among American bat species for its unusual adaptability . . .

Ever heard of a hissing tree trunk? I hadn’t either until one day while climbing in the foothills above Bakersfield, California. I was just nine years old, and was amazed to hear intense hissing sounds that seemed to emanate from an otherwise normal tree trunk. When I recovered from my first startled reactions, I discovered that part of the rough bark was actually an almost perfectly concealed hoary bat (Lasiurus cinereus). I have since had a lifelong fascination for this beautiful but seldom-seen species.

The hoary bat is one of North America’s most recognizable and striking bats. Its large size and rich coloring easily distinguish it from all other species. It is also unique in having the widest range of any North American bat–from Argentina and Chile all the way to northern Canada. Stray migrants have even been discovered in Bermuda, Iceland, and Scotland’s Orkney Islands. In fact, due to their amazing flight capabilities, hoary bats are the only land mammals to have reached Hawaii.

Given their expansive range, it is no surprise that hoary bats also occupy the widest variety of habitats of any New World bat. They are found everywhere from lowland deserts to tropical cloud forests and northern tundra. In the United States, they live in the pine-hardwood forests of the East and in arid deserts and ponderosa pine forests of the West. They are most abundant, however, on the edges of croplands and deciduous forests of the Plains States and in coniferous forests of the Pacific Northwest. In Manitoba, Canada, hoary bats are abundant in deciduous forests along ridges surrounded by wet meadows, marshes, and bays. The Hawaiian subspecies is also highly adaptable to different habitats. It has been recorded in both wet and dry areas, from sea level to heights of more than 13,000 feet.

Unlike little and big brown bats (Myotis lucifugus and Eptesicus fuscus) and other species that frequently roost in buildings, hoary bats are seldom found in urban settings. They have sometimes been spotted hunting at night in the glow of streetlights, especially in country parks, but during the day they carefully hide themselves. Mothers with young roost in foliage along forest edges or in fencerows, generally 12 to 40 feet above ground. In a study in Iowa, these bats were most often found in fencerows between crops, protected by dense vegetation above with unobstructed space below. These features undoubtedly aid them in escaping from a variety of birds and other predators.

Hoary bats live alone except during fall migration and when mothers are accompanied by their young. Although both sexes sometimes spend summers in the same general regions, males are normally scarce in areas where mothers raise their pups. In North America, these areas are primarily in the midwestern United States and north into Manitoba, Canada. A few rear young in eastern forests as far south as Arkansas, Louisiana, and Tennessee. Females prefer low elevations, while males are more often found in mountainous areas, particularly from West Texas through Arizona, and northward through at least Oregon. At BCI’s workshops in the mountains of southeastern Arizona, we net more than a hundred hoary bats each summer. Nearly all are males, and they never fail to elicit “oohs” and “ahs” from participants who see them for the first time.

Fall migration is one of the rare times when hoary bats form groups larger than mother-young family units. At this time, both sexes travel together, often in groups of hundreds, migrating some of the longest distances of any bat. In the United States, their primary destinations are the mild, coastal areas–in the West from San Francisco south along the California coast, and in the East from South Carolina to central Florida. They also overwinter in all the states along the Gulf of Mexico and in northern Mexico.

Hoary bats are the only bats known to hibernate out in the open. Several have been found on tree trunks, and at least one each has been spotted in a woodpecker hole, a squirrel’s nest, and a clump of Spanish moss. Naturalist Charles Rau observed one for a month as it hibernated several feet above ground on the trunk of an Apache pine (Pinus engelmannii) in the Chiricahua Mountains of southeastern Arizona. It survived a snowstorm and temperatures as low as 7 degrees Fahrenheit. The hoary’s nearest relative, the red bat (Lasiurus borealis), is known to withstand body temperatures as low as 23 degrees Fahrenheit. Like red bats, hoary bats wrap up in their extra large, densely furred tail membranes to stay warm, raising heart rates as temperatures fall below 23 degrees.

Although no one has seen hoary bats mate, we suspect that, like red bats, they mate in flight, in late summer or early fall, with male and female flying in tandem. The sperm are apparently stored in the female until she ovulates in the spring. Female hoary bats are pregnant when they begin their northward migration in spring. They precede the males, moving through lowland areas and coastal valleys, while most males travel through foothills and mountains.

Mothers give birth, typically to twins, between mid-May and late June. Although most bat species bear just one pup a year, hoary bat females have two pairs of breasts and sometimes rear as many as three or four pups in a litter. During birthing, the mothers firmly anchor themselves in horizontal positions, hanging by their thumbs and feet and curling their tail membranes over the vaginal opening. They resume normal hanging postures soon after giving birth and cradle the babies beneath their wings. Within minutes, mothers begin grooming their young and continue until the pups are clean and dry about eight to ten minutes later. The placenta remains attached for up to 90 minutes, protecting babies from potential falls. One researcher observed a baby that fell but was saved by its umbilical cord, which it used to climb back to its mother.

Babies are hairless at birth except for a few patches of fine, silvery-gray fur. They begin to make high-pitched chirps on the second day, and on the third day their eyes and ears open. Mothers easily carry their young in flight for the first week but do so only to change roosts. Within 22 days the young resemble adults, and they can fly nearly as well as adults in 44 days.

Mothers often travel up to 12 miles to feed and, upon return, must find their well-concealed young in the foliage. They recognize their babies’ calls and communicate with them when reuniting. Pups that fall from the roost give distress calls, and mothers will retrieve them when possible.

Some mother-young family groups change roosts frequently, while others do not. Few move more than 100 yards from a previous roost, probably in many cases to avoid wind. One hoary bat that I observed near Milwaukee, Wisconsin, returned to the same blue spruce branch to rear her young for three consecutive summers.

When food is scarce, hoary bats are highly territorial, guarding favored hunting sites. Other bats are chased away, forewarned by unique, low-frequency chirps. These social sounds are emitted at about 9.8 kHz–well within the range of human hearing–and sometimes are useful in identifying these bats in flight. Because they are substantially lower than the normal echolocation sounds of approximately 15-30 kHz, these sounds carry farther and are well suited to warning other bats to stay away.

In Hawaii, certain moths have adapted to take advantage of hoary bats’ longer-range social calls. By adjusting their hearing downward, the moths can detect bats from farther away, allowing them to take earlier evasive action. Biologist James Fullard discovered that Hawaii’s noctuid moths (the most common family of moth) have developed special hearing sensitivity at 9.8 kHz, and no longer hear much higher than the bat’s 27.9 kHz echolocation frequency. These moths can afford such a low-frequency specialization only because there are no other bat species to avoid in Hawaii. (Most other North American bats rely heavily on higher echolocation signals, often in the 40-45 kHz range.) Many moths that hear an approaching bat try to escape by dropping to the ground or by flying into foliage. Hawaiian hoary bats are fast, tenacious hunters that sometimes pursue moths to within six inches of the ground, making longer-distance hearing quite advantageous.

Moths are the hoary bat’s most common prey. In a single meal, this bat can eat up to 40 percent of its weight— the equivalent of a 150-pound human eating 60 pounds of food. Other common prey include beetles, flies, crickets, stink bugs, and burrower bugs. The Hawaiian hoary bat is known to feed heavily on damp wood termites, which are highly destructive to wooden buildings.

Several researchers have also found hoary bats eating mosquitoes. This practice is probably not typical, though the stomach of one hoary bat in Oregon was found half full of these tiny insects. Since hoary bats rank among the largest and highest flying of North American bats, it is unlikely they would bother to pursue such small and maneuverable insects when larger ones are available. With long, narrow wings, they usually rely on speed rather than agility, hunting relatively large insects in open areas.

Amazingly, despite their high-speed wing adaptations, hoary bats have been known to take off in flight directly from the surface of a pond. While mist netting at BCI workshops, we have seen them bounce off a net, land on the water beneath, and take flight immediately.

Based on reproductive rates, we guess that these bats live for not much more than six or seven years. Mortality during long-distance migration is likely high, especially since there are increasingly more high-rise buildings, radio towers, and other obstacles that the bats may run into while riding tail winds at high speeds during the night. Thunderstorms with high winds are a significant danger for mother hoary bats carrying large but flightless pups. When blown from their roosts, the mothers, burdened by the weight of their young, are sometimes unable to regain flight. Birds and snakes rank among the most important predators of this species, but habitat loss and overuse of insecticides surely pose far greater threats.

Unfortunately, we know almost nothing about the overall status of hoary bats and their long-term population trends. Since they commonly feed upon moths and rear young along hedgerows between midwestern crops, they are probably highly beneficial in agricultural areas. Given that one female moth can lay a thousand eggs, and a typical hoary bat could easily consume 50 or more females per night, the presence of just one bat could mean up to four million fewer caterpillars produced each summer, including such costly pests as corn earworms, cutworms, or armyworms. This bat deserves much more study. It is certainly one of North America’s most fascinating animals, still ranking as one of my alltime favorites.

Merlin D. Tuttle is Founder and Executive Director of BCI. Portions of this article are excerpted from his forthcoming book, Bats of North America, to be published by University of Texas Press. 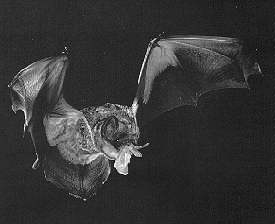 This hoary bat displays one of the species’ more unusual attributes: fur-lined wings. The soft, dense fur also extends to the tip of its tail membrane. 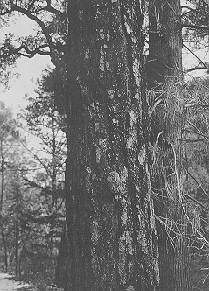 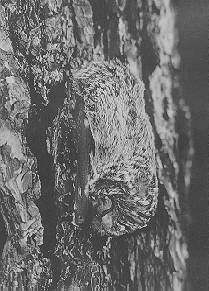 Spending the winter asleep on a tree trunk calls for special camouflage. Predators aren’t likely to notice this bat so perfectly matched to the bark of an Apache pine (opposite page). When viewed close-up (left), it’s easy to see how the hoary bat’s multicolored fur makes it practically invisible. 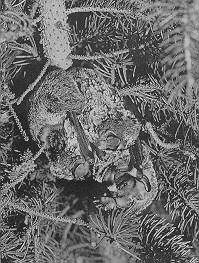 Hoary bat pups cling to their mother throughout the day, but when night comes, she leaves them clutching a twig while she hunts.