The evening emergence of bats at the Eckert James River Bat Cave near Mason, Texas, is one of the most spectacular in the country. Summer home to a nursery colony of approximately four million Mexican free-tailed bats (Tadarida brasiliensis) and 20,000 cave myotis (Myotis velifer), the cave is one of the top 10 North American sites known for free-tails.

Eckert James River Bat Cave was opened to visitors on June 1, 1991 under the joint management of Texas Nature Conservancy and Bat Conservation International, a unique partnership forged when the cave owners donated the property to Texas Nature Conservancy. Since Mason residents had been enjoying the bat flights for years, it was donated with the condition that the traditional public viewing be continued.

In anticipation of greater visitation, management plans were developed to ensure the safety of both bats and people. The most significant aspect of the management plan is education. A site manager was present nightly to answer questions, talk to groups, and establish guidelines for responsible viewing of the bat flight. The more the public learns about bats and their benefits, the more likely people will become involved in their protection. Interpretive signs designed by BCI have also been installed at the site. And through the use of audiovisual and other materials, information about the cave’s bats has spread throughout surrounding communities.

One of the most important aspects of the management program is to monitor trends in bat behavior and population. Nightly observations have provided data against which to assess inadvertent disturbance and the effectiveness of current management practices. Emergence times, along with the corresponding numbers of visitors, were recorded during the active season. Although complex factors are always involved, it is clear that the number of visitors has significant impact on when the bats emerge, accounting for as much as 18 percent of the variation in emergence times.

The data collected during the first season may already suggest a change in policy, although it is still too early to assess the potential affect that public visitation has on the colony. What we have learned from the first year now has led to management decisions to further minimize disturbance to the bats. Public visitation has been cut from nightly to four evenings a week, and the viewing area has been moved farther back from the cave entrance. We will monitor the situation closely in this second season to determine if further changes in management are necessary. Our experiences here will be valuable in developing other public bat-viewing sites and in assisting with new management plans for those already open to the public.
—Donna Hensley, Science Assistant 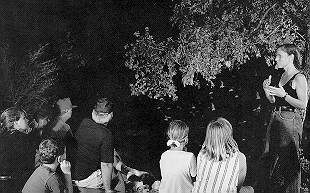 Donna Hensley (right), site manager of the James River Bat Cave last summer, speaks to a group of visitors who have come to see the bat flight.