SURELY ONE OF THE MOST startling discoveries reported about bats last year was that some males can lactate like females, proving once again how little we know about the lives of bats. The lactating males are Dayak fruit bats (Dyacopterus spadiceus), a little-known, small flying fox of Malaysia and Borneo.

Boston University bat biologist Thomas Kunz and Canadian zoologist Charles Francis made the unexpected discovery while conducting bat census studies in a rain forest game reserve in Malaysia. From nets strung high into the forest canopy, they extracted 10 mature male bats and put them into a collecting bag. But when Francis removed one head first, it looked like a female, with its noticeably enlarged nipples. To his great surprise, it was indeed one of the males they had captured; each male had mammary glands, which produced small amounts of milk when squeezed.

Milk production in males has never before been reported in wild animals. Thus far, it has been seen only in some highly inbred domestic animals and human males with tumors, those undergoing hormone treatments, or babies at birth. Even in these instances, it is extremely rare. In the case of Dayak fruit bats, the males have the correct plumbing and physiological capability to lactate, but the scientists don’t yet know what it means. Although the males produced milk, their mammary glands and nipples were not as large as females, and the amount of milk was only about a tenth of that produced by females. Males were not observed nursing young.

The researchers note that if Dayak fruit bats prove to be monogamous, a mating system found in only about three percent of mammal species, their ability to lactate would make sense. Monogamous mammals share in the raising of their young. Only five bat species* are believed to form monogamous pairs, but it is not known whether any males of these species produce milk.

Among the many other speculations on the cause of the phenomenon is that it could also have something to do with the diet of the fruit bats. They eat fruit, but their diets may also include certain leaves as well. Some leaves contain estrogen-like compounds called phytoestrogens, which in turn could stimulate milk production. If this proves to be the case, then the males’ ability to produce milk might serve no functional purpose. The bats may also be stimulated to produce milk if they eat fruit or leaves contaminated with pesticides, since it is well-known that certain breakdown products of pesticides mimic the effects of the female hormone estrogen.

Future investigation into the social lives of these bats will provide some answers. Learning more about the ability of the males to produce milk might also reveal secrets of the complex mechanisms of reproduction in both males and females. Whatever the cause, for now the male Dayak fruit bat appears to be one of a kind.

(Sidebar)
“DISCOVERIES” is a new feature in BATS. We invite the submission of new bat-related research findings that researchers would like to share with the readers of BATS. Just provide a copy of your paper or any other information about your findings, and state availability of photos or illustrations. If we use your material, you will have an opportunity to review what we write. Send your contributions to Mari Houghton, Editor, BCI, P.O. Box 162603, Austin, TX 78716. 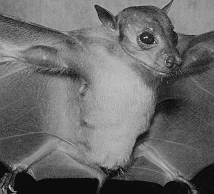 Researchers discovered that the mammary glands of male Dayak fruit bats produced small amounts of milk. This male’s noticeably enlarged nipples can be seen beneath its wings.