In a steep, forested valley in Ku-ring-gai, north of Sydney, Australia, a large colony of grey-headed flying foxes (Pteropus poliocephalus) rear their young in relative peace. The colony is protected, and the valley where they roost, though surrounded by houses, remains urban bushland. Visitors to the reserve come to watch these large bats roosting in the trees and to see them take flight at dusk. But this wasn’t always the case. Until the last few years, most Australians knew nothing about these bats and wanted only to get rid of them.

Over time, increasing loss of natural food sources has led flying foxes to turn to orchards, sometimes even eating green fruit when native trees fail to blossom. But with droughts, erratic flowering seasons, and humans cutting down native forests to build houses or to farm, flying foxes throughout Australia sometimes have had few choices for food. Fruit growers shot them in their orchards and organized shoots to destroy their colonies, treating it as a sport.

As far back as 1931, studies were called for to find a way to prevent flying foxes from damaging cultivated fruit. After three years of research, Dr. Francis Ratcliffe concluded that their diet was primarily nectar, pollen, and rain forest fruits, and “contrary to the general belief, the flying fox is not a serious menace to the commercial fruit industry.” Nevertheless, fruit growers continued to complain about the bats, and in Ku-ring-gai, nearby homeowners objected to having the colony for neighbors.

It was against this background in 1984 that conservationists discovered that the Ku-ring-gai colony, the last remaining near the Sydney metropolitan area, was threatened by sale of the land for building houses. In an effort to save it, concerned conservationists and scientists met with the Ku-ring-gai Municipal Council and the New South Wales state government. This led to an interim conservation order being placed on the land while a report was prepared for the National Parks and Wildlife Service. The fortunate result was that the state and the municipal council jointly purchased the land.

Such bold action created an uproar as the uninformed objected to public money being “wasted on bats.” Ron Yeates, then mayor of Ku-ring-gai, issued an invitation to community groups and interested individuals to attend a meeting. The Ku-ring-gai Bat Colony Committee was formed out of the gathering, and the new group quickly took up the challenge of changing public perception of bats in Sydney.

The committee’s efforts were greatly assisted by Dr. Merlin Tuttle’s 1985 visit to Sydney. With Dr. Dedee Woodside from the Taronga Zoo, he met with Bob Carr, then State Minister for Environment and Planning, convincing him that flying foxes must be protected, not destroyed [BATS, March 1986]. Flying foxes were legally protected in New South Wales early in 1986. No longer could weekend shooters slaughter flying foxes as they roosted peacefully in the trees. Instead, fruit growers had to apply for permits to shoot bats in special cases only. Unfortunately, flying foxes remain unprotected in Queensland.

Tuttle presented the Ku-ring-gai council with Bat Conservation International’s slide program, “Bats: Myth and Reality,” which was then given to the committee. The program helped us convince many people that bats are beneficial and not to be feared. Volunteer speakers, accompanied by a tame flying fox, continue to visit schools and community groups and have persuaded thousands to change their attitudes toward bats.

Once the flying foxes were protected and their habitat at Ku-ring-gai was safe, the committee turned its attention to the state of the trees where the bats roost. Weeds and vines that had spread from surrounding suburban gardens were gradually choking the native forest. Canopy trees were dying, and because no seedlings could germinate to take their place, the entire forest was doomed.

A small, but determined group of volunteers moved into the reserve to tackle the weeds. By cutting vines at head height and methodically removing all growing parts, they relieved small areas of their burden of weeds. Workers planted native tree seedlings, and in the following months, native grasses and herbs germinated and began to spread. It was obvious, however, that a habitat restoration project would need a long-term commitment.

Continuing efforts to gain support for the project paid off at a public exhibit featuring the Ku-ring-gai bat colony. On opening night, Gollum, the friendly flying fox we used for education, had to be restrained from sampling too much champagne, but the evening was a success. Several members of the committee had an opportunity to speak with the Minister for Planning and Environment about the threat that weeds posed to the reserve. The result was that the committee received a four-year grant from the New South Wales Heritage Conservation Fund, which the Ku-ring-gai Municipal Council later matched.

With funding, the Ku-ring-gai Bat Colony Committee has been able to employ a team of trained bush regenerators in addition to enthusiastic volunteers. Since 1987, they have rehabilitated over a hectare of severely degraded forest. Many of the planted trees are now over 16 feet tall, and without the weeds, seeds carried by the bats now germinate. Flying foxes are not yet using the rehabilitated areas, which are still quite open, but it is expected that they will move back as the forest matures.

Conflicts between bats and people are gradually being resolved, though 60 years after Francis Ratcliffe’s flying fox study, many remain to be convinced. Some fruit growers now prefer other solutions to shooting flying foxes and have successfully experimented with netting entire orchards to exclude bats. Although the initial cost is high, over several years it should become cost effective. Using strong nylon netting over orchards also reduces damage from birds, who may do more harm on average than flying foxes. To date, surveys of fruit damage have relied on grower estimates, and data has been collected only in years when flying fox damage has been considered severe. Independent surveys by the Agriculture Department over a period of several years, plus experiments with protective measures, should be initiated.

Positive media attention has definitely helped the bats’ image. Several programs featuring flying foxes were aired last year. One of the most popular was a documentary called “Raising Archie,” the story of a well¬known Australian news broadcaster who hand-reared an orphan flying fox. Viewers responded with comments that they had no idea how important flying foxes were to the ecology of forests or that they were such friendly and gentle animals when treated with consideration. The growing interest in these appealing bats was also indicated last year when 90 people completed a course in flying fox hand-rearing, now required for rehabilitators.

The committee’s continuing efforts to educate the public have led to an increase in visitors to the reserve, which provides additional opportunities to learn about the bats. Educating people will continue to be important for the future of all of Australia’s flying foxes. Through the Ku-ring-gai Flying Fox Reserve, they should be able to see firsthand what wonderful creatures bats really are.
Nancy Pallin is Honorary Secretary of the Ku-ring-gai Bat Colony Committee in Sydney, Australia. 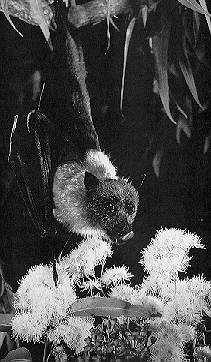 Grey-headed flying foxes are major pollinators for many hardwood trees, including this apple gum tree (Angophora costata) and various kinds of eucalyptus. 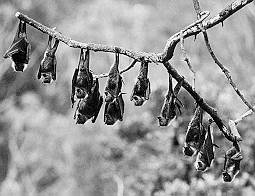 Flying foxes hang like pears in the trees of Ku-ring-gai. This grey-headed flying fox maternity colony is southern Australia’s most important. 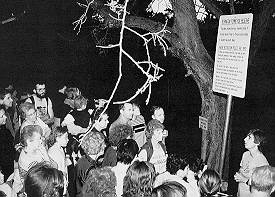 Nancy Pallin (far right) lectures to an evening crowd who have come to see the flying foxes take flight over the tree tops of the Ku-ring-Gai Flying Fox Preserve.