PICTURE THE frozen food display case in your local supermarket. Among the packaged fish sticks and chicken are less mundane items, possibly jumbo shrimp from the Gulf of Mexico. Even though they’re expensive, you might buy some for special occasions, without too much thought about how they got to the store.

Things are much the same in the big, mainland-style supermarkets on Guam, except that among the luxury items, you can sometimes find imported, frozen flying foxes-individually shrink-wrapped in white Styrofoam trays. For the Chamorro people of Guam and the adjacent Commonwealth of the Northern Marianas (CNMI), flying foxes are a traditional delicacy, served at birthdays and other personal and community social gatherings. The bats are expensive and can be hard to find. When news of a shipment circulates, people buy the bats quickly, probably also without giving much thought to the consequences of consuming them.

Unfortunately, when you perturb ecological systems, ignorance is hardly ever bliss. We’ve realized belatedly that the usual shrimp trawling technology is a major cause of serious, virtually global, declines in sea turtle populations. But commercial trade in Pacific flying foxes threatens not only the survival of the bats themselves, but also the island forest communities that depend on them for seed dispersal and pollination.

The flying fox trade has grown steadily since the 1960s when over hunting depleted Guam’s flying fox population, and residents began to import them from surrounding islands. Like the disturbance generated by dropping a stone in a quiet pool, a wave of unregulated wildlife exploitation moved out from Guam in many directions, along jet air travel routes.

Reports by Samoan hunters of increasing scarcity of flying foxes first alerted our colleague, Dr. Paul Cox, to the impact of commercial hunting on those islands’ flying foxes. Since 1987, access to Samoan bats has become limited for a number of reasons, including Samoan restrictions on export of its declining flying foxes.

As a result, trade intensified in Micronesia, particularly Palau, Pohnpei, and Chuuk (formerly known as Truk)-the closest potential suppliers. (The islands nearest Guam, Yap, and the CNMI already had legislation prohibiting commercial har vest.) Trade from these areas has escalated dramatically in the past four years.

The islands of the Pacific are home to many localized species of the flying fox genus Pteropus. In many cases, they are an island’s only native mammal. The geographic ranges of these bat species are typically small — many less than 200 square miles and, in a few instances, less than 10 square miles. Limited distributions mean that, even under optimum conditions, population sizes are small. On islands, there may be little refuge from habitat disturbance or human exploitation, leading to the possibility of rapid population declines.

EXCEPT DURING A BRIEF INTERLUDE when the islands of Micronesia played a key role in World War 11 Pacific campaigns, they have not often been in the public view, and most people outside the region know little about these places. There is a similar, remarkable lack of basic biological data on these islands’ forests and other natural communities. Concern for the status of flying foxes and their habitat, and the need to evaluate the impact of trade, prompted BCI to sponsor a preliminary survey of several island groups.

Thus, BCI member and bat biologist Dr. Elizabeth Pierson and I spent August 1989 in Guam, Chuuk, Pohnpei, and Kosrae. We went to Guam first, where we met with Guam customs officials and members of the Guam Division of Aquatic and Wildlife Resources. Thanks to their staff, particularly Gary Wiles (also a BCI member), over ten years of valuable bat trade statistics are available. And thanks to monitoring by Guam customs, export restrictions by areas such as Yap and Samoa have been implemented. On Guam, we were able to review import records and gather valuable biological data from flying foxes retained from illegal shipments.

Chunk, Pohnpei, and Kosrae are members of the Federated States of Micronesia (FSM); each has at least one species or subspecies of flying fox which occurs only there. These islands differ from both Polynesia and the Marianas in that virtually no bats are consumed locally for food. Residents owning guns reported using flying bats for target practice, but intensive exploitation of flying foxes began only recently with the arrival of hunters and buyers from Guam and ,the CNMI.

CONDUCTING FLYING FOX SURVEYS on island archipelagoes presents several problems. A major one is getting from island to island. Moen Island, the seat of government in Chuuk State, has a jet airport, but the other 15 main islands, and perhaps 80 islets in Chuuk lagoon, are accessible only by boat. In addition, there are more than 100 other islands on atolls in Chuuk State. A round trip to the outer Mortlock Islands, where Pteropus phaeocephalus occurs, might take from ten days to six weeks.

In Chuuk, with the assistance of government personnel, we visited several of the main islands and two islets on the outer reef. Residents, including one exporter, commented that bat numbers were way down. We observed much lower numbers than colleagues had reported in surveys conducted before the recent surge in exports. We were particularly concerned to learn that a buyer had distributed air rifles to prospective hunters in at least part of the Mortlocks and was periodically picking up shipments of bats, along with fishery products, from recently established local refrigeration plants. The total land area of the Mortlocks consists of only a few square miles of low-lying coral island, so regardless of initial flying fox densities, rapid extinction is a real possibility.

Although the island of Pohnpei is larger, the story there was similar. An American Museum expedition to Pohnpei in the 1930s had documented large colonies of its endemic flying fox in coastal mangrove forests. At the best-known site, where a member of the Pohnpei marine resources staff regularly had counted over 1,000 exiting at dusk in the 1960s, we counted only 15 bats. At another mangrove site recommended independently by two hunters we found no bats. A nearby resident told us, with tears in his eyes, that he used to listen to the bats every night, but people had come from Guam and killed them all. He asked us pleadingly, why his government could not do something.

We originally viewed Kosrae, the easternmost state in the Federated States of Micronesia, as a possible "control" site. Guam customs records indicated virtually no trade from Kosrae, and we had hoped that bat populations there would provide a valuable comparison with heavily exploited populations elsewhere in the FSM. But we learned that, despite the absence of appropriate documents, significant numbers of animals were shot and exported to Guam and Saipan. With invaluable assistance from government staff, we were able to observe two colonies, but bats did not appear common. Of the two primary timber trees cut by the local sawmill, one was bat-pollinated and the seeds of the other were most likely bat-dispersed, indicating probable economic consequences of flying fox decline or extinction.
Results of our research on these islands aided CITES delegates in making informed decisions about proposals to restrict international trade in the most heavily exploited flying fox species [BATS, Winter 1989-90]. The new CITES amend ments should help to halt the rapid decimation of flying fox populations on the islands of FSM, allowing time for implementation of longer-term conservation strategies.

ONE OBJECTIVE OF OUR TRIP was to talk with local government officials about their policies regarding flying foxes. Discussions were timely because the FSM, as a recently independent country, is currently formulating natural resource laws. On every island, we found serious interest in more effective wildlife and other natural resource management as well as concern about the depletion of flying fox populations. We were also fortunate to meet with con servation educators on several of these islands. Education is particularly pivotal in the central and eastern FSM, where many people find bats unappealing. Conservation educators and their institutions will be crucial to the development of bat educational projects which will promote the long-term survival of flying foxes and their rain forest habitats.

Our surveys produced results useful in determining the status and conservation needs of the islands’ bats. We also learned that island officials are eager for assistance with the conservation of their flying foxes. Our visit alerted them to the impact of the flying fox trade, but follow-up will be important. Along with additional surveys of flying fox populations and studies on their ecological role, aid with legislation and environmental education are also needed. We look forward to helping meet these needs.

PATAGONIA, INC. has a reputation for quality outdoor products and a commitment to conservation. Thus, it seemed natural for BCI to seek their support for our own efforts. Fortunately, they agreed to help.
In 1989, Patagonia funds contributed to BCI were used to document flying fox population declines and the threats to ecosystems on the Pacific islands of Guam, Truk, Kosrae, Pohnpei, and Fiji. This information has been used successfully to obtain greater protection for flying fox populations and their habitats. Patagonia’s contribution has also helped establish working relationships with natural resource managers and educators in the Pacific.
BCI likes the fit of this partnership and looks forward to it lasting for many years, just like Patagonia clothing.

William E. Rainey, who is an evolutionary biologist at the Museum of Vertebrate Zoology, University of California at Berkeley, is particularly interested in the systematics and conservation of island fauna. He thanks the many people in Micronesia who contributed their time, knowledge, and other resources or offered access to their lands for this survey. 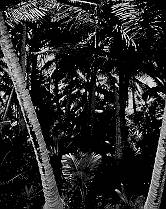 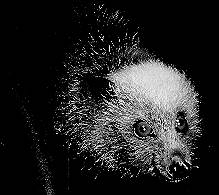 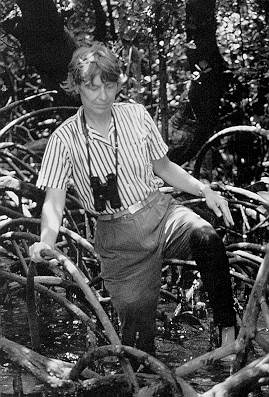 Dixie Pierson emerges from a clump of red mangroves on an island near Pohnpei. Hunters had said a major colony of flying foxes lived in the mangroves, but she and Bill Rainey found only five bats

Scanning the forest canopy below, a survey team searches for flying foxes. 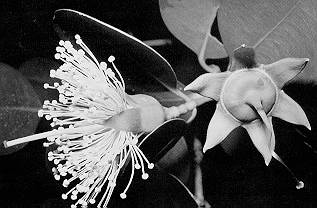 Throughout the Pacific and Southeast Asia mangrove flowers(Sonneratia alba) are pollinated by bats. Mangroves are valued for their timber, and they also are vital to seafood industries; numerous fish and crustaceans spawn in the protected waters amidst the roots of mangroves.