Three years ago I would have been horrified had anyone told me I would one day make a corner of my kindergarten classroom into a bat cave. During the pursuit of my master’s degree, however, a class called “Arizona Wildlife” changed my perspective. Each day we learned about a different type of animal native to Arizona. When the day came for bats, I actually contemplated skipping class—I was that bataphobic. By the end of the lecture, though, I no longer feared bats, I loved them! I immediately joined BCI and began planning a bat lesson for my class. I even found out that a building on the university campus was the roost of a rather large bat colony and began driving there almost every evening to watch the bats emerge. I guess you could say I got a “new battitude.”

With the popular book Stellaluna in hand, I set out to create my thematic unit on bats. My best resources were BCI’s Educator’s Activity Book about Bats and Very Elementary Bats video. My students enjoyed the lesson, but to really make my message hit home, I knew I had to do something big—a bat cave!

The first year I made a simple cave. It was such a hit, I designed a more elaborate one the next year (see instructions, opposite page), which to my surprise, held its shape for the full five weeks until I finally took it down.

It wasn’t just the cave, but the enthusiasm of my students and their clever additions that made the lesson such a success. The first year, we made informative displays to teach students from other classes about bats. For example, we had life-size cut-outs of the largest and smallest bats in Arizona and the world. A jar with two tablespoons of red water showed how much blood a vampire bat drinks on average in one night. After two weeks, more than 100 students had been through our cave and seen our displays.

The second year, we went truly batty. This time, I let teachers choose which components of our “Bat Tour” they wanted for their classes: either the simple tour, which meant visiting the cave and listening to a tape of bat facts my students had recorded; or the deluxe tour, in which visiting students constructed paper hard hats, listened to the tape in the cave, made bat masks or puppets, then played the game “Bat and Moth.”*

The second year, my class and I hosted more than 200 students. Now I can proudly say that my bat lesson has had the impact I wanted. I just hope no one expects me to top myself next year!

Kim Smith is a Kindergarten/First-grade teacher at La Senita Elementary School in Kingman, Arizona. She continues to refine her classroom cave design, experimenting with PVC, fabric, and other materials. For instructions on her latest cave design, send a self-addressed, stamped #10 envelope to Kim Smith, 9189 N. Concho Dr., Kingman, AZ 86401.

* This popular game teaches students about echolocation by having them rely on sound, not sight, as one blindfolded child, in the role of bat, tries to catch others playing moths. Versions of the game appear in National Wildlife Federation’s NatureScope and BCI’s Discover BATS! educator’s kit. 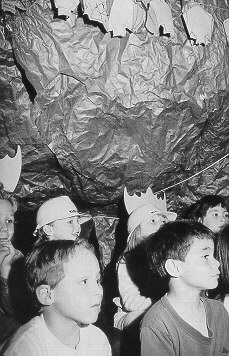 Inside the cave, paper bats hang overhead as visiting students, some outfitted with hard hats, listen to a tape of bat facts recorded by the author’s class. The children learn to appreciate bats but leave them alone.

(Directions assume you are facing the corner.)

1. Clear an area approximately 10 feet (3 m) square in a corner of the classroom.

2. Tape paper bats to the right-hand wall in a fan-like emergence formation, starting about 8 feet (2.5 m) from the floor, if possible. After the cave is constructed, it will look like the bats are flying out of it.

3. Tie a small loop on one end of the string, and staple the loop to the right-hand wall, about 2 feet (.6 m) from the ceiling and 1 foot (.3 m) from the corner where the two walls meet.

4. Bring the string a short distance across the corner to the other wall. Cut it, make a loop, and staple the loop to that wall.

5. Repeat this process, placing each new string lower and lower down the wall, about two feet apart, and increasing the length of string each time to form a triangular shape.

6. When finished, your cave framework will look flat. To create a curve, place a small table on the outside of the cave at the middle of the bottom string. Tie a very long length of string to each of the two table legs nearest the framework. Take each of these two strings up vertically under the horizontal strings to the high point of the cave and staple them to the wall. Gently pull the table away from the cave to create a curve in the framework. One side of the table will also serve as the children’s entrance to the cave.

7. Have your students crinkle and rub sheets of kraft paper together to make it soft and give it texture. Beginning on the left-hand side of the string framework, lay one sheet of paper at a time over the string. The sheet closest to the wall should be tucked under and stapled to the wall. The next sheets should be taped together from left to right with clear packaging tape.

8. Continue laying paper, but stop before finishing on the right-hand side. This is where you will make a secret adult entrance to the cave. You simply need to attach one large sheet at the top so that it will hang vertically down to the ground and can be picked up like a flap.

9. Finally, be sure to cover the table with paper as well, leaving one side open for the children’s entrance.

• Have the students make bats and stalactites out of construction paper. Attach these to the strings inside the cave, so they hang down over the children’s heads.

• Sponge-paint white bats on black paper, then hang the paper on a wall inside the cave. Shine a black light on the paper to make the white bats look fluorescent.

• During the Halloween season, look for strings of bat lights (similar to Christmas lights but shaped like bats) to buy and hang in the cave. 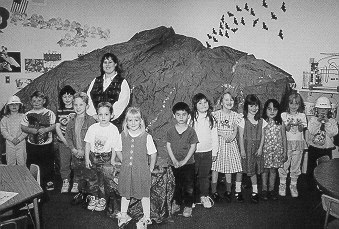 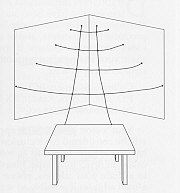 The author and her students pose around their classroom cave. Behind the girl at center, a small table anchors the strings and forms the crawl-through child entrance.