A gathering of nations at BCI's Pacific Island Flying Fox Conference focuses on the future. . .

REPRESENTATIVES FROM 14 island nations and states, and places as distant as Sweden and Scotland, recently came together for an historic event: an international meeting on the conservation of Pacific island flying foxes. Designed to help people from the islands secure a better future for their bats and rain forests, the Pacific Island Flying Fox Conference was hosted by Bat Conservation International in Honolulu, Hawaii on February 1-2, 1990.

Through the conference, wildlife managers from the islands were able to meet with scientists and leading conservationists for discussions about problems facing Pacific island bats. For the first time, many representatives learned how important flying foxes were to their island ecology and in some cases, to their economies as well. Comments like, "I didn't know these bats were so important or so threatened," were frequently overheard.

The need for such a gathering was motivated by growing international concern about flying fox extinctions and declining populations throughout the Pacific. Although habitat destruction is widespread in all tropical regions, commercial hunting of flying foxes is the principal problem.

The trade is focused on Guam and the Marianas Islands where 15,000 to as many as 25,000 flying foxes are eaten annually as a delicacy. Most bats are imported from other small islands in the Pacific, where several species have already become extinct, at least in part due to over-hunting.

"If flying foxes were to go extinct on Western Samoa, then the group of plants that rely entirely on bats would also go extinct," Thomas Elmqvist, a Swedish ecologist, told conference participants. He noted that bats are particularly crucial to island rain forests where the diversity of insects and birds that pollinate flowers or disperse seeds is very low. A conservative estimate reveals that at least 30% of the highly endemic flora of Western Samoa is dependent on flying foxes for pollination or seed dispersal. On Guam the proportion is even higher at 40%.

Marty Fujita, a conservation biologist with the Conservation and Research Center of the National Zoo, pointed out that the decline in bat populations also has potential economic consequences. Her research, which was funded by BCI [BATS, Spring 19881, documented that more than 450 commercial products come from plants that rely on flying foxes. In many parts of the Pacific, mangroves, which are pollinated by bats, provide habitat vital to seafood industries. Other familiar island plants dependent on bats include kapok, pandanus, and breadfruit, which add substantially to island economies in addition to various bat-dependent timber trees.

A HIGHLIGHT OF THE CONFERENCE was the timely announcement that the U.S. Fish and Wildlife Service would soon be placing two wildlife inspectors on Guam. David McMullen, Assistant Director for Law Enforcement for the USFWS in the Pacific region, received enthusiastic applause from conference participants when he made the announcement.

The inspectors will implement recent changes in the CITES treaty. Last October, the addition of flying foxes to Appendix I of the treaty created the means to regulate international commercial trade by prohibiting importation of the seven most threatened species into Guam from international sources [BATS, Winter 1989-90]. Several island participants noted that the new regulations will make their bat conservation work much easier because they can now justify a no-export permit policy for the protected species.

Exchanging ideas on local conservation initiatives already taken proved particularly useful to island groups who were just formulating their own plans. Representatives from Vanuatu, Papua New Guinea, and the Philippines reported on recent local laws that prohibit export of their bats. Marjorie Falanruw, a wildlife biologist familiar with both the bats and the culture of Yap (a group of islands south of Guam), described how her recommendations in the early 1980s led to a ban on hunting bats there, which allowed time for the population to recover. Presenting examples of how, historically, the taking of bats was limited by traditions, she told the conference how the Yapese culture and cultures of other Pacific islands appear to have recognized bats as a vulnerable resource.

"The P'ea [flying fox] is identified and appreciated as an integral and highly valued part of the traditional Samoan forest," said Caroline Sinaviana, an anthropological folklorist and President of the Samoan conservation group called La Vaomatua (Samoan for 'the rain forest'). Samoan traditions facilitated the establishment of regulations prohibiting the export of bats from their islands and protecting almost all of the lowland rain forest left on Western Samoa. In American Samoa, nearly 8,500 acres of rain forest, prime habitat for flying foxes, were designated for protection by the U.S. National Park Service in late 1988 [BATS, Winter 19881.

ALTHOUGH SOME ISLAND NATIONS already had begun addressing the problem of their declining bat populations, others emphasized a lack of information and a strong need for assistance. Referring to the bat total imported into Guam from Pohnpei during 1989, Bermin Weilbacher, the representative from Pohnpei, ac knowledged, "The only thing I know about the flying fox population on my island is that there were at least 6,000 last year." Training islanders to conduct their own surveys and research on bats will be an important component for understanding the conservation needs of Pacific island bats.

"Educational programs and materials simply can't be developed without the perspectives and expertise that you, who live and work on the islands, can share with us," Pat Morton, BCI's Director of Education, told conference participants. The response was enthusiastic; many is landers affirmed that they were eager for educational materials about bats and would assist in their distribution and preparation.

THE CONFERENCE WAS CRUCIAL to development of BCI's Pacific island flying fox conservation plans. Even though changes in the CITES treaty will greatly curtail international commercial trade in flying foxes, enforcement of the new regulations may not be enough to secure the future for some flying fox populations and reestablish healthy numbers. Island bat education programs, research, and management initiatives are all part of BCI's long-term goals.

BCI plans to assist with technical training and helping islanders to determine the status and management needs of their bat populations.

At the end of the conference, participants gathered to sign "The Pacific Island Flying Fox Declaration," formalizing the unity and spirit of the assembly. The signatures marked their commitment to promote the conservation of island bats. "I have to go back and convince my government that bats are worth being concerned about," said Bermin Weilbacher. The information presented during the conference provided essential tools for accomplishing this goal.

Expressing the sentiment of many conference participants, Gary Wiles of the Guam Department of Aquatic and Wildlife Resources stated, "This is the best thing that has happened for flying foxes since I started working in the Pacific nine years ago." Discovering that the majority of people with the responsibility for managing flying fox populations were genuinely concerned about the bats was encouraging. With new information they received at the conference and assistance from BCI and other organizations, the islanders now have a better chance to keep flying foxes a part of their environment and culture.

[AUTHOR BIO]
Gary L. Graham is Associate Science Director of Bat Conservation International. Mari Murphy is Editor of BATS. BCI thanks everyone who participated and helped make the conference a success. We also thank American Airlines and Sunshine Travel of San Antonio for their extra effort with the complex travel plans.

ONE OF THE most dramatic events of the Pacific Island Flying Fox Conference was David McMullen's announcement that the United States Fish and Wildlife Service (USFWS) will send two inspectors to Guam by late March to begin regulating against the importation of protected flying foxes. Placing inspectors on Guam is crucial to implementation of the CITES treaty, which now protects the seven species of flying foxes most severely threatened by international trade.

The U.S. government is assisting with flying fox conservation in three important areas. In 1988 legislation was signed to create a national park on American Samoa, in part to protect bats. Last year USFWS representatives initiated and promoted changes to give maximum protection to flying foxes through amendments in the CITES treaty, and this year they are following through with implementation and enforcement of the treaty. This last action was particularly timely; key persons from many of the affected islands were informed about what the United States was doing to meet the commercial trade problem in the Pacific.

BCI's PACIFIC ISLAND Flying Fox Conference was made possible through a generous donation from the Lubee Foundation, Inc. Luis Bacardi, president of the foundation, devotes full time to protective breeding of endangered species, mostly birds and mammals. He has had a lifelong love for animals and is especially interested in bats and small neotropical cats.

Bacardi established the Lubee Foundation to further his conservation work. One of his goals is to develop special facilities and staff expertise for working on behalf of endangered bats. Most recently, he became concerned about the serious plight of flying foxes and currently is playing a key role in BCI initiatives for their protection.

The Pacific Island Flying Fox Conference would not have been possible without Bacardi's assistance and participation. BCI and the representatives of the 14 nations and island groups that attended the conference are deeply appreciative. 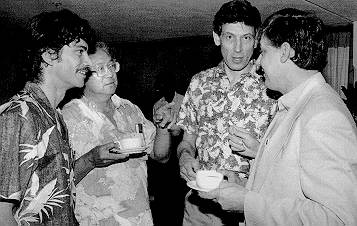 The role of the U.S. Fish and Wildlife Service will be key to helping enforce the new CITES regulations that protect flying foxes from international trade. Representing the USFWS were (left to right)John Engbring Ernest Kosaka Allan Marmelstein. and David McMullen. 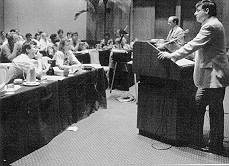 David McMullen's announcement that the (U.S. Fish and Wildlife Service will soon be placing inspectors on Guam was one of the highlights of the conference. 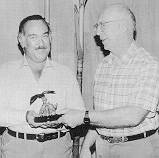 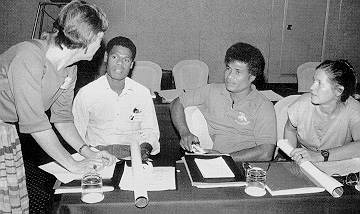 The conference presented an opportunity for representatives from Pacific island nations to collaborate with scientists and conservationists on solutions for dealing with declining flying fox populations. Elizabeth Pierson (left) engages in a discussion with Ernest Bani of Vanuatu, Guy Kula of Papua New Guinea, and Marjorie Falunruw from Yap.