Through extraordinary adaptation, this bat thrives in some of the earth’s most stressful conditions . . .

California leaf-nosed bats (Macrotus californicus) have ranked among my favorites ever since cinematographer Dieter Plage and I spent a week in 1989 training and filming them for The Secret World of Bats documentary. Imagine what it must have been like for these shy, nocturnal animals to learn to hunt, on human command, in front of flood lamps and a noisy movie camera. Then consider the bats’ frustration at being allowed to catch only the few crickets that happened to run toward the camera with perfect timing for the shot. Although the crickets didn’t always cooperate, our cast of four trained bats put in flawless performances, and we got the shot using only a portion of our 1,000-cricket arsenal. With 400 frames of film wasted on every imperfect second, we were grateful that CBS Television was picking up the tab and that our bats were such capable movie stars, both in their ability to learn and in their patience.

California leaf-nosed bats not only are incredibly good at learning novel behavior that pleases scientists, but also are marvels of technological sophistication. Although they live in some of North America’s most extreme deserts, they have never been seen drinking and can easily live in a laboratory without water for at least six weeks at a time.

This species also ranks among the world’s most amazing stealth hunters. Helicopter-like flight enables California leaf-nosed bats to pluck insects directly from foliage without even having to slow down. With their huge ears, they can detect and locate sounds as faint as a cricket’s footsteps or a caterpillar’s munching mandibles. Their large eyes provide night vision on a par with our best military goggles, enabling them to spot tiny sleeping insects illuminated by nothing more than faint star light. In fact, they prefer to rely on vision alone except when confronted by total darkness. In such situations, they simply switch to echolocation, with which they can detect objects as small as seven-thousandths of an inch (0.19 mm) in diameter. They also use special whispering-type signals that can be heard no more than three feet away, preventing most prey from anticipating their approach until it is too late.

These unique creatures live primarily in caves or abandoned mines in arid regions of northern Mexico and Baja California and northward into southern Arizona, California, and Nevada–restricted from moving farther north by their inability to hibernate or migrate. Their short, broad wings and helicopter-like flight are not suited to long-distance travel.

To survive winter, they must find the few available roosts that are geothermally heated; only mines or caves of approximately 84°F will do. The bats emerge to feed in the cold for up to two hours at a time, even when temperatures fall to 50° F, though they often cannot take in as much energy as they need. In February, they typically are able to find only about half of the food needed to maintain constant body weight, forcing them to rely on stored fat for the remainder.

When roosting, this species is able to walk bipedally in a manner rare among American bats. While hanging from the ceiling, the bat swings each foot back in succession, bending its head at right angles toward the rear, so that it is looking straight ahead while walking backward–giving the appearance of walking forward!

Like most temperate-zone bats, California leaf-nosed bats mate in the fall, but unlike other species, they do not have delayed fertilization. Typically, females of other species hold sperm throughout the entire winter before ovulating and becoming pregnant. In fact, bats are the only mammals in which sperm can survive in this way, and this approach appears to require that bats enter deep hibernation for most of the winter. California leaf-nosed bats, however, become pregnant soon after mating in the fall. The embryos develop extremely slowly over the winter, followed by a normal three-and-a-half-month period of rapid development in spring. Interestingly, studies have shown that neither increased roost temperatures nor a greater food supply will speed embryonic development in winter. The eight-month gestation ensures that young are born in late spring, at a time when mothers are able to support them. In May or June, each mother produces a single pup, which she nurses for about a month. Pups are born with eyes and ears open and a body that is already furred.

In summer, adult females form nursery colonies, typically including 100 to 500 individuals, while males form separate bachelor colonies, often nearby. A few dominant males remain with the nursery colony, each guarding a small group of 5 to 25 mothers and babies in a manner similar to the harem groups observed in some other bat species. Roosts are mostly found within the twilight zone of a cave or mine–the area just 25 to 75 feet in from the entrance. The sites chosen are normally those that remain between 85° and 95° F, even though outside temperatures may exceed 110°.

Female pups reach reproductive maturity in their first fall, only a few months after birth; male pups, however, do not become sexually active for another year. In September or October, males seek out special areas in caves or mines solely for the purpose of courting [BATS, Spring 1995]. Females arrive at the male sites in groups after dark. As they file past, the males put on vigorous wing-flapping displays and vocalize in a manner we might interpret as singing. After some deliberation, a female may land next to a male or allow one to approach her. The male then nuzzles her and attempts to wrap his wings around her as a prelude to copulation. Often competing males will attempt to disrupt the couple by boxing the courting male or even flying into him.

Occasionally, these bats share roosts with other species, such as the Mexican free-tailed bat (Tadarida brasiliensis). Conditions in free-tail caves are far from ideal, however.

The ammonia levels–caused by gas emanating from dermestid beetles feeding upon bat droppings–can be life-threatening to other animals. To survive, California leaf-nosed bats reduce their respiratory and cardiac rates by as much as 60 percent. With this change, carbon dioxide is retained in the blood and in respiratory mucus, buffering the ammonia’s toxic effects. An ammonia level of 250 parts per million can be highly hazardous to humans within an hour or two. The bats can tolerate up to 3,000 parts per million for as long as nine hours.

Competition for food with free-tails and other roost mates is rarely a problem because of the California leaf-nosed bat’s unique feeding strategy and food choices. Free-tailed bats fly high in the sky, like little jets, often feeding on flocks of migratory moths, while leaf-nosed bats search slowly, close to the ground, for insects perched in plant foliage. They prefer rather large insects–approximately 11/2 to 2 inches long (40 to 60 mm)–but will target prey as small as pill bugs (Isopoda). More common foods include a variety of grasshoppers and katydids; June beetles and diving beetles; and sphinx, underwing, and noctuid moths. These bats are the only ones in North America known to catch caterpillars and are among the very few insect-eating bats that supplement their diets with cactus fruit.

Although the California leaf-nosed bat’s tremendous appetite for insects is important to the balance of nature, many people like this species simply because of its cute, winsome face. I personally owe a debt of gratitude for the tireless efforts of four of them on behalf of The Secret World of Bats film. For the bats’ sacrifice of a few nights’ freedom, millions of people in more than 60 countries have gained a new appreciation for these marvels of the night skies and their equally fascinating relatives.

Merlin D. Tuttle is Founder and Executive Director of BCI. Portions of this article are excerpted from his forthcoming book, Bats of North America, to be published by University of Texas Press.

The author would like to thank Dr. Patricia Brown for sharing many of her unpublished observations of California leaf-nosed bats. 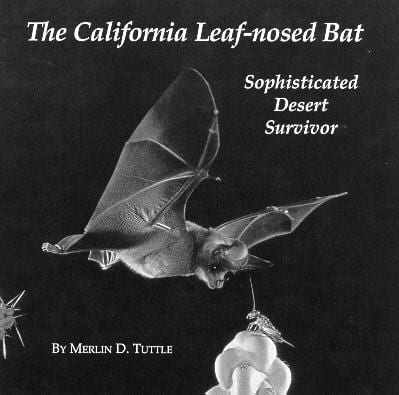 Because the California leaf-nosed bat can make a near-silent approach, its prey is often caught off guard. This cricket has discovered its fate too late. 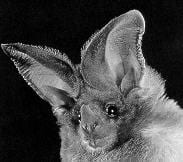 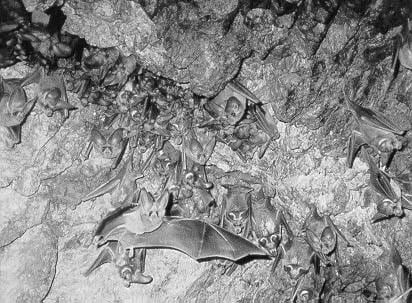 Abandoned mines provide shelter as well as courtship sites for many California leaf-nosed bats, such as this colony photographed by biologist Patricia Brown.