Bats have few friends on the island of Puerto Rico, but the dedicated few are working hard for their survival . . .

Every evening when I was a child, a gentle shower of bats fell at my home in Puerto Rico, announcing the day’s end. Free-falling at first over the weathered veranda above our heads, the bats would turn in graceful arches and fly off into the waning light.

I was lucky to live in a turn-of-the-century wooden house–the kind with high ceilings and rusting sheet metal roofs still widely found in Caribbean towns. Between the metal planks and the wooden ceiling lived a whole colony of bats, which none too quietly gave away the location of its daytime roost.

Though very much a part of the household, bats did not enjoy the amnesty extended to other wild creatures, as local custom dictated. Geckos were free to leave the temporary security of anything hung on the wall and squirm their way to another hideaway. The beloved local frog, the coquí, lived peacefully in rotting wood by the old water tank. Even the ubiquitous Anolis lizards engaged unmolested in courtship displays on every windowsill. But absolutely no bats would be tolerated inside the house.

On those rare occasions when a bat entered the house, the ensuing commotion was the closest we had to an atomic bomb drill, with added tropical flavor. Hands flew to heads and bodies bent to the ground, for we knew all too well how these conniving, sightless creatures meant to entangle themselves in our hair!

Even outside the bats had no peace. Sometimes–out of ignorance, or malice–my siblings and I held a macabre "batting practice" under the streetlight. Fortunately, the bats were exceedingly crafty at eluding our clumsy swings while still somehow securing a meal from the halo of moths in the light.

Though I now see bats in a completely new light, my childhood misconceptions are still alive and well on my island home. Many Puerto Ricans still view bats as diseased creatures deserving little, if any, respect. And for the 13 species living on this roughly 100-by-35-mile island, this lack of respect has made life quite difficult.

Puerto Rico, a territory of the United States since 1898, is the smallest of the islands of the Greater Antilles. (The others are Cuba, Hispaniola, and Jamaica.) It is roughly the size of Yellowstone National Park, or half as large as the state of New Jersey. Packed onto this small island are rain forests, thorn scrub, wetlands, and karst formations, as well as an estimated 3.8 million people and their roads, houses, and attendant development. This is a land that has seen incredible destruction of its native habitats. It is believed that the primary forests have been reduced to about one percent of their original extent.

Bats–the only native land mammals to have survived the colonization of the island by Amerindians and Europeans–are the sole reminders of an impressive fauna that once included ground sloths, rodents, insectivores, and perhaps monk seals in the offshore waters. Bone fragments attest to the fact that an additional three bat species once lived here as well, but these are long gone.

The bat fauna of Puerto Rico is distinctively Greater Antillean in character. Roughly 40 percent of its species are found nowhere else but in these islands, while the rest are more wide-ranging. (Three of these are found in both the United States and Mexico: the big brown bat [Eptesicus fuscus], the red bat [Lasiurus borealis], and the Mexican free-tailed bat [Tadarida brasiliensis].) There are a total of seven insect-eating species; four feed primarily on fruits; and one species feeds on nectar. Another, the Mexican bulldog bat, or fishing bat (Noctilio leporinus), primarily eats fish. Despite some of the highest amphibian and lizard densities anywhere in the world, in Puerto Rico no bats are known to prey on this extremely abundant resource.

Puerto Rico has relatively few bat species compared to other Caribbean islands, but this variation could be explained by its distance from mainland dispersal centers. As an example, Jamaica, which is roughly the same size (but closer to Central America and two other islands), harbors 21 species, eight more than Puerto Rico. There are six endemic bat subspecies in Puerto Rico but no species unique to the island, though it provides the bulk of the habitat for the enigmatic red fruit bat (Stenoderma rufum), a species otherwise known only from the Virgin Islands.

Most of the species on the island are dependent on caves. Although our bat populations are not as large as those of Thailand or Texas, Cucaracha Cave, near Aguadilla in northwestern Puerto Rico, harbors an estimated 700,000 bats. About 75 percent are Jamaican long-tongued bats (Monophyllus redmani); 19 percent are sooty moustached bats (Pteronotus quadridens); and six percent, Antillean ghost-faced bats (Mormoops blainvillii). Interestingly, Mexican free-tailed bats, famous for their huge colonies in the American Southwest, are not present in this cave. The feeding columns of Cucaracha’s emerging bats sometimes extend five miles from the cave mouth, providing a unique, but untapped, wildlife spectacle. Other caves such as Vientos, in the north-central part of the island, may harbor even greater concentrations, but they remain unexplored; their bat fauna, unstudied.

Although there have been no long-term studies of bats as a group in Puerto Rico, bats must have benefited from the transformation of the island’s economy in the last 50 years. Once primarily an agrarian economy, the territory shifted to manufacturing and service industries after the early 1940s. As a result, the countryside has emptied of people, and agricultural activities have greatly diminished. These fallow lands have reverted to pasture and forests, to the point that today the island, at close to 40 percent forested, has the most extensive forest cover since the turn of the century. In some cases the regreening of the island has been nothing short of impressive, with lands under sugar cane cultivation reverting to dense forest in a span of only 24 years. Unlike most tropical countries, Puerto Rico can boast of actually increasing the extent of its forests in this century of destruction.

Unfortunately, half a century’s gains are in danger of disappearing. Accelerating urban sprawl and infrastructure developments, such as massive highway projects, are encroaching on the newly forested lands. One particular highway project may harm the aforementioned Cucaracha Cave, home to so many thousands of bats, unless a new alignment is sought for the road. Responsibility for land planning, however, has been decentralized and handed over to some 78 island municipalities, making a coordinated regional effort on behalf of conservation that much more difficult.

Even the development of large cave systems for tourism has failed to take into account the impact on bats. "They never bothered to look into that," observes Dr. Armando Rodríguez-Durán, Puerto Rico’s leading bat expert, speaking of the development of the Camuy Cave Park. One of the most important tourist attractions on the island, this park was developed by the island government around an impressive underground river-and-cave system. That bats–undeniably associated with caves–were not considered in the planning of this attraction underscores their status on the island.

However, government conservation efforts and, especially, the blossoming of environmental organizations are encouraging signs. The Puerto Rican Department of Environmental and Natural Resources compiles data on bats and other biological resources under the aegis of its Natural Heritage Division, which also identifies tracts of land that should be protected for their conservation value.

Most encouraging, though, is the increasingly important role of pri-vate nongovernmental organizations (NGOs). Though no group focuses solely on bats, some do concern themselves with chiropterans. One of these is Ciudadanos del Karso (Citizens of the Karst, or CDK), which is lobbying to protect what Dr. Rodríguez-Durán calls "Puerto Rico’s bat country," the limestone region in the north of the island.

A significant achievement of CDK has been the purchase of a 110-acre property, now known as the Mata de Plátano reserve, that contains Cueva Culebrones, or Cave of the Boas. Named for the endemic Puerto Rican boas that prey on bats during their nightly exodus, the cave is home to an estimated 300,000 bats of five or six different species.

"No other parcel secured for conservation in Puerto Rico has been acquired because of a bat cave," comments CDK president Abel Vale on the importance of the reserve. "Bats need this type of warm cave, and so few are known that it is essential to protect any we find. As a bonus, the boa, an endangered species, is most abundant in this area."

Not only is Mata de Plátano the sole area in Puerto Rico protected especially for bats, but also it is setting other precedents in the island’s conservation picture. "It is the first time that an NGO in Puerto Rico has acquired land for conservation without a government subsidy, setting this reserve apart from the rest," explains Vale. The $125,000 needed to establish the reserve was raised by CDK supporters.

The efforts of the government and private groups are necessarily the first steps in safeguarding bats and other wildlife populations on the island. However, the full weight of this task can’t rest solely on their shoulders, as manpower and budgetary limitations will inevitably set limits on what they can achieve. With more funding, for example, CDK would like to expand Mata de Plátano, set up a research station, and protect Vientos and Cucaracha caves–all worthwhile projects currently out of reach.

Any lasting future for Puerto Rico’s long-misunderstood bats will come only with widespread support for conservation, a concept still fairly alien in the culture. Environmental education is imperative. With luck, someday not too far into the future, I will get stares of disbelief and disgust when I relate my childhood bat-bashing stories to the next generation of Puerto Ricans.

José Placer is a biologist and journalist currently working on his graduate degree in environmental interpretation and communication at the University of Idaho.

Rodríguez-Durán, A. 1998. Non-random aggregations and distribution of cave-dwelling bats in Puerto Rico. Journal of Mammalogy, Vol. 79,

Show your support for bat conservation in Puerto Rico!

Write to Ciudadanos del Karso (CDK) to thank them for their efforts on behalf of bats:

For more information on CDK, visit their web site at http://netdial. caribe.net/~enlacepr/CDK/

You may also wish to write to another environmental organization, the Natural History Society of Puerto Rico, to encourage them to include bats in their conservation efforts: 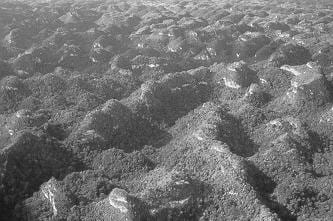 Puerto Rico’s most important bat habitat is in karst country like this in the northwest of the island. The type of terrain shown is referred to as "haystack hills." 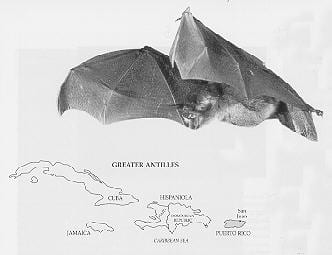 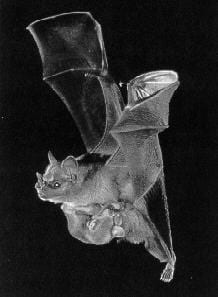 Right: A Jamaican fruit-eating bat mother flies with her newborn pup in tow. 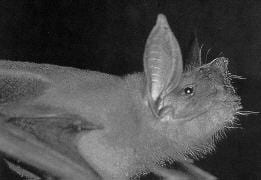 Left: The Mexican bulldog bat, also known as the fishing bat, has bright red fur and uses its huge feet and long, sharp claws to catch small fish near the water’s surface. 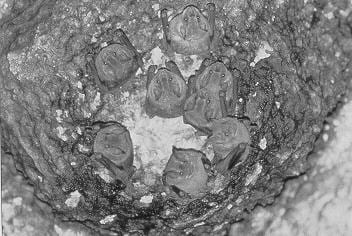 Jamaican fruit-eating bats roost in harems, in which the male bat closely guards several females, fending off other males. These bats are important seed dispersers and pollinators in tropical forests.