Four years ago, few people, other than BCI staff and a handful of local members, ventured out to take in the spectacle of hundreds of thousands of bats emerging from beneath the Congress Avenue bridge in downtown Austin. For years, local newspapers had carried headlines like "Bat colonies sink teeth into city" and "Mass fear in the air as bats invade Austin." Misinformation abounded, and the bats that made Austin, Texas their summer home were regarded as something to be eliminated, not as something wonderful to see.

When Bat Conservation International moved its headquarters from Milwaukee to Austin early in 1986, we arrived just in time to receive one of Texas Monthly magazine’s annual tongue -in -cheek "Bum Steer" awards for the decision. Austin already had quite enough of its bats, thank you. Local conservation groups welcomed BCI, but many others, overlooking that ‘Conservation’ followed ‘Bat’ in our name, thought we were the answer to their bat problems.

And we were. But not in a way anyone other than a bat lover armed with facts would have predicted. Today, Austin’s bats attract attention worldwide, not as something to be feared, but as a treasure. Now they are one of the city’s most popular, if somewhat unusual, tourist attractions. Travel agents say they are often asked about the bats, and many travelers come long distances just to see the Austin bat flight. On warm summer evenings, tourists join growing numbers of local bat aficionados to await the nightly exodus. Crowds of several hundred are not unusual.

This year, the city officially welcomed the bats with a special event on April 20, organized by BCI, to dedicate a four -panel educational kiosk near the colony. "We’ve become the bat capital of America," Mayor Lee Cooke proudly told the crowd. "It’s really exciting that we’ve come from concern to a position where we want to protect, desire and covet, and welcome the bats." The large turn -out, an enthusiastic crowd of nearly 700, reflected the change in attitude toward bats. Other speakers were Merlin Tuttle, Founder of BCI, and Manuel Mollinedo, director of the Austin Parks and Recreation Department, which funded the kiosk. Representatives from Austin schools’ new B.A.T. Clubs (Bat Awareness Teams), Jason Buch and Sarah Csillagi, also spoke. They told younger members in the crowd that they didn’t have to wait until they were adults to make a difference in conservation, but that they could start now.

As part of the dedication festivities, over 100 B.A.T. Club members sporting “Ask Me About Bats!” buttons covered the hillside below Austin’s Shoreline Grill. Developed by BCI, the clubs are headed by Marilyn Cain, director of Austin schools’ AIM High Science Program for gifted and talented children. Kindergartners through sixth graders can participate in a 10 -week extracurricular study and activity program. BCI provides technical support to teachers and assistance with curriculum development, which includes bat biology and solving problems for Texas bats. Eleven schools are participating, and 12 more are planned.

The idea for the kiosk grew out of a meeting last fall between Pat Morton, BCI’s Director of Education, and the Austin Environmental Health Department. They met to discuss posting a permanent sign under the bridge to caution people who came to see the emergence against picking up grounded bats they might find. Even though less than half of one percent of bats contract rabies, caution should always be exercised with potentially sick individuals. In further discussions, Stuart Strong, head of planning for the Parks and Recreation Department, advocated that the sign be expanded into an illustrated, educational kiosk that would also describe the colony and its natural history, in addition to general bat facts. The kiosk, developed with the assistance of BCI, can now be seen beside the hike and bike trail just east of the bridge.

The Congress Avenue bridge spans Town Lake on the Colorado River. In the expansion joints beneath the bridge dwell an estimated 750,000 Mexican free -tailed bats (Tadarida brasiliensis) – -the largest urban bat colony in North America. Reconstruction on the bridge in 1980 created new spaces three -quarters to four inches wide and about 16 inches deep. Free -tailed bats, no strangers to Austin, found the new accommodations irresistible and began moving in shortly afterward, although large numbers did not become evident until about six years ago. Bats have long occupied buildings on the University of Texas campus, the stadium, the State Capitol, and many other structures around the city. Had city planners known the new bridge deck would attract even more bats, they would, no doubt, have altered the design. Fortunately for the bats– and for Austin– the planners had no idea what effect the reconstruction would have.

The colony is mostly female. Apparently leaving the majority of the males behind in Mexico where free -tails spend the winter, females arrive pregnant sometime in mid -March. Each gives birth to a single pup in early June, who learns to fly in about five weeks. Late summer into fall, bats from other locations around the city and migrants from farther north begin joining the Austin colony, the growing numbers creating spectacular bat flights. By mid -August as many as five columns form over the river. Although a small group may overwinter at the bridge, most leave sometime in early November, hitching a ride south on the winds of one of the first cold fronts.

With up to a million and a half bats at peak, the Austin bat flight is even greater than that of the famed Carlsbad Cavern colony in New Mexico, whose population has declined to about 250,000. Bats begin pouring out from beneath the bridge near sunset, either before or after, depending on the season and weather. BCI is conducting a study to determine factors that influence the timing. Preliminary observations indicate they depart earliest on warm, calm evenings, especially in July and August (some mid to late August flights leave as early as 45 minutes before sunset).

No one knows how far the bats really go, but it is likely that they cover more than a thousand square miles of surrounding countryside in a single night. During this time they consume an estimated 10,000 to 30,000 pounds of insects, depending on the number of bats present in the colony.

The patio at the Shoreline Grill is one of the favored viewing spots for the emergence, and during summer, dinner reservations timed for the evening event are hard to come by. When the bats begin their flight, guests abandon their meals to watch the long, thick columns forming against the setting sun. Pat Morton briefs the restaurant staff early each spring to help them field questions, and BCI provides them with flyers to hand out to guests.

What Austin once thought was a liability is now seen as an asset. Headlines have gone from provoking fear to inspiring awe, and all major television networks have featured segments on the colony. The bats haven’t changed; people have. Given the opportunity to learn what bats are really like, people can let go of their fears and begin to appreciate the vital role bats play in the environment.

Four years ago Austinites were signing petitions to poison the bats at the bridge; today many of those same people have joined BCI and now champion the bats’ protection instead. For bats, a little education makes a big difference.

[bio]
Mari Murphy is Editor BATS. Four years ago, she and Merlin Tuttle moved BCI to Austin where they frequently were the only people to witness the bat emergence.

[note]
Look for the June issue of National Geographic. It features an article about Austin, Texas, which includes the Congress Avenue bridge bat colony and BCI. 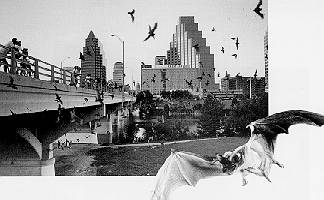 Above: The first bats begin emerging from beneath Austin’s Congress Avenue bridge as cyclists and pedestrians stop to watch. The sunset event is most spectacular in August and attracts tourists from all over the United States. 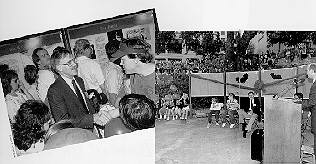 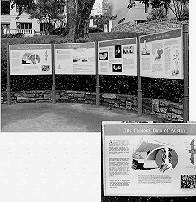 Counterclockwise from right: A kiosk describing Austin’s famous bat colony was unveiled at a dedication ceremony in Austin. Mayor Lee Cooke addressed the large crowd, and after the ceremony, Merlin Tuttle, who also spoke, was on hand to greet local members and other bat enthusiasts.