Once upon a time, bats were portrayed as storybook villains. More recently, they have become the heroes . . .

Australian children have been entertained by tales of native animals for almost a hundred years. Koalas and kookaburras, bizarre marsupials and monotremes, bush birds, large reptiles, and even the colorful fish of the Great Barrier Reef all have a part in this country’s classic literature.

Australia’s flying foxes (Pteropidae) are also familiar characters in books, as they often are in everyday life. In urban areas, flying foxes may be the first native mammal a city child sees outside a zoo or museum. Of the country’s eight species, the grey-headed flying fox (Pteropus poliocephalus) in particular has adapted to life in Australian cities along the north and northeastern coastlines and can be seen flying over familiar buildings in city skylines.

The earliest stories about native animals come from the myths of the “kooris”—the aboriginals, or native race, of Australia. The kooris claimed spiritual kinship to animals, and consequently, their ancient stories are often populated by nasty relatives. One tribe, at least, considered the flying fox a glutton and a bigamist. When his greed for fruit caused the death of one of his wives, his in-laws burned him to death.

Some of the earlier authors of European descent were equally unflattering in their depiction of flying foxes. For example, let’s take the case of The Magic Pudding (Angus & Robertson, 1918), by Norman Lindsay, an irresistible adventure in pure nonsense. A dwarfish sailor, an Australian fairy penguin, and a koala share a unique prize—a talking pudding that can never be exhausted no matter how often it is cut and eaten. This edible heirloom is the envy of other creatures, and the three owners spend much of the book rescuing Albert the pudding from two thieving marsupials, a hungry possum, and a wombat. During an attempt to recover their dinner, they come across a flying fox who they suspect is really the possum in disguise. The bat is mortified:

“Nice goings on, indeed,” said the Flying-fox, while Bill was measuring him, “if a man can’t go about his business without being measured by total strangers. A nice thing, indeed, to happen to Finglebury Flying-Fox, the well-known and respected fruit stealer.”

Every Australian child who read this passage caught the joke. Stealing fruit from a neighbor’s tree was a popular pastime of bored children, and this bat was proud to be one of the best. Of course, The Magic Pudding was published at a time when grey-headed flying foxes were commonly accused of raiding orchards and were treated as vermin. It was still legal at this time for farmers to have their local gun clubs spend a sporting day exterminating whole colonies of bats.

A much friendlier but silly representation of flying foxes appears in The Way of the Whirlwind (Angus & Robertson, 1941), written and illustrated by Mary and Elizabeth Durack. The Durack sisters were among the first children’s authors to present aboriginal folklore as an adventure that remained sympathetic to the beliefs of a misunderstood culture.

The baby brother of two koori children, Nungaree and Jungaree, has been kidnapped by the whirlwind. The children must find out from the animals where this powerful spirit goes to sleep. The yellow-crested cockatoo hasn’t time for such chit-chat:

“I’m a very busy bird with my family. Off you go now, and ask some of those idle people who have nothing better to do than sleep and eat and mind other folk’s business. What about that lazy flying-fox crowd?”

The flying foxes are happy to chat, but they’re of no help at all. The whirlwind only comes around in the daytime when they are dozing. In fact, Nungaree comes rather close to insulting the entire colony when she complains they eat and sleep the wrong way up, remarking,”‘Goodness only knows how you manage to get your dinner down.'” Everyone is pacified by a wise old grandfather bat, who begins such a long monologue that his family falls asleep, allowing the children to tiptoe off.

May Gibbs seems to have been the only Australian author to find that flying foxes could be both wise and courageous. For over 45 years she lived by the water in the Sydney suburb of Neutral Bay, where she could watch flying foxes feed on the nectar of eucalyptus tree flowers in her garden. Her children’s novels, written and illustrated from 1918 to 1952, pulse with the diversity of Australian plants and wildlife. She has drawn sympathetic characters from a number of organisms people either ignored or exterminated, such as lizards, beetles, spiders, bats, and even prickly shrubs.

Prince Dandelion (1952) takes place in a series of gardens and in the shrubby heaths of Western Australia. The main characters in the story are either plants or those animals most associated with the native vegetation.

Prince Dandelion boards a ship called Rosy Morn, commanded by Captain Sturt Pea. It’s not an easy trip as the ship is attacked and boarded by “Banksiamen”— pirates represented in the book by the fruiting “cobs” of the shrubs of the saw banksia bush (Banksia serrata). Things look pretty bleak for the crew of the Rosy Morn until the Flying Fox Battalion arrives to save the ship:

The leader, a great black creature with piercing eyes, was giving silent commands. When he swept past a yard arm, a number of his bats immediately fastened upon it. One after another all the sails were manned. Others settled upon the rigging. Everywhere their leader waved them, there they hung and waited… All the big bad Banksiamen lay helpless upon the deck, each held by dozens of little Flying Foxes.

Once the bats have pinned down all the pirates, Prince Dandelion and his friends push the Banksiamen into the sea. Ironically, it has only been within the last couple of years that fieldworkers have found that flying foxes and other bats really do clutch the cobs of some banksia species. The bats come while the cobs are still in full bloom. In exchange for nectar and pollen, the bats cross-pollinate the flowers.

Prince Dandelion is filled with puns, comic twists, and advice about kindness to animals that was not very popular at the time. The first edition was quickly remaindered, and it did not receive a second printing until just this year through Angus & Robertson. This second edition now speaks to a new generation that has learned to appreciate both native plants and flying foxes.

Surely, some of Prince Dandelion‘s late popularity was due to Richard Morecroft’s book, Raising Archie (Simon and Schuster Australia, 1991). As a volunteer for the Wildlife Information and Rescue Service, Morecroft was given an orphaned baby grey-headed flying fox to raise when its mother was electrocuted on a power line. He took the opportunity to write a book on how he raised Archie to independent adulthood, with such delightful photos as Archie being brushed, Archie with a bottle, and Archie getting a bath. While describing his experiences as a bat’s “mother,” Morecroft introduced Australian children (and many adults) to the biology of Pteropus and their essential role as tree pollinators and seed dispersers in Australian rain forests.

In less than a century, Australians have seen the literary figure of the flying fox change from abusive spouse and surly neighbor to heroic citizen and plucky orphan. As children connect these images with the real flying foxes in their city parks and suburban gardens, Australia may reap the benefits of a new generation of bat conservationists.

(Bio)
Peter Bernhardt is a Professor of Botany at St. Louis University and a Research Associate of the Royal Botanic Garden, Sydney. His most recent book was Natural Affairs: A Botanist Looks at The Attachments Between Plants and People (Villard, 1993).

(note)
The books mentioned in this article are all in print and available in most Australian bookstores, but copyright laws forbid their sale in American stores. May Gibbs’ books may be bought directly through the Nutcote Trust at P.O. Box 577, Neutral Bay, New South Wales 2089, Australia (or fax 61-2-953-0302 for a list of titles and prices). 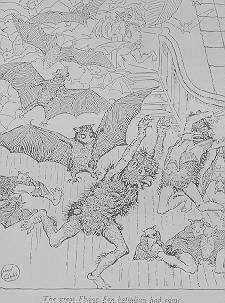 Prince Dandelion © CURTIS BROWN (AUST) PTY LTD., SYDNEY. Reprinted with permission.
Flying foxes come to the rescue of Captain Sturt Pea’s ship in Prince Dandelion>i> by May Gibbs, one of the first Australian storybooks to show bats in a good light. 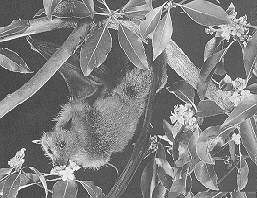 The grey-headed flying fox pollinates eucalyptus, brush box (shown here), and other important forest trees. It also disperses seeds from figs and other fruits it eats. Australians have become even more familiar with this species since the 1987 opening of the Ku-ring-gai Flying Fox Preserve near Sydney, where hundreds of thousands of grey-headed and little red flying foxes are the main attractions. 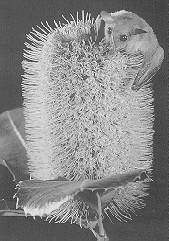 A blossom bat (Syconycteris australis), one of the smallest of all flying foxes, clutches the cob of a banksia bush, ready to gather nectar and pollen. As the bat forages from cob to cob, it will pollinate the plants and thus ensure its own future food supply. The relationship between bats and banksia plants had not yet been documented when May Gibbs pitted the two against each other in the storybook, Prince Dandelion.