Several North American Indian tribes include bats in their traditional folklore. For the Navajo, the bat holds a special significance—

For the traditional Navajo Indian in the deserts of the American Southwest, the bat is an intermediary to the divine, bridging the supernatural distance between men and gods. Bat serves as mentor of the night, as Big Fly does by day. Bat's origins are given as within the earliest world, when all was dark: twelve insects and the bat revolve in blackness.

Both Bat and Big Fly are part of the Sun-Sky complex and stand for the skin at the tip of the tongue: speech. As Sun's day and night messengers, they are identified with Talking God, one of the foremost deities. Both have the ability to penetrate where ordinary beings cannot go.

They are not gods, though, in that they do not require an offering or payment, but instead volunteer their aid. One Navajo chant describes a scene at the hogan (a traditional Navajo dwelling) of the female deity, Changing Woman. When she begged the great gods to carry an offering to Winter Thunder, everyone was afraid until finally, after much coaxing, Bat, who occupied the humblest seat near the door, consented to go.

Mentors are ever present, although sometimes invisible. At traditional Navajo assemblies, if after four nights of discussion no constructive plan has been achieved, a voice from near the door or from some concealed place in the ceiling gives a clue to the proper offering and the god to whom it should be presented. The suggestion can be obscure, but furnishes enough information to be understood with concentration. Eventually, the voice "appears," embodied as Bat or Big Fly (or as Wind or Darkness) and introduces itself as a guardian of the home of some powerful supernatural being, all of whose secrets it knows. Many times a seeker achieves his quest because whispered messages in his ear inform him of the necessary directions to perform.

In Navajo sand paintings, a traditional and ceremonial art form, brown sands form Bat, and its station is as one of the eastern guardians. A yellow diamond on its body represents a small skin that Bat received as a reward for helping depose the Gambler (a large and powerful deity).

The sand painting, "Father Sky and Mother Earth," is a paradigm of Navajo beliefs. Father Sky and Mother Earth were the first creations of the Great Spirit. Their crossed hands signify the union of heaven and earth, bound eternally together by the Rainbow Guardian. In all directions, sky and earth are fused as one on the horizon. The physical earth and sky, or mind (spirit), functions together to produce new life. All things are conceived first in thought before they become physical reality, represented by the line running from the head of Father Sky to the head of Mother Earth. Physical pain, disease, or "evil" was first conceived in thought before it appeared in the body. To cure sickness, a poor crop, or whatever the need, one must first establish a harmonious rhythm with all unknown forces.

The stars, moon, and constellations are shown on the body of Father Sky, the zig-zags crossing his shoulders, arms, and legs forming the Milky Way. The life-giving energy of the sun radiates from the bosom of Mother Earth, bringing fertility to her womb, from where the seed of all living things springs.

Bat, the sacred messenger of the spirit of the night, guards the sand painting at the opening in its border.

(Bio)
Stan Renfro, a BCI member, teaches Navajo studies and English at Wingate Highschool in Fort Wingate, New Mexico and also was a finalist in the Teacher in Space program. He says, "Fort Wingate is a starry place with only 900 people. Coyotes bark in the hills and Bat, in his Buffalo robe, flits near our street lights." 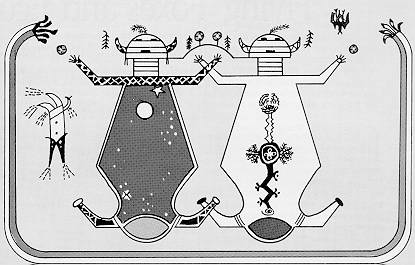 The sand painting, "Father Sky and Mother Earth." Bat, serving as mentor of the night, guards the border in the upper right corner.