Enthusiasm and dedication: the first 10–day field workshop graduates have put their training to good use. . .

Lights bouncing and bobbing off the walls, we made our way along the mine tunnel and entered a chamber deep within the hill. Then, one by one, we switched off our headlamps until we were in total darkness, waiting for the bats to emerge. Suddenly our only connection with reality was the feeling of the ground beneath our feet. We could close and open our eyes, but there was no difference. We stood there listening, hearing only the sound of water dripping somewhere in the mine. Then we heard the soft wingbeats. Bats were flying. First one, then several, then hundreds, until they were all around us. We could feel, we could hear, but we could see nothing. Yet in this confusion of movement, the bats easily avoided each other, the cave walls, and each of the awed humans standing in their pitch-black home,” wrote Margaret Gaspari, a biologist with the Pt. Defiance Zoo and Aquarium in Tacoma, Washington, about her experience at a BCI 10-day Bat Ecology Field Workshop.

Discovering firsthand the sheer wonder and sophistication of bat echolocation is only one of many experiences during the comprehensive workshops conducted by Dr. Brock Fenton, Chairman of Biology at York University in Ontario, Canada. Designed to provide wildlife biologists and others with the skills necessary for the field study of bats, the course also seeks to train educators. In the two years since the workshops began in August 1989, the first graduates have gone on to initiate an impressive array of education and bat conservation projects.

“For those of us who don’t work solely with bats, the 10-day immersion in bats provided a jumpstart of enthusiasm for bat conservation that may be as important as any of the technology,” said Jeff Gore, a wildlife biologist with the Florida Game and Fresh Water Fish Commission. What he learned proved invaluable to current and planned studies in Florida. He delivered a paper on one of his studies at the 21st Annual North American Symposium on Bat Research hosted by BCI [story, page 3].

Kirk Navo, a wildlife biologist with the Colorado Department of Natural Resources, also presented a paper at the symposium. Since the workshop, he initiated and now directs a project to survey Colorado’s numerous abandoned mines for bats [BATS, Fall 1991]. The state’s mines are being sealed or reclaimed at the rate of 600 per year, eliminating critical bat hibernation sites. Kirk prepared comprehensive guidelines on how to conduct the surveys, which have already resulted in protecting two hibernation roosts and recommendations for others.

Since enrolling in the workshop, Arnulfo Moreno, a biology teacher at the Instituto Tecnologico of Ciudad Victoria in Mexico, has been able to conduct essential field work for BCI’s cooperative project to provide protection for United States’ bat species that overwinter in Mexico [BATS, Summer 1991]. After assisting with the preliminary bat cave surveys, he conducted the follow-up, checking the same caves, as well as additional sites, to determine seasonal use.

In California, one-third of the state’s bat species are considered of Special Concern (i.e., probably threatened or endangered). Caryla Larsen, a wildlife biologist with the California Department of Fish and Game, said “the more knowledge I have about bats, the better the Department will be able to protect and preserve them.” Equipped with greater awareness of the needs of bats since the workshop, Caryla administers status review studies on California’s bats, including issuing permits for their study.

James Atkinson, a wildlife biologist at the Willapa National Wildlife Refuge in Washington, had independently developed a bat study on the coastal refuge and wanted to learn more about public education work. He also learned new bat netting techniques at the workshop, adding substantially to his knowledge of the bat fauna of the refuge.

Another workshop graduate, Nina Fascione, is a research assistant formerly with the Philadelphia Zoo. She is now an active member of the Chiroptera Advisory Group of the American Association of Zoological Parks and Aquariums and has been gathering information on bat collections and captive breeding programs at zoological institutions. At a recent international conference in Singapore, she presented a paper on her findings. About to return to graduate school for a doctorate in conservation anthropology, she is interested in how attitudes toward animals affect conservation issues. In talking about future research projects she said “I suspect that bats will somehow play a part.”

Learning how to take the knowledge gained in the workshop and put it to work educating others is an important part of the course. Kathleen Adkins, a management training consultant in Valhalla, New York, wanted to be available to her community as a resource and educator about bats. “Besides,” she said, “I just like bats!” A powerful public speaker, Kathleen is much in demand lecturing to local conservation and community groups, and at schools and parks. “I’m now known as the bat woman of Westchester,” Kathleen proudly said. She also acts as a consultant for local bat “nuisance” problems, assisting with solutions.

Terri Marceron, assistant district ranger for the Lewis and Clark National Forest, Rocky Mountain Ranger District, worked in cave management and wanted to know more about planning for bats. The workshop changed her entire perspective; bats have since become the prime focus of her conservation education work. Terri, along with Don Sasse, a wildlife biologist who also attended the workshop, has spearheaded educational efforts in her district, reaching out into surrounding communities and schools and giving dozens of talks.

Today she is part of a national cadre of instructors traveling to different districts across the country to teach Forest Service workers about implementing regional Forest Plans. The difference is that Terri incorporates bats into her training programs, emphasizing the importance of their forest habitat. Also on the national level is a special bat education project she designed as part of the Forest Service’s National Recreation Initiative. The mobile program will provide specific educational materials for different target groups and applications. These will include elementary and other schools, community and campground programs, and fixed displays in public buildings.

When callers to the Minnesota Department of Natural Resources ask about bats, Wildlife Specialist Joan Galli is now the expert they talk to. Using what she learned at the workshop, she prepared several different information packets to send to the inquiring public. She also set up a training program for state interpretive naturalists, prompting many nature centers to include more about bats in their education programs. Attending the workshop “resulted in my transformation into a bat addict,” Joan said. “It makes me wish I could be doing ‘bat stuff’ full time.”

Mary Lou Alley-Crosby, a court reporter from Washington, might echo that. Mary Lou is now a familiar face at many BCI events, learning as much as she can and talking about bats to “anyone who will listen.”

As Margaret Gaspari concluded, “we carried with us a profusion of memories and a great sense of responsibility. It is now our task to use what we have learned to educate ourselves and to pass our knowledge on to others.” Graduates of the 10-day workshops are doing just that, and bats–and the ecosystems that rely on them–can only benefit. We will too.

See insert in this issue for information about the next 10-day field workshop. 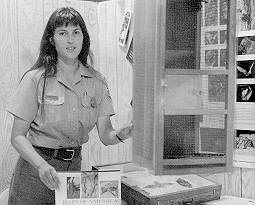 Terri Marceron works to educate both the public and her colleagues about bats. Nearly 40,000 visitors stopped at her bat booth at the Montana State Fair. 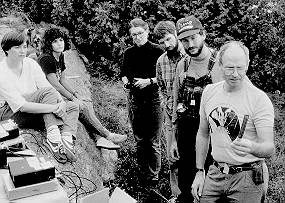 Students at the first 10-day field workshop listen to Brock Fenton (right) as he explains how they will be light-tagging bats to study feeding patterns that evening.