FROM THE MOMENT Debra Rust heard Merlin Tuttle speak about bats at the Alabama Conservancy’s Annual Meeting in 1987, she was hooked. Debra, a teacher at Midfield Elementary School near Birmingham, Alabama, went back to her classroom, taught a unit on bats to the gifted students in her enrichment classes, and told them about the work of Bat Conservation International. Her enthusiasm about bats spread; Janie Miller, then a third grade student, said, "Let’s form our own bat club and start saving bats in Alabama!" And the B.A.T Club (Bats Aren’t Terrible; Bats Are Terrific) was launched.

Three years later, the club has over 700 members and is still growing. Anyone can join, but only students in enrichment classes from grades one through four can be officers. Membership in the club now includes parents, other Midfield students, and even students from other schools, including college. "Everyone wants to join," Debra says. "It’s really become the ‘in’ thing."

One of the first things that Debra Rust teaches her students is the value of articulate public speaking when communicating environmental issues. Members of the B.A.T Club begin polishing their skills by giving programs on bats to other classes at Midfield (using BCI’s "Bats: Myth and Reality"). Now they are invited to speak at different schools in the community and to environmental groups, such as the local Sierra Club chapter.

Andy Rowell, Midfield Superintendent of Schools, said, "In 27 years in education, I have never seen such a complete ‘attitude turn-around’ as I have observed with these youngsters as they taught teachers, students, and parents in the school system and community that bats and Dracula are not synonymous, but rather that these small furry creatures are friends and preservers of our environment."

Under Debra Rust’s guidance, students in her enrichment classes are well rounded in environmental education. Not only are they concerned about bats, but about other conservation issues as well, such as whales and marine ecology, pollution, local zoning issues, and even the placement of billboards. And since all enrichment students are B.A.T Club members, their involvement is active.

One of the founding members of the B.A.T Club, Geoff Knight, was editor of the school newspaper when the club began. He wrote weekly editorials, keeping the school and board of education informed about bats and other conservation issues, encouraging students to write letters to politicians stating their views. Geoff, then a third grade student, helped Debra give the conservation report at the club’s monthly meetings, and when he joined the Sierra Club, he kept them updated about local bat conservation issues as well.

When a nearby lake, habitat for endangered gray bats, was scheduled for additional development, club members rallied and sent letters to local politicians and city council members. After two campaigns, the development went ahead, but due to the efforts of the children, it was controlled; they gained watershed protection and nothing can be built near the bat roosting cave.

Club members also gained the attention of U.S. senators and representatives when they wrote letters in
support of the Endangered Species and Clean Air Acts. The B.A.T Club has proved it is a force to be reckoned with; other environmental organizations in the state now regularly call upon them to rally support for other environmental issues.

BUT THE PRIMARY FOCUS of the B.A.T Club is bats. Its charter advocates support for bat conservation through student-led programs, projects, student-authored books, student-made posters, bumper stickers, letters to politicians and pen pals, appearances on public radio and television, and participation in local conservation club meetings.

By selling bumper stickers and memberships (25 cents for Midfield students and 50 cents for others), B.A.T Club members have raised money to buy bat houses. To provide bats with habitat and give people further opportunities to learn about bats and their needs, the club donated the bat houses to the community, placing them at the Birmingham Zoo, nature centers, and museums. Their latest donation was to the Birmingham Botanical Gardens, and more are planned.

As one of the local coordinators for Earth Day 1990 activities, Debra Rust has planned a bat education day at the Birmingham Zoo. B.A.T Club members will show one of BCI’s slide programs, give a special talk, and sell club memberships and bumper stickers. Advance publicity for the event has been widespread; all state environmental newsletters are including an article about the club’s presence at Birmingham’s Earth Day festivities. After events at the zoo, club members will present a special Earth Day bat program to students at Birmingham Southern College.

To date, the B.A.T Club has won three environmental awards. It gained a state award as the 1989 Best Club/ Organization Project for Environmental Education from the Center for Environmental Research and Service at Troy State University. Local chapters of the Sierra Club and the Alabama Conservancy each presented members of the B.A.T Club with awards of appreciation for their active involvement in the protection of the environment. Numerous articles about their activities and achievements have appeared in local newspapers, and they have been interviewed on public radio, and on a local television talk program.

Janie Miller, the first president and founder of the B.A.T Club, is now in junior high school, as is Geoff Knight. Although they have graduated from Debra Rust’s enrichment classes and are no longer eligible to be officers of the club, they both are still active members. Janie’s sister, a second grade enrichment student, is carrying on the work with Janie’s guidance.

Through the B.A.T Club, students are learning to be good stewards for Planet Earth and they are teaching their parents and their community what it means to be environmentally responsible. With teachers like Debra Rust, and students like the members of the B.A.T Club, the future of our earth looks a lot brighter. 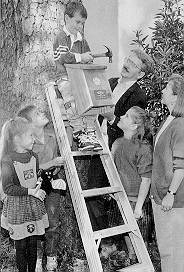 Debra Rust (right) and members of the B.A.T Club present a bat house to the Birmingham Botanical Gardens. The club, which has won three environmental awards, boasts over 700 members.