A creative program at a children’s museum gives participants a memorable lesson on bats . . .

Every October for the past seven years, the Children‘s Hands-On Museum (CHOM) of Tuscaloosa, Alabama, has gone batty. During that month, hundreds of schoolchildren throughout the region visit CHOM for a special program called "Bat Sense," which gives them a hands-on understanding of what extraordinary creatures bats are.

The program‘s theme is introduced through a Native American legend, Tiny Bat and the Ball Game. In this southeastern tribal myth, all the creatures in the forest divide into teams to play a ball game that will determine whether the "Birds" or the "Down-to-Earth Animals" (those with four legs and teeth) are best. Although Tiny Bat wants to play, the Animals will not allow him on their team because he has wings instead of four legs. The Birds do not want him on their team because he doesn‘t have feathers or a beak. Both sides consider him too little and too different. Eventually, Tiny Bat is allowed to join the Animals‘ team, and his ability to fly and carry the ball high over the goalpost leads them to triumph over the Birds. The Birds then want to claim Tiny Bat for their team, and all the players realize that, although he is different, Tiny Bat is a very special animal.

To learn more about how bats are special, the children are then divided into three groups, which rotate among several activities. One lesson uses pictures, models, and a bat skeleton to introduce children to insect-eating microbats and fruit- and nectar-eating megabats, explaining the anatomical features that distinguish the two. As the children watch slides of various bats, they show off their newly acquired knowledge. "Big ears," they call. "He eats insects!" The next slide appears, and a child cries, "That one has little ears and big eyes. He eats fruit!" As they distinguish between microbats and megabats, the children discover the important role each plays in the environment, controlling insects or pollinating plants. Even the youngest visitors can decide for themselves that because they don‘t like mosquitoes, they do like any animal that helps get rid of those annoying pests!

In another activity, the children enjoy a bat salad of bananas, mangoes, cashews and dates–foods that exist in the wild because of the role bats play in pollination and seed dispersal. The snack leads to a discussion of bat habitat, beginning with tropical rain forests and leading into a talk about local bat habitat and bat houses.

After learning about the rain forest, the children create their own tiny Honduran tent bat (Ectophylla alba) to take home. With unprocessed cotton bolls for bodies, peppercorns for eyes, and pieces of the cotton boll seed pod for ears and nose, the little bats are easily assembled and placed to roost in tents made from real leaves, just as these bats do in the rain forest. (Teacher evaluations consistently show that this is participants‘ favorite activity.)

Finally, discussion turns from bat homes to bat families, as the children learn how mother bats identify their young. The students are divided into pairs of "baby bat" and "mama bat." Each pair is assigned a unique sound to make and given two bottles containing a specific scent. The mama bats, blindfolded and wearing large posterboard wings, are then separated from their babies, who wear posterboard hats topped with small wings. Each mother bat locates her baby through the young bat‘s unique sound and scent.

The impact of this program on participating children is immediately apparent. Before leaving the museum, the children hang paper bats (upside down, of course) in a cave in CHOM‘s Indian Village. On the paper bats, each child has written one fact he or she learned about bats, from habitat to diet to anatomy. Some children, overwhelmed by all they have learned, write simply, "I love bats." The Halloween shirts and sweaters the children wear at that time of year, covered with witches, ghosts, and bats, have new meaning by the time each class leaves.

Perhaps more surprising is the effect "Bat Sense" has on parents, teachers, and museum staff. Parents often ask us where they can purchase a bat house or get the plans to build one. Teachers leave with plans to create a bat habitat in their classrooms and fill it with their own paper bats. Several CHOM staff members have adopted bats through BCI. Even confirmed bat haters leave the museum touched by these gentle creatures. Factual information about bats has often proven hard to come by, so BCI and its catalogue of educational materials have been invaluable. Slides, puppets, books, videotapes, and other materials have given staff members the knowledge and resources to offer this unique program, which has introduced thousands of children, their parents, and teachers, to the importance of bats.

BCI member Alicia R. Browne is the Coordinator of Visitor Services at the Children’s Hands-On Museum. She would like to acknowledge Jane Ingram, Director of Exhibits and Programs, who created "Bat Sense."Tiny Bat and the Ball Game: An Indian Legend was written by Margaret Zehmer Searcy and published by Tuscaloosa and Tulsa: Portals Press, 1978. 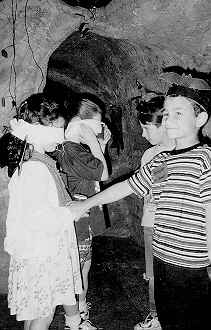 A blindfolded "mama bat" (left) has successfully found her "baby bat" by following the baby‘s unique scent and sound. 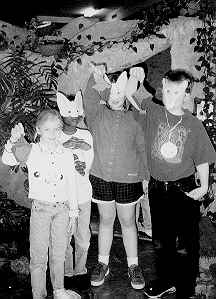 Wearing bat masks and necklaces, these second- and third-graders prepare to hang paper bats in the museum cave. Each bat cut-out bears one fact the child learned during the "Bat Sense" program.