Since I’m heading downstream and am in no hurry, I’m only using my paddle occasionally to steer the slow curves in South Carolina’s Singletary Creek. Ancient bald cypress tower above me, and a bright full moon lights my way. Even in this closed canopy forest, no other illumination is needed to navigate through the narrow channel. I paddle hard a couple of strokes to make my final turn and the bow of the canoe breaks into the open water of Mellard Lake, the normally black surface silvery by moonlight. I take in the primordial scene—tall trees casting long shadows on the shore, alligators patrolling back and forth, only their ridged backs visible, pale and ghostly in the moonglow. For an indefinite time I float serenely, listening to the barred owls and the green frog calls, savoring the peace. I’ve always had an affinity for swamps.

A couple of hours before dusk, I loaded the canoe, carefully arranging net poles and dry bags that contained the essential items for a night of bat-netting in the swamp: mist-nets, ropes, field notebook, ruler, scale, flagging, chest waders, extra clothes and, of course, duct tape. I was excited and optimistic, as I always am, about a night working in the wetland forests that still harbor a rich diversity of bats.

In North Carolina, 11 of the 16 bat species that occur in the state live in these bottomland hardwood forests. Two species, the southeastern myotis (Myotis austroriparius, above) and Rafinesque’s big-eared bat (Corynorhinus rafinesquii) are species of special concern due to their extraordinary decline in recent decades. Both are closely linked to bottomlands, a wetland habitat that has been greatly diminished.

In order to understand the most important roosting needs of bats, I had chosen a forest that was as close to pristine as possible. Draining, logging and other activities, such as changing the natural flood regimes of rivers, have dramatically altered the character of our forested wetlands, but classic remnants of these forests are protected in a few scattered locations throughout the southeastern United States including in Biedler Forest, an Audubon Society sanctuary that was established in the 1970s to preserve a 1300-acre tract of virgin cypress-tupelo gum swamp.

Throughout the summer, with funding from the US Geological Survey and the North Carolina State Museum of Natural Sciences, my research team and I attached radio transmitters to bats and tracked them to their forest roosts. While I didn’t locate any of my tagged bats on this particular night, I did find a big-eared bat in a tree I had checked numerous times but had never before seen bats use. And so it went all summer, encountering the unexpected, both good and not-so-good (like seeing the red eyeshine of 17 pairs of baby gator eyes in the pond over which I had just set mist nets and then hearing their distress calls to mom). The constants of each day were that we would sweat a lot, get really muddy, use muscles we didn’t know we had and gain a little more insight into the way swamp bats spend their days and nights.

We eventually logged hundreds of hours of night-tracking to determine foraging ranges and preferred foraging habitat and located 40 roost trees. We were surprised to find that although many of the tall stately cypress had large cavernous hollows at their bases they were not used by the bats for day roosts. All 16 of the big-eared and southeastern bats that we tagged, as well as others that we had found by surveying cavities opportunistically, were in black and tupelo gum trees. Gum trees are part of the subcanopy and do not tower high above the canopy like the cypress. The roost trees used by colonies had large diameters (one, and sometimes two, people could stand comfortably inside) and were generally characterized by having a triangular opening at the base. The cavities were chimney-like but did not continue through to the top of the tree, and terminated in a rounded dome somewhere between eight and 12 feet (2.44 to 3.66 meters) high. All roost trees were in parts of the forest that regularly flood and all were deep within the forest, not in open areas or on the forest edges.

We gathered much more data on big-eared bats than we did on southeastern bats, but found that both species used the same gum trees and switched roosts frequently. The big-eareds stayed within a localized area, where concentrations of appropriate tree cavities occurred, and the trees they moved to were, for the most part, within sight of each other. The southeastern bats moved much farther. Once gone, it was difficult to relocate them. Some trees were used by both species, but not at the same time.

As more studies are conducted on forest bats, patterns are beginning to emerge. Older forests seem particularly important, especially for roosting, and forest bats apparently need to switch roosts frequently, perhaps to avoid parasites and predators. The roosting preferences of these two species were almost identical, but the behavioral similarities ended at night. Southeastern bats flew fast and far, foraging over open waterways, while big-eared bats seemed to center their activity near their roost trees, spending most of their time in the forest. The varied foraging strategies demonstrate a need to maintain natural habitats within forested landscapes, not just a few large roost trees.

One effect of changes in our bottomland hardwood forests is that remaining forests are generally devoid of mature trees that have the structural features required to shelter big-eared and southeastern bats. Also, habitat is fragmented and Rafinesque’s big-eared bats are reluctant to cross the large, open areas between. Areas that contain concentrations of cavity trees are becoming increasingly rare and are usually separated by great distances. Even protected areas, like the Beidler Forest where I worked, are subject to events that destroy large areas of habitat. Hurricane Hugo ripped through Beidler Forest in 1989, uprooting many old trees. And what happens to the bats when the tree cavities are flooded and unavailable during heavy rains? Do the bats have alternative sites on higher ground? Logging and development was easier and safer in the uplands, so mature trees in such areas are now mostly gone.

Fortunately, forest bats are now receiving much more attention than in the past. Each species has unique needs, and bat researchers must gather much data on the extent of differences in order to permit management planning adequate to maintain diversity in unique lowland communities. In the Southeast, our bottomland forests are important reservoirs of wildlife. Protecting the bats and other animals, the real wood nymphs and fairies of our forests, will require substantial foresight and longterm planning.

Mary Kay Clark (opposite page, netting swamp bats) is Curator of Mammals at the N.C. State Museum of Natural Sciences, Raleigh, North Carolina, and is chair of the Southeastern Bat Diversity Network. 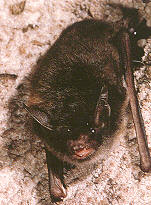 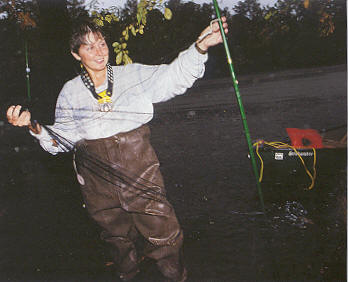 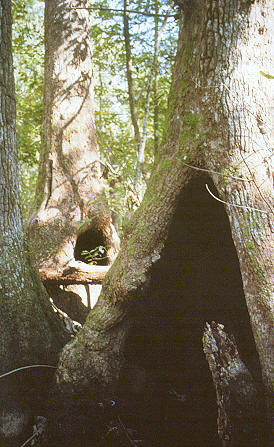 Tree cavities in cypress-tupelo swamps (above) are important roosts for Rafinesque’s big-eared bats (below). 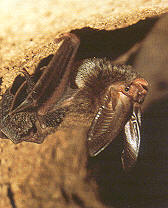